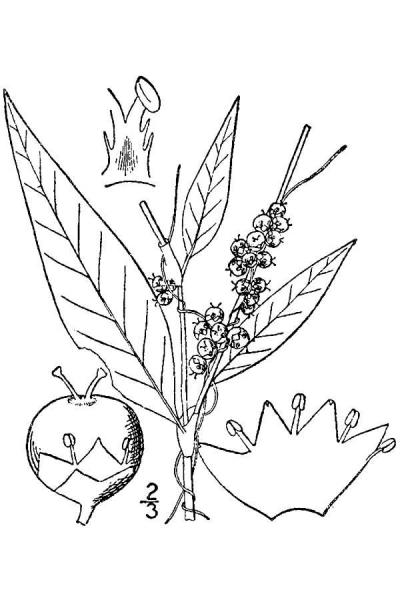 The first collections were from Long Island with the earliest known from 1896. The common name may come from a Middle Dutch word meaning the yoke of an egg referring to the yellow color of some of the flowers of Cuscuta. Dodder is an annual but some of its connections to the host plant (haustoria) may survive the winter and start new plants already on the host in the spring. The vines always seem to wrap around the host plant in a counterclockwise direction. Dodder is a speed demon when it comes to finding a host. Germination, emergence and attachment to the host may occur in as little as 24 hours and the seedling must find a host in 5-10 days or it will die (Wikipedia contributors).

There are three existing populations but the total size of each population is unknown. In addition, three old reports of plant locations remain unconfirmed and two locations have been extirpated. Two additional locations known from 1949 and 1967 respectively, have not been resurveyed.

Short-term trends are unknown due to the lack of revisits to all of the known populations.

This plant has always been very rare in New York and long-term trends remain stable. Not all of the old records have been resurveyed but two are now considered extirpated while two new locations have been found.

No threats are known at this time but since the populations are in heavily-used parks there may be threats from direct human disturbance and invasive species.

This species needs disturbance to reduce competition from woody plants and more aggressive herbaceous plants but too much direct disturbance to the plants will reduce or eliminate the population. Its habitat could be disturbed in the non-growing season, by mowing, brush cutting or prescribed fire for example, to open it up for seed germination and colonization but direct disturbance should be avoided during the growing season.

Research is needed into the life history of this plant to see if it can be surveyed every year and how populations move around and change size. Host plant preferences should also be studied.

The few New York collections have been from cattail marshes and wet meadows, with the Cuscuta polygonorum growing on Typha or Polygonum species (New York Natural Heritage Program 2010). Moist shores and riverbanks, parasitic on Polygonum and other hosts (Rhoads and Block 2000). Low ground, on Polygonum, Lycopus, Penthorum and other herbs (Fernald 1970).

This species is known from Queens to Suffolk counties on Long Island. It is also currently known from one location in Niagara County. There are unconfirmed reports from Ulster County in the 1960s, Dutchess County in 1985 and Monroe County in 1986.

This parasitic plant is most common in the Midwest from Ohio west to Arkansas and Oklahoma, and north to North Dakota. There are scattered populations from eastern Texas northeast through Kentucky, Virginia, and Maryland to Pennsylvania, southeastern New York and Massachusetts.

Dodders are parasitic, annual plants, the seedlings attaching to a host plant soon after they sprout. The mature plants lack chlorophyll, roots, or leaves. They consist only of the pale yellow or orangish stems, attached to the host plant via numerous haustoria (suckers), and the compact (2 mm) flowers. With prolific individuals, the overall appearance is of a tangled mass of bumpy orange string sprawled and twining over the host plant. Upon closer inspection, Smartweed Dodder has nearly sessile, white, 4-parted flowers which form dense clusters. The sepals are united at the base and triangular with acute, erect or ascending tips. The fruits are commonly wider (3 mm) than they are high and cupped at the base by the persistent corolla (Gleason and Cronquist 1991).

This species is best identified when in flower.

Cuscuta cephalanthi and C. coryli are the other two New York dodder species with flower parts in fours. C. cephalanthii has rounded corolla lobes, and C. coryli has acute but papillate lobes with the tips inflexed. Cuscuta polygonorum has smooth, acute corollas with the tips erect or ascending (Rhoads and Block 2000, Gleason and Cronquist 1991).

The best time to identify this plant is September when it has both flower and fruit characters.

The time of year you would expect to find Smartweed Dodder flowering and fruiting in New York.