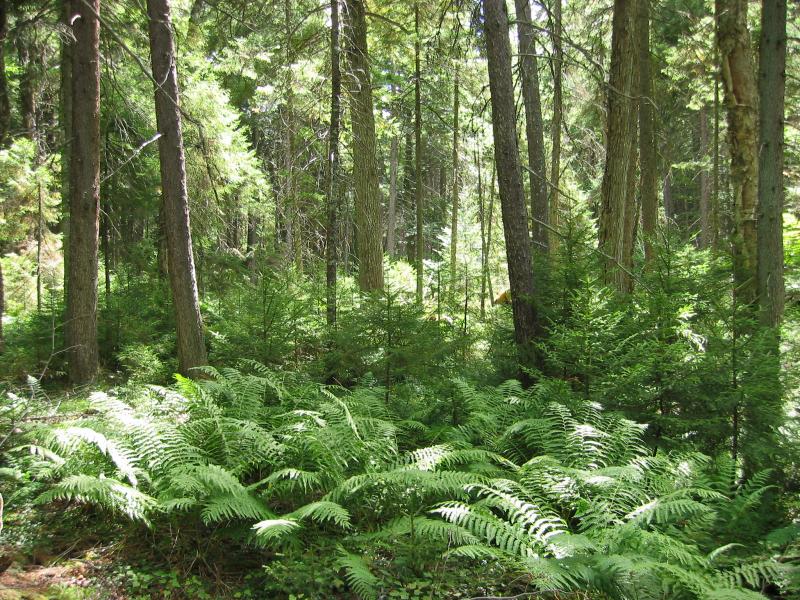 Spruce resin from red and black spruce trees has been used to seal seams and waterproof birch bark canoes. This resin was also used as a gum by native peoples and later by early American settlers. Spruce gum was first manufactured 1845, making it the first commercial chewing gum in the United States. By 1890, it was replaced by chicle from the Latin American sapodilla tree. Today, most gum is produced with synthetic materials.

There are several hundred occurrences statewide, but very few are currently documented by New York Natural Heritage. A few documented occurrences have good viability and a few are protected on public land or private conservation land. This community is limited to the northern portion of the state and is concentrated in the Central Adirondacks where there are several very large, high quality examples. The current trend of this community is probably stable for occurrences on public land and private conservation land, or declining slightly elsewhere due to moderate threats related to development pressure and logging.

The number and acreage of spruce flats in New York have probably remained stable at protected sites or declined slightly elsewhere in recent decades as a result of logging, agriculture, and development.

The number and acreage of spruce flats in New York have probably declined substantially from historical numbers likely correlated with past logging, agriculture, and development.

Threats to forests in general include changes in land use (e.g., clearing for development), forest fragmentation (e.g., roads), and invasive species (e.g., insects, diseases, and plants). Other threats may include over-browsing by deer, fire suppression, and air pollution (e.g., ozone and acidic deposition). When occurring as expansive forests, the largest threat to the integrity of spruce flats are activities that fragment the forest into smaller pieces. These activities, such as road building and other development, restrict the movement of species and seeds throughout the entire forest, an effect that often results in loss of those species that require larger blocks of habitat (e.g., black bear, bobcat, certain birds). Additionally, fragmented forests provide decreased benefits to neighboring societies from services these societies often substantially depend on (e.g., clean water, mitigation of floods and droughts, pollination in agricultural fields, and pest control) (Daily et al. 1997). Spruce flats are threatened by development (e.g., residential), either directly within the community or in the surrounding landscape. Other threats include habitat alteration (e.g., roads, excessive logging, mining, flooding of adjacent waterbodies), and recreational overuse (e.g., ATVs, snowmobiles, hiking trails, campgrounds). A few spruce flats are threatened by invasive species from adjacent developed areas. Intentionally planted pine species may become established and become a minor threat to a few examples. Spruce flats may be threatened by acid rain deposition, but perhaps less than other higher elevation natural communities (US EPA 2005). Spruce budworm may be considered a threat to occurrences of spruce flats that experience extreme outbreaks, especially if it coincides with other stresses and reduces tree regeneration. The spruce budworm (Choristoneura fumiferana) is a native insect that creates canopy gaps in spruce and fir forests of the Eastern United States and Canada. Since 1909, there have been waves of budworm outbreaks throughout the eastern United States and Canada. The states most often affected are Maine, New Hampshire, New York, Michigan, Minnesota, and Wisconsin (Kucera and Orr 1981). Balsam fir is the primary host tree for budworm in the Eastern United States, although white, red, and black spruce are known to be suitable host trees. Spruce budworm may also feed on tamarack, pine, and hemlock. Spruce mixed with balsam fir is more likely to show signs of budworm infestation than spruce in pure stands (Kucera and Orr 1981).

Management should focus on activities that help maintain regeneration of the species associated with this community. Although it is not currently a threat to spruce flats, deer have been shown to have negative effects on forest understories (Miller et al. 1992, Augustine & French 1998, Knight 2003) and management efforts should strive to ensure that regenerating trees and shrubs are not so heavily browsed that they cannot replace overstory trees. Avoid cutting old-growth examples and encourage selective logging areas that are under active forestry.

Research the composition and collect sufficient plot data for spruce flats statewide in order to characterize variations and clearly separate this community from balsam flats, spruce-fir swamp, and spruce-northern hardwood forests. Regularly assess the presence and degree of impact that spruce budworm has on this community.

This community is limited to the northern portion of the state. It is concentrated in the Adirondack Mountains where it is represented by large patch to near matrix size examples. It is probably also along the Saint Lawrence and Lake Champlain Lowlands. It is peripheral in the state on the Rensselaer Plateau and Tug Hill.

This community is limited to the northern fringe of the Eastern United States and much of southeastern Canada. This range is estimated to span north to central Ontario and Quebec, west to Minnesota, south to northern Michigan and northern New York, and east to Nova Scotia and Newfoundland.

A mixed forest that occurs along the borders of swamps and in low flats along lakes and streams in the Adirondacks, often in a tight mosaic with balsam flats. Soils are strongly podzolized, loamy to sandy, and seasonally moist, but not saturated or peaty. The canopy is usually dominated by red spruce (Picea rubens) and red maple (Acer rubrum), mixed with a variety of possible associates. Heath species dominate the shrub layer, and the forest floor is a carpet of bryophytes and herbs.

Spruce flats have a canopy dominated by red spruce (Picea rubens) and red maple (Acer rubrum), with possible associates yellow birch (Betula alleghaniensis), black cherry (Prunus serotina), and eastern hemlock (Tsuga canadensis). The shrub layer is sparse and made up of heath species such as sheep laurel (Kalmia angustifolia) and blueberries (Vaccinium angustifolium, V. myrtilloides). The forest floor is covered with a dense carpet of bryophytes, such as Pleurozium schreberi, Hylocomium splendens, and Bazzania trilobata, and herbs such as bunchberry (Cornus canadensis), snowberry (Gaultheria hispidula), and goldthread (Coptis trifolia). A less common variant of this community is codominated by black spruce (Picea mariana) and tamarack (Larix laricina).

Known examples of this community have been found at elevations between 1,380 feet and 2,589 feet.

Many of the canopy species of this community are best recognized during the growing season (May to September); the luxurious carpet of mosses can be observed much of the year when snow is absent. 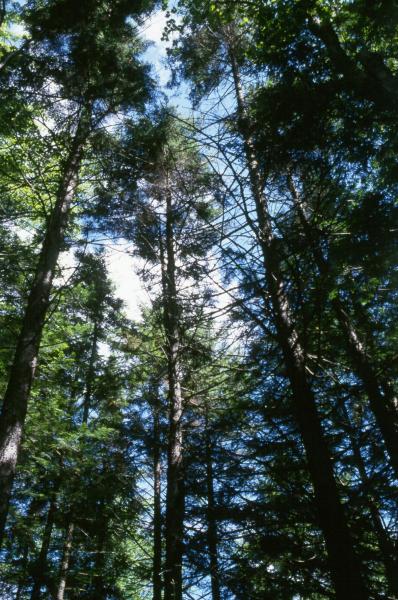 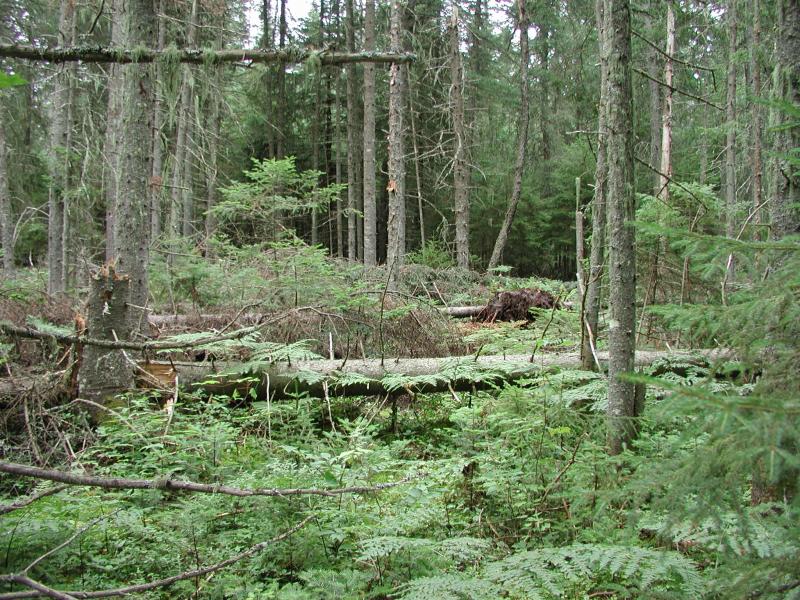 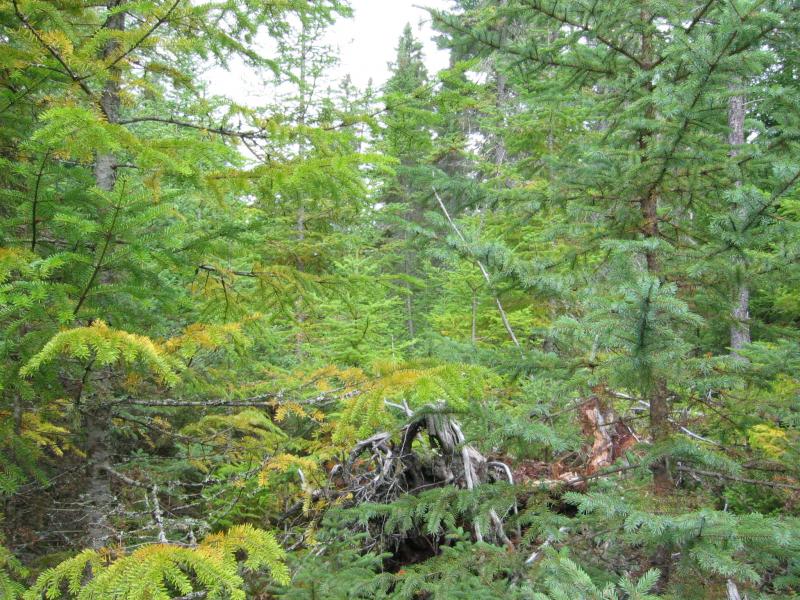 This figure helps visualize the structure and "look" or "feel" of a typical Spruce Flats. Each bar represents the amount of "coverage" for all the species growing at that height. Because layers overlap (shrubs may grow under trees, for example), the shaded regions can add up to more than 100%.