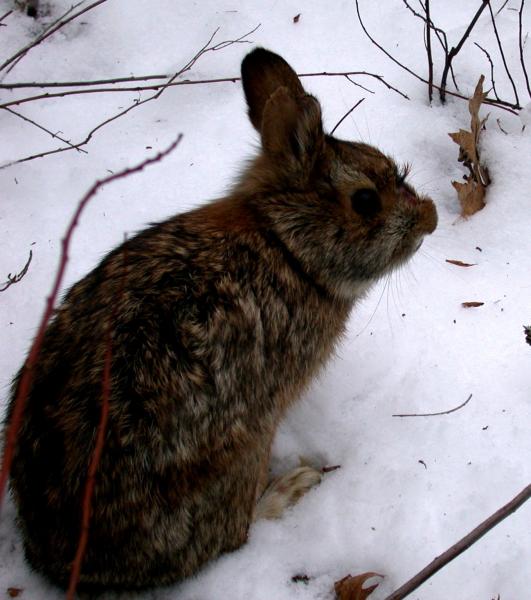 The New England Cottontail is difficult to tell apart from the more common Eastern Cottontail, unless the rabbit is captured. Scientists typically perform genetic testing on rabbit scat (droppings) to determine which species are present.

The New England cottontail has disappeared from many historical locations including Warren County, the Catskills, and Long Island. It was last documented in Rensselaer County in the 1960s (Benton and Atkinsin 1964). Its decline throughout its range resulted from forest maturation, habitat loss, habitat fragmentation, and competition with eastern cottontails (Litvaitis et al. 2006). In New York, it is now limited to a few fragmented populations in Columbia, Dutchess, Putnam, and Westchester counties.

The species was last found in Rennselaer County in the 1960s, and has declined elsehwere. It is now limited to a few fragmented populations in Columbia, Dutchess, Putnam, and Westchester counties (Litvaitis et al. 2006). Pellet surveys conducted since 2009 have turned up new locations for New England cottontails but have not substantially increased the size of the known range in NY.

The historical record includes specimens from Warren County to the north, west of the Hudson River in the Catskills, and south to Long Island, but recent records from these locations are lacking. The current distribution is thought to be restricted to the east side of the Hudson River and includes fragmented populations in Columbia, Dutchess, Putnam, and Westchester counties.

Changing habitat, fragmentation of forest lands, and competition with the eastern cottontail (Sylvilagus floridanus) have likely contributed to the decline of this species and remain as threats (Litvaitis 1993, Tash and Litvaitis 2007).

Identify potential habitat within the historic range of the species, modify this habitat to increase its suitability, and reintroduce New England cottontails to these locations (Litvaitis and Villafuerte 1996, Tash and Litvaitis 2007).

Comparisons of habitat within extant and historical sites are necessary to see if there are significant differences between the two that may have led to the decline of the New England cottontail (Tash and Litvaitis 2007).

The New England cottontail is an early-successional species, preferring open woods, disturbed areas, shrubby areas, thickets, and marshes (Hamilton and Whitaker 1979). Specimens collected in Rensselaer County in the 1960s were from second-growth hardwoods with hemlocks at elevations greater than 1000 feet, and scattered swampy areas with stands of spruce and conifer plantations (Benton and Atkinson 1964). Current populations in southeastern New York can be found in isolated habitat patches that have undergone some form of disturbance such as agricultural fields and edges, and occasionally, brushy edges of transportation corridors (Tash and Litvaitis 2007).

True identification can only be made thrugh DNA analysis or skull characteristics (Hamilton and Whitaker 1979, Ruedas et al. 1989).

Breeding season is January to September, peaking from March to July. The gestation period is 28 days. Litter size is genrally 3-5 or occasionally up to 8, with up to several litters per year. Litters are smaller but more numerous than in the eastern cottontail, resulting in about the same productivity. Most individuals first breed in their second season, but 18% of pregnancies are in juveniles (Dalke 1942, Hamilton and Whitaker 1979).

In the spring and summer, New England cottontails feed on grasses and herbs including goldenrods, crabgrass, and chickweed. In the fall and winter, their diet consists of seedlings, bark, twigs of gray birch, red maple, and aspen, and shrubs including blackberry, dewberry, and willow (Dalke and Sime 1941).

New England Cottontails are most active at dawn and dusk. The breeding season is typically from March to September.

The time of year you would expect to find New England Cottontail active and reproducing in New York. 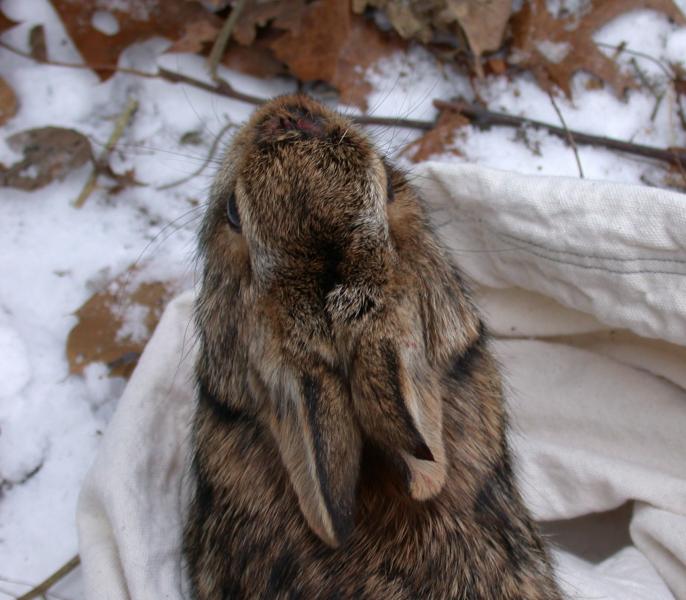 Chapman, J. A., et al. 1992. Systematics and biogeography of the New England cottontail, SYLVILAGUS TRANSITIONALIS (Bangs, 1895), with the description of a new species from the Appalachian Mountains. Proc. Biol. Soc. Washington 105(4):841-866.

US Fish and Wildlife Service. 2004. Endangered and threatened wildlife and plants; a 90-day finding on a petition to list the New England cottontail as threatened or endangered. Federal Register. 69(125):39395-39400.