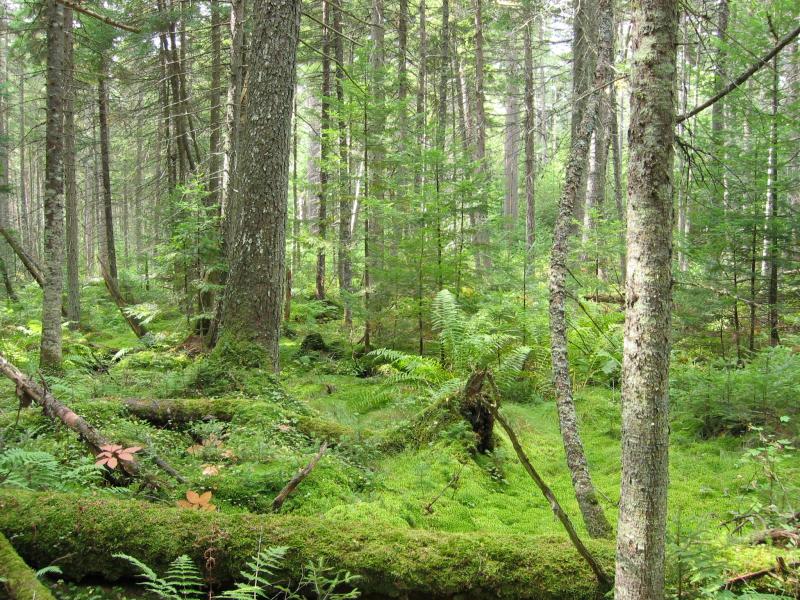 Red spruce is the common dominant in spruce-fir swamps. However, in the Adirondacks black spruce may replace red spruce as the dominant tree. In areas where red spruce and black spruce inhabit the same community, the two may hybridize. Black spruce is distinguishable from red spruce by its smaller dull gray cones on short stalks, which curve downward and remain attached.

There are several hundred occurrences statewide. Some documented occurrences have good viability and several are protected on public land or private conservation land. This community is widespread throughout the northern half of New York, and includes a few large, high quality, old-growth examples. The current trend of this community is probably stable for occurrences on public land, or declining slightly elsewhere due to moderate threats that include logging, alteration of the natural hydrology, and invasive species.

The number and acreage of spruce-fir swamps in New York have probably declined slightly, or remained stable, in recent decades as a result of wetland protection regulations.

The number and acreage of spruce-fir swamps in New York have probably declined substantially from historical numbers likely correlated with logging, agricultural, and development.

Spruce-fir swamps are threatened by development (e.g., agriculture, residential, roads, mining operations), habitat alteration (e.g., excessive logging, ditching, filling, pollution/nutrient run-off, plantations), and recreational overuse (e.g., hiking trails, ATVs). Alteration to the natural hydrological regime is also a threat to this community (e.g., impoundments, blocked culverts, beaver). Spruce-fir swamps may be threatened by spruce decline due to acid rain deposition in high elevation examples (US EPA 2005). A few spruce-fir swamps are threatened by invasive species, such as reedgrass (Phragmites australis). Spruce budworm may be considered a threat to occurrences of spruce-fir swamp that experience extreme outbreaks, especially if it coincides with other stresses and reduces tree regeneration. The spruce budworm (Choristoneura fumiferana) is a native insect that creates canopy gaps in spruce and fir forests of the Eastern United States and Canada. Since 1909, there have been waves of budworm out breaks throughout the Eastern United States and Canada. The states most often affected are Maine, New Hampshire, New York, Michigan, Minnesota, and Wisconsin (Kucera and Orr 1981). Balsam fir is the is the primary host tree for budworm in the Eastern United States, although white, red, and black spruce are known to be suitable host trees. Spruce budworm may also feed on tamarack, pine, and hemlock. Spruce mixed with balsam fir is more likely to show signs of budworm infestation than spruce in pure stands (Kucera and Orr 1981).

Where practical, establish and maintain a natural wetland buffer to reduce storm-water, pollution, and nutrient run-off, while simultaneously capturing sediments before they reach the wetland. Buffer width should take into account the erodibility of the surrounding soils, slope steepness, and current land use. Wetlands protected under Article 24 are known as New York State "regulated" wetlands. The regulated area includes the wetlands themselves, as well as a protective buffer or "adjacent area" extending 100 feet landward of the wetland boundary (NYS DEC 1995). If possible, minimize the number and size of impervious surfaces in the surrounding landscape. Avoid habitat alteration within the wetland and surrounding landscape. For example, roads and trails should be routed around wetlands, and ideally not pass through the buffer area. If the wetland must be crossed, then bridges and boardwalks are preferred over filling. Restore past impacts, such as removing obsolete impoundments and ditches in order to restore the natural hydrology. Prevent the spread of invasive exotic species into the wetland through appropriate direct management, and by minimizing potential dispersal corridors, such as roads. Develop a plan to control or eliminate spruce budworm at sites where it is a problem.

Regularly assess the presence and degree of impact that spruce budworm has on this community. Research composition of spruce-fir swamps statewide in order to characterize variations. Collect sufficient plot data to support the recognition of several distinct spruce-fir swamp types based on composition and by ecoregion. For example, southern New York examples tend to lack balsam fir (Abies balsamea). Confirm the identification and the dominance of red spruce (Picea rubens) vs. black spruce (P. mariana) at all sites.

This community is widespread throughout the northern half of New York. It is concentrated in the Adirondack Subsection of the Northern Appalachian Ecoregion where it reaches large patch size. Scattered small patch examples occur in the Great Lakes, Lower New England (e.g., Rensselaer Plateau), and High Allegheny Plateau (e.g., probably the Catskill Mountains and Southern Tier) Ecoregions, as well as the Tug Hill section of the Northern Appalachian Ecoregion.

The range of this community is estimated to span northeast to Nova Scotia, northwest possibly to Ontario, southwest possibly to Pennsylvania, and southeast to the Berkshire Mountains of Massachusetts and the Rensselaer Plateau of New York.

A conifer swamp with little to no peat development that typically occurs in a drainage basin, at the edge of a lake or pond, or along gentle slopes of islands where there is some nutrient input from groundwater discharge or subsurface flow. These swamps are usually dense, with a fairly closed canopy (80 to 90% cover). The dominant tree is usually red spruce. Codominant trees include balsam fir and red maple. In the Catskills, balsam fir may be absent, and in the Adirondacks, black spruce or white spruce may replace red spruce as a dominant tree. The shrub layer is often sparse; characteristic and dominant shrubs include mountain holly and sapling canopy trees. Cinnamon fern is a characteristic herb and patches of peat mosses can be common.

A conifer swamp with dense canopy cover that is dominated by red spruce. Common codominant trees include balsam fir and red maple.

Known examples of this community have been found at elevations between 448 feet and 4,576 feet.

The striking evergreen canopy of a spruce-fir swamp can be enjoyed year-round, but the community is most lush in mid to late summer when the ferns and mosses are at their peak. 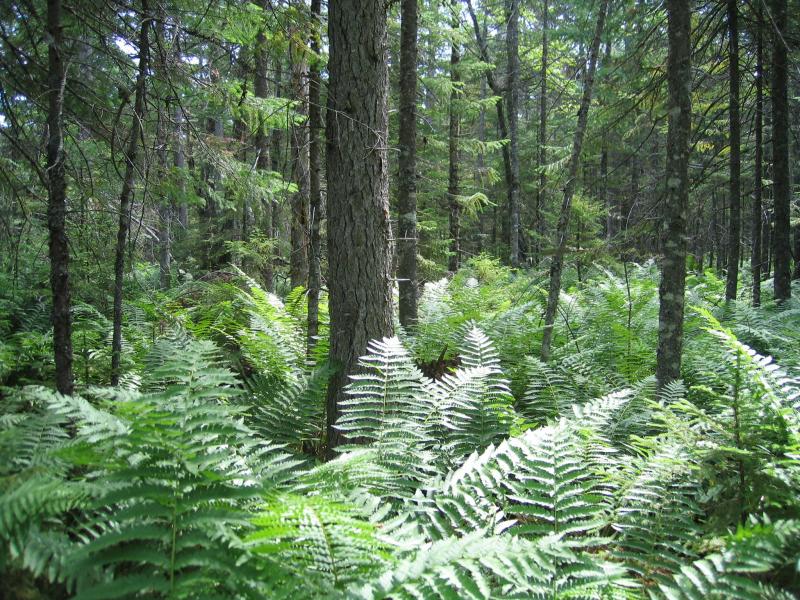 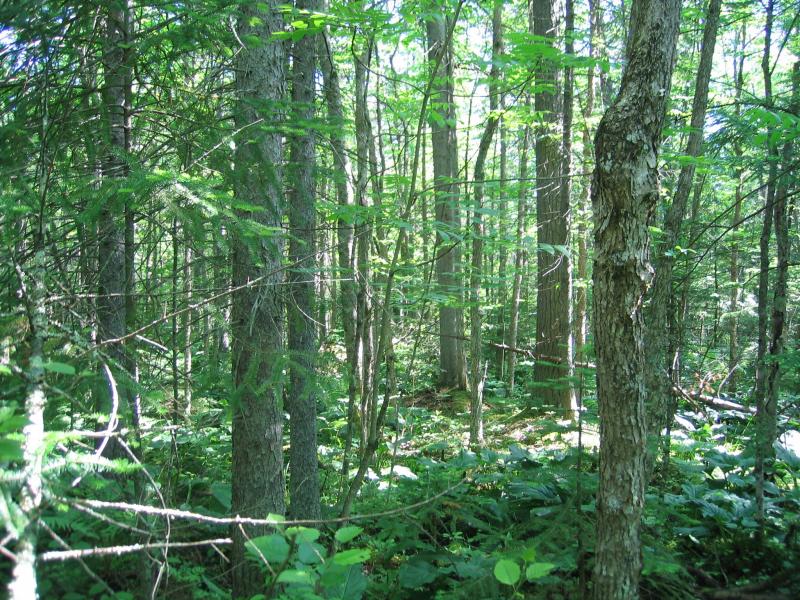 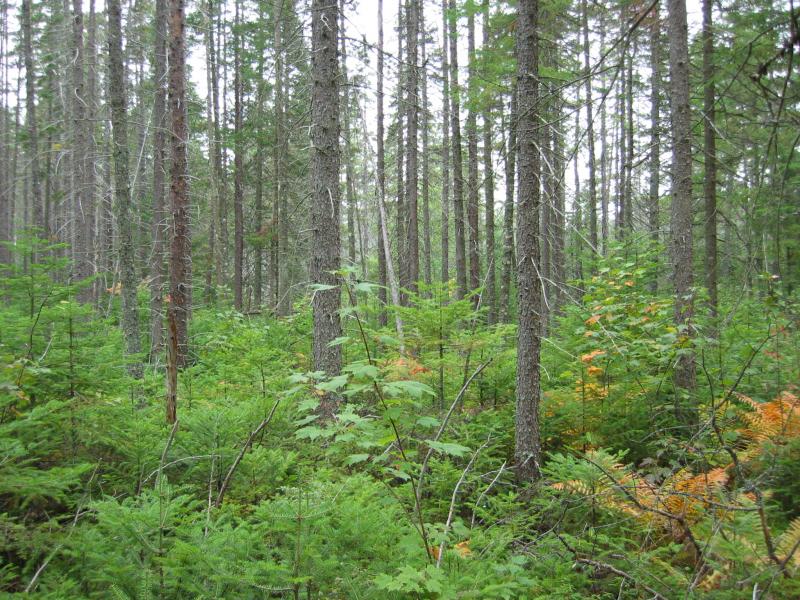 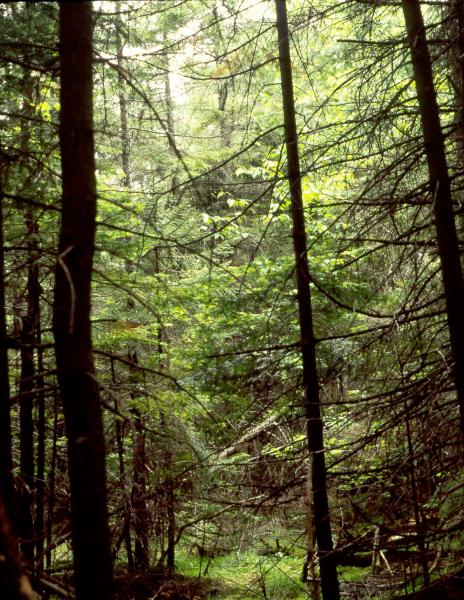 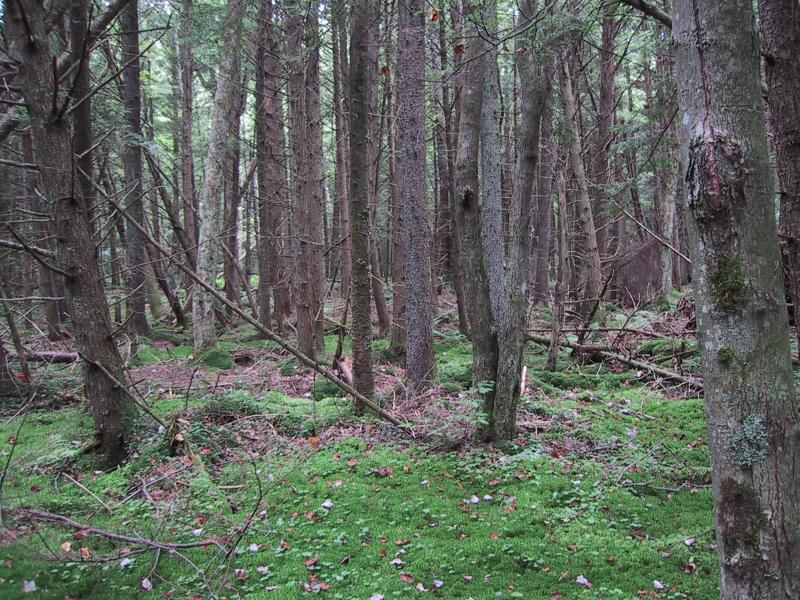 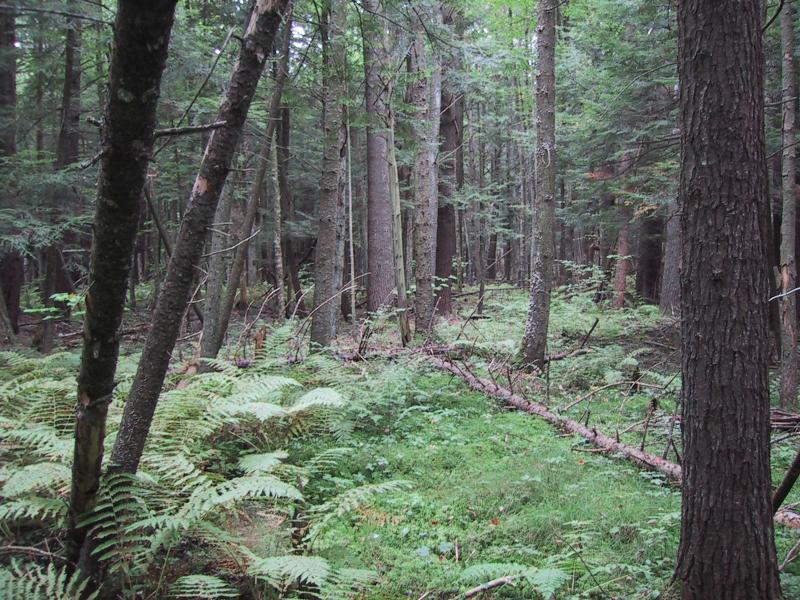 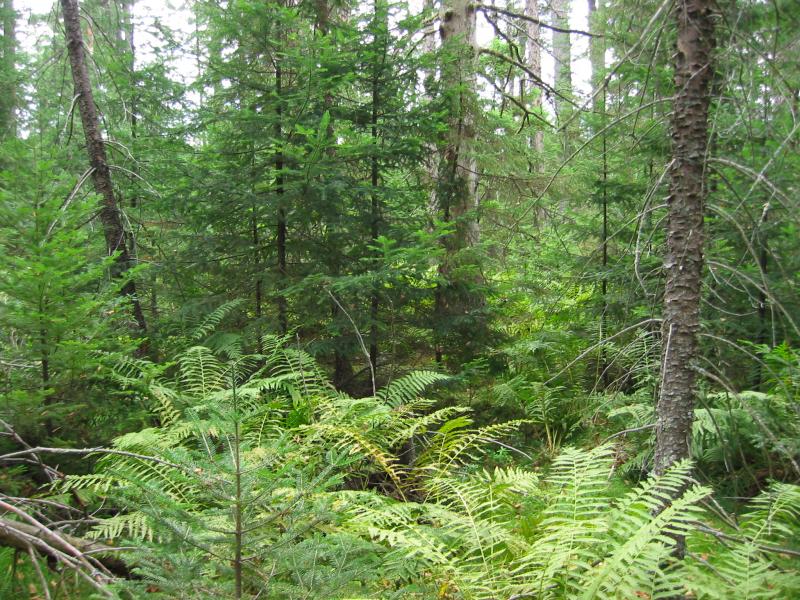 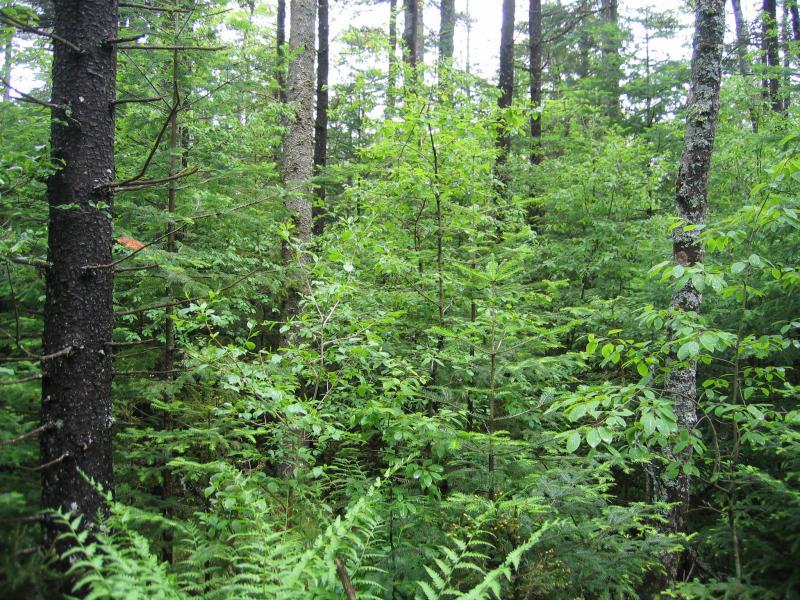 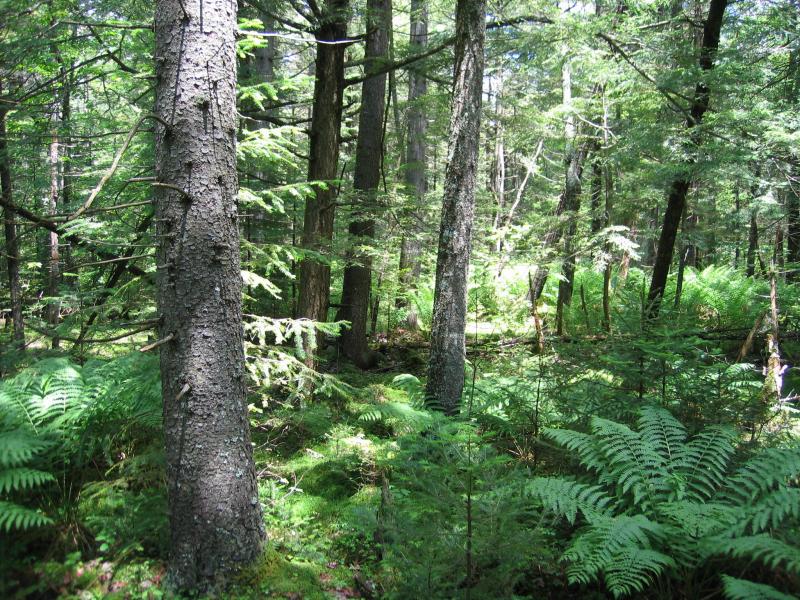 This figure helps visualize the structure and "look" or "feel" of a typical Spruce-Fir Swamp. Each bar represents the amount of "coverage" for all the species growing at that height. Because layers overlap (shrubs may grow under trees, for example), the shaded regions can add up to more than 100%.