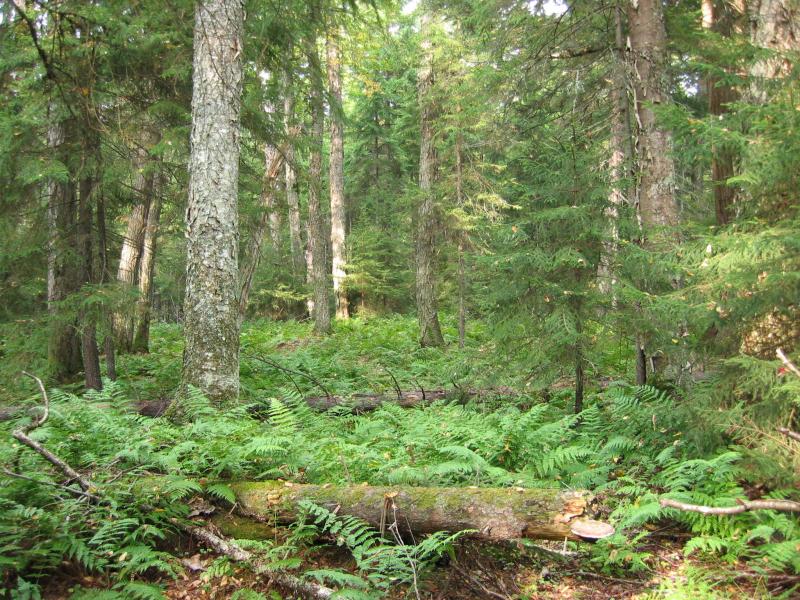 There are several hundred occurrences statewide. A few documented occurrences have good viability and several are protected on public land or private conservation land. This community has a very limited statewide distribution and includes several very large, high quality, old-growth examples. The current trend of this community is probably stable for occurences on public land and private conservation land, or declining slightly elsewhere due to moderate threats related to intensive logging, acid rain deposition, and development pressure.

The number and acreage of spruce-northern hardwood forests in New York have probably declined moderately in recent decades as a result of intensive logging, agriculture, and development.

The number and acreage of spruce-northern hardwood forests in New York have probably declined substantially from historical numbers, likely correlated with past logging, agiculture, and other development.

Threats to forests in general include changes in land use (e.g., clearing for development), forest fragmentation (e.g., roads, intensive logging), and invasive species (e.g., insects, diseases, and plants). Other threats may include over-browsing by deer, fire suppression, and air pollution (e.g., ozone and acidic deposition). Examples of this community that occur at higher elevations (e.g., >3,000 feet) may be more vulnerable to the adverse effects of atmospheric deposition and climate change, especially acid rain and temperature increase. When occurring as expansive forests, the largest threat to the integrity of spruce-northern hardwood forests are activities that fragment the forest into smaller pieces. These activities, such as road building and other development, restrict the movement of species and seeds throughout the entire forest, an effect that often results in loss of those species that require larger blocks of habitat (e.g., black bear, bobcat, certain birds). Additionally, fragmented forests provide decreased benefits to neighboring societies of services these societies often substantially depend on (e.g., clean water, mitigation of floods and droughts, pollination in agricultural fields, and pest control) (Daily et al. 1997). Spruce budworm may be considered a threat to occurrences of spruce-northern hardwood forest that experience extreme outbreaks, especially if it coincides with other stresses and reduces tree regeneration. The spruce budworm (Choristoneura fumiferana) is a native insect that creates canopy gaps in spruce and fir forests of the Eastern United States and Canada. Since 1909, there have been waves of budworm outbreaks throughout the Eastern United States and Canada. The states most often affected are Maine, New Hampshire, New York, Michigan, Minnesota, and Wisconsin (Kucera and Orr 1981). Balsam fir is the is the primary host tree for budworm in the Eastern United States, although white, red, and black spruce are known to be suitable host trees. Spruce budworm may also feed on tamarack, pine, and hemlock. Spruce mixed with balsam fir is more likely to show signs of budworm infestation than spruce in pure stands (Kucera and Orr 1981). Spruce-northern hardwood forests at higher elevations may be threatened by acid rain deposition. The ability of forest soils to resist, or buffer, acidity depends on the thickness and composition of the soil, as well as the type of bedrock beneath the forest floor. Places in the mountainous northeast, like New York's Adirondack and Catskill Mountains, have thin soils with low buffering capacity. Forests in high mountain regions often are exposed to greater amounts of acid than other forests because they tend to be surrounded by acidic clouds and fog that are more acidic than rainfall. When leaves are frequently bathed in this acid fog, essential nutrients in their leaves and needles are stripped away. This loss of nutrients in their foliage makes trees more susceptible to damage by other environmental factors, particularly cold winter weather (US EPA 2005).

Management should focus on activities that help maintain regeneration of the species associated with this community. Deer have been shown to have negative effects on forest understories (Miller et al. 1992, Augustine & French 1998, Knight 2003) and management efforts should strive to ensure that regenerating trees and shrubs are not so heavily browsed that they cannot replace overstory trees when required to do so. Avoid cutting old growth examples and encourage selective logging areas that are under active forestry.

Research the composition and collect sufficient plot data for spruce-northern hardwood forests statewide in order to characterize variations and clearly separate this community from spruce flats and balsam flats. Regularly assess the presence and degree of impact that spruce budworm has on this community.

This community is limited to the northern portion of the state and areas of high elevation elsewhere. It is concentrated in the Northern Appalachian Ecoregion of the Adirondack Mountains, where it forms the matrix forest, and Tug Hill Plateau. It is also common in the Saint Lawrence and Lake Champlain Lowlands of the Great Lakes Ecoregion. It is peripheral in the High Allegheny Plateau and Lower New England Ecoregions, where it occurs in small patches, from the Catskill Peaks, Rensselaer Plateau and Northern Taconic Mountains.

This community is suspected to span north to southern Quebec, southwest to the Catskill Mountains of New York, southeast to the Berkshire Mountains of Massachusetts, and northeast to Nova Scotia.

In the Adirondacks and Catskills the spruce-northern hardwood forests generally occur in the transition zone between lower elevarion beech-maple mesic forests and the higher elevation mountain spruce-fir forests. The spruce trees usually have at least 25% cover and tend to be tall and straighter than the spruce in higher elevation communities that are exposed to wind stress.

Known examples of this community have been found at elevations between 1,340 feet and 3,770 feet.

Several wildflower species of spruce-northern hardwood forests can be observed in bloom throughout the spring and summer. During the spring, flowers of bluebead lily (Clintonia borealis), and Canada mayflower (Maianthemum canadense) appear on the forest floor, followed by bunchberry (Cornus canadensis), goldthread (Coptis trifolia), and wood-sorrel (Oxalis montana). 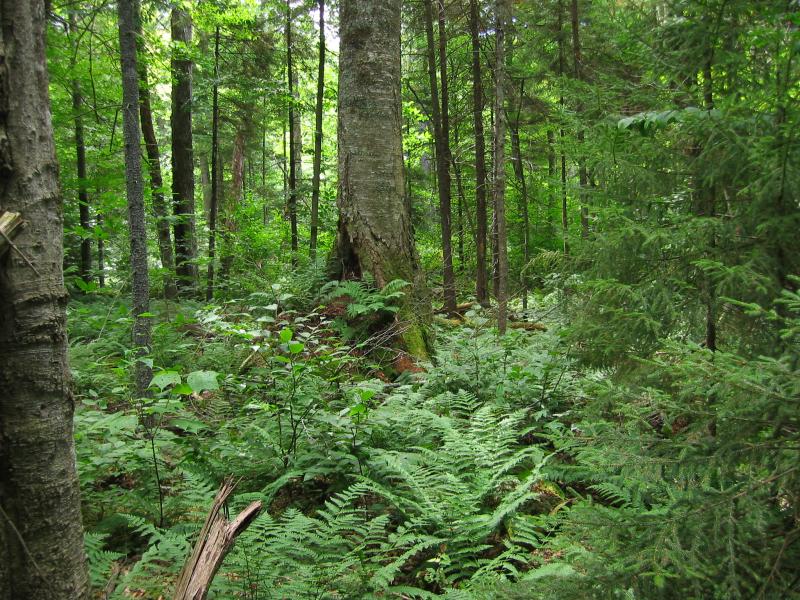 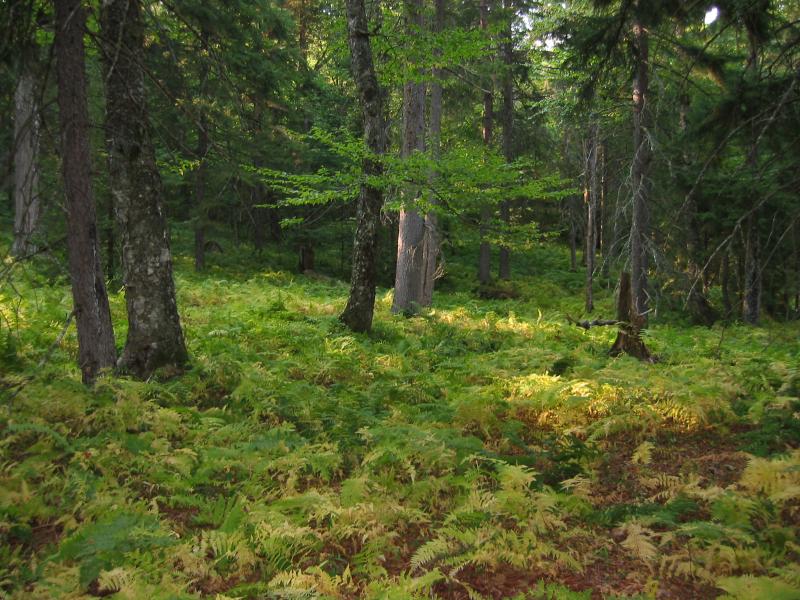 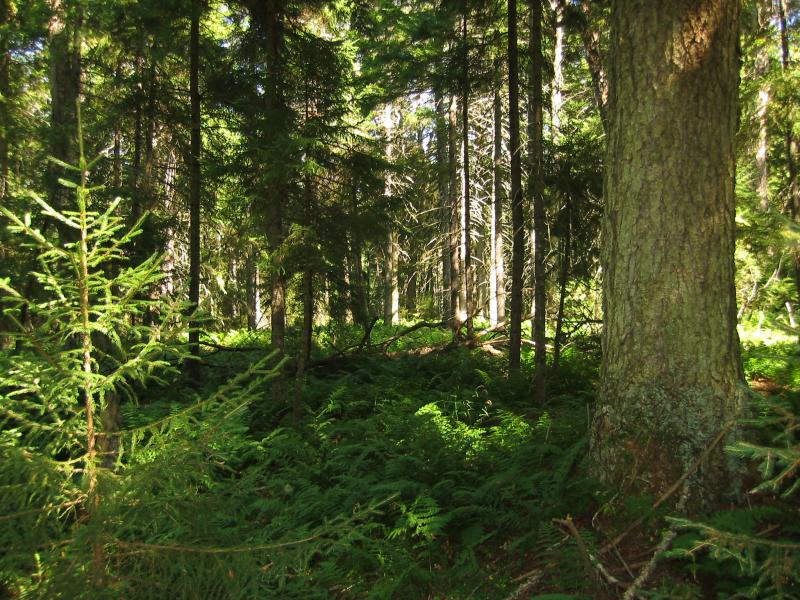 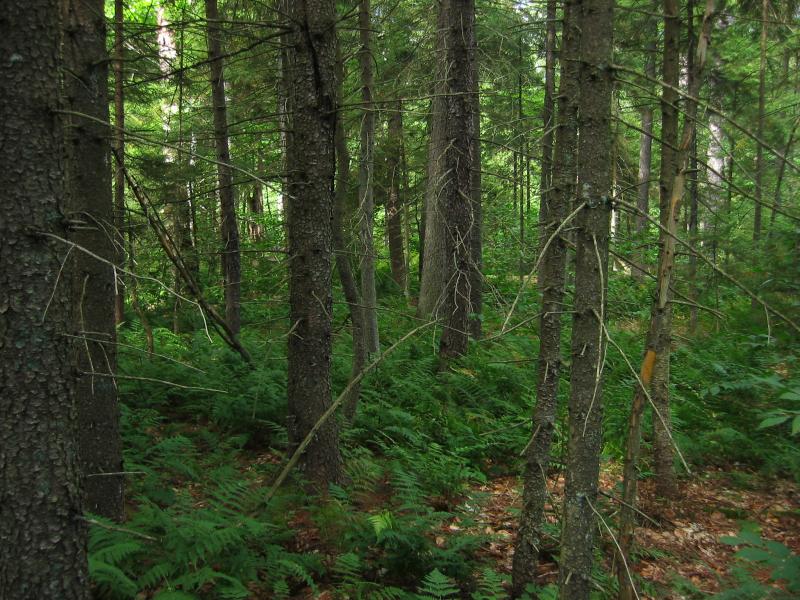 This figure helps visualize the structure and "look" or "feel" of a typical Spruce-Northern Hardwood Forest. Each bar represents the amount of "coverage" for all the species growing at that height. Because layers overlap (shrubs may grow under trees, for example), the shaded regions can add up to more than 100%.