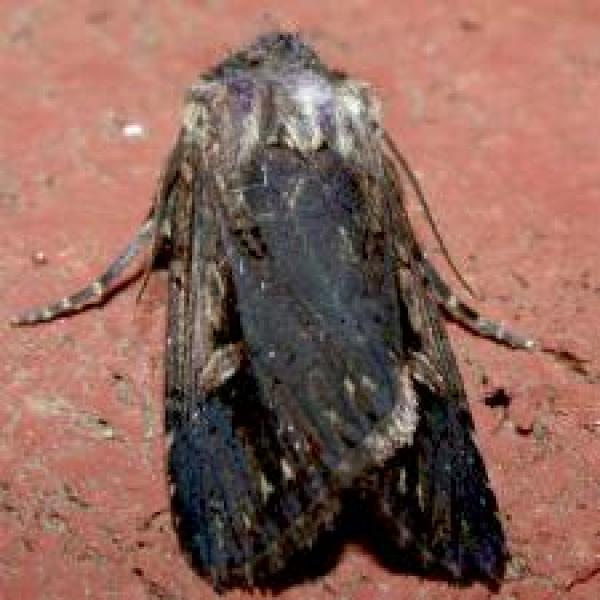 Larvae of this species burrow underground during the day, safe from above-ground predators. The larvae are best adapted to sandy areas in which it is easy to burrow, where, as expected, this moth tends to be most abundant (Wagner et al. 2008).

Habitat for this moth is potentially abundant. However, the moth might be restricted to the coastal plain, as it is in New Jersey. Four populations have been documented in the state on Long Island and a nearby island. Two of these were first documented in 2007. Additional surveys are needed to better understand the status and distribution of this moth in the state.

The short-term trend for this species in New York State appears to be stable. At one of four documented populations in the state, similar numbers of moths were captured in 1995 and 2000, resulting in nearly 30 adults captured over the course of the two years. Each of the other three populations were first documented in 1997 or 2007 and have not been surveyed since.

The long-term trend for this species in New York State is unknown.

Suppressing fire in naturally fire-maintained habitats and allowing habitat succession may eliminate habitat for this moth that feeds on grasses. Elimination and fragmentation of habitat by commercial and residential development are additional threats.

Areas where this moth has been found need to be evaluated to avoid additional encroachment or fragmentation by development. At some locations, periodic controlled burns or other measures may be needed to restore or maintain grassland habitat where the moth occurs. Minimizing lighting to maintain dark sky conditions would also be beneficial.

The habitat for this species in New York State seems to be sandy, grassy areas with an abundance of switchgrass (Panicum virgatum). Larvae commonly feed on this grass in wet places such as ditches and streamsides (D. Schweitzer, personal communication).

This moth might be restricted to the coastal plain, as it is in New Jersey. It has been documented from four sites in Suffolk County, on Long Island and a nearby island.

This moth is documented from Kansas, northwestern Connecticut, and Cape Cod south to North Carolina and Texas. It seems uncommon in areas other than the northeastern part of its distribution (Wagner et al. 2008).

Like many other noctuids (owlet moths), this is a small, brown moth. The forewing is patterned with several shades of brown, and the hind wing is mostly white. The wingspan is approximately 32 mm. Larvae are hardy and smooth (Wagner et al. 2008).

Adults fly from mid July to early August. The females lay one brood of eggs each year. Larvae emerge from the eggs and become mature caterpillars in September and early October. The larvae burrow underground during the day, where they are safe from predators. They emerge at night to feed on the developing seeds of switchgrass (Panicum virgatum) (Wagner et al. 2008), usually in wet areas such as ditches and streamsides (D. Schweitzer, personal communication). Larvae spend the winter underground as prepupae, and pupation occurs in a cell underground. Prepupal larvae of some closely related species (and perhaps this species) aestivate underground for three or four months during the summer before emerging as adult moths (Wagner et al. 2008).

Larvae feed on the developing seeds of switchgrass (Panicum virgatum) (Wagner et al. 2008). It is possible that they also use other grasses (D. Schweitzer, personal communication).

The best time to see this species is during its flight season, from mid July to early August.

The time of year you would expect to find Switchgrass Dart present, reproducing, and larvae present and active in New York.

Information for this guide was last updated on: March 6, 2012