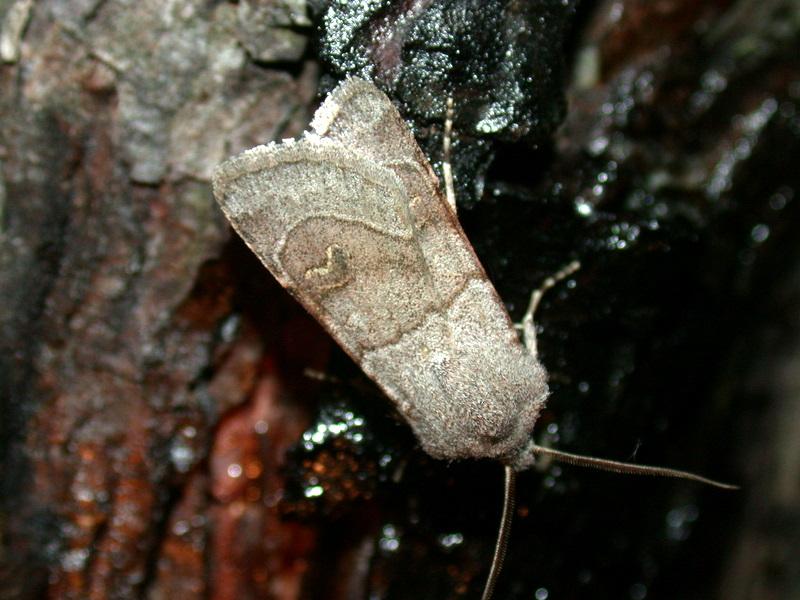 As a defense strategy, caterpillars of many cutworms and darts (species in the subfamily Noctuinae), such as the violet dart, often curl into a "C" and fall to the ground when they are disturbed. Since most species in this subfamily eat a variety of plants, it is usually easy for the caterpillars to find another plant on which to feed afterwards (Wagner et al. 2008).

Six populations of the violet dart have been documented in New York State since 1987. The species occurs in sandy coastal habitats in the East (Covell 1984). In New York State, it is likely restricted to Long Island. Additional surveys are needed to better understand its status and distribution.

The short-term trend for the violet dart seems to be stable. At the two populations surveyed in multiple years, moths were captured in all survey years, indicating the populations are viable and reproducing. The other four documented populations have been surveyed only once.

The long-term trend for the violet dart is unknown. There is a historical record of the moth from Long Island in 1900 (Buckett 1966). However, its distribution and status in historic times compared to the present is unknown.

Elimination and fragmentation of habitat by commercial and residential development are threats to the violet dart. In addition, fire suppression and allowing succession may eliminate some suitable habitat for the species.

At many sites, maintenance of occupied habitat is the only management recommendation. Periodic controlled burns or mechanical management are needed to maintain some of the natural communities in which the Violet Dart occurs. Since the Violet Dart might be impacted by extensive fires, it would be beneficial to leave some areas unburned to serve as refugia. In addition, restricting ATV use and minimizing lighting to maintain dark sky conditions in occupied areas would be beneficial.

The violet dart is documented from Long Island.

The violet dart occurs in coastal habitats from Massachusetts to North Carolina (Covell 1984).

The violet dart is a purplish-gray moth. The forewings are purplish gray with a wide, reddish postmedial stripe. The antemedial and postmedial lines are even, stand out, and have a dark edge. The orbicular spot is pale brown. The reniform spot is a light-colored loop with a grayish-brown center. The hind wings are a light yellowish color with grayish-brown shading toward the outer edges. The wingspan is 35-40 mm (Covell 1984). Larvae are hardy and smooth (Wagner et al. 2008).

The life history of the violet dart is poorly known. The species has one brood each year. Larvae (caterpillars) tunnel underground during the day. Pupation occurs in a chamber underground (Wagner et al. 2008).

The larval foodplants are unknown, but it is thought that the larvae feed on grasses or herbs (NatureServe 2010).

The best time to see the violet dart is during its flight season. In New York State, it has been captured flying from late September until mid-October.

The time of year you would expect to find Violet Dart present and reproducing in New York.

Buckett, J.S. 1966. The little known moth Euxoa sculptilis (Harvey) in Arizona, with descriptions, illustrations, and notes on Euxoa violaris (Grote and Robinson) (Noctuidae-Agrotiinae). Journal of Research on the Lepidoptera 5(4):255-261.