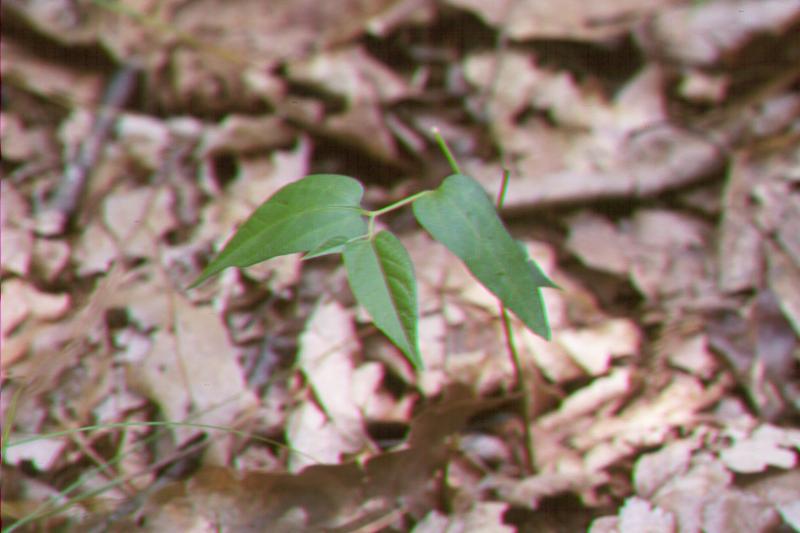 Virginia snakeroot's species and common name comes from its use by Native Americans and pioneers to cure rattlesnake bites. It was also used to treat fevers, toothaches, coughs, and disorders of the stomach and lung. The genus name is Greek for best (aristos) delivery (lochia) for its ancient use in child delivery.

With the exception of a few casual reports, this plant was absent from the New York flora for nearly 100 years. Numerous surveys tried to relocate this plant, but the focus was in areas that resemble its southern habitats. Not until 1994, when this plant was finally rediscoverd in New York, did we begin to understand its New York habitat. Since then, more surveys have been conducted in appropriate habitat and we know of at least six populations. As surveys continue, we expect to find more populations of this plant in the Hudson Highlands and the mid-Hudson Valley.

Since this plant was just rediscovered in New York in 1994, the short-term trends are difficult to assess. Now that the habitat requirements in New York are better understood, more populations are being discovered. These may have been present all along or this plant may be spreading northward. Populations that have been surveyed more than once appear stable.

After going nearly a century without any reports of this plant (absent between 1895-1994), this plant was rediscovered in the Hudson Highlands. Since this rediscovery, a number of new populations have been found. Whether these populations were here all along or if the plants are increasing in this region is unclear. Stanley Smith commented in the 1960s that he thought he saw this plant at a site in Ulster County, New York, but no voucher specimen was collected. All of the historical populations in the New York City and Long Island area are presumed extirpated.

Besides a few plants being nipped by deer, no threats are known within New York.

While this plant has a specific habitat requirement, it requires no active management. Although active forestry is not practiced in areas where this plant is currently known, it should be noted that clear-cutting may be incompatiable with the protection of this plant. Likewise, any development proposed upslope from Aristolochia populations should study potential impacts.

Now that habitat requirements are better understood, habitat modeling could assist with finding new occurrences in the Hudson Highlands.

An often difficult to see plant of well-drained wooded slopes, rocky slopes of oak woods, open woods, moist woods, rich woods, and only rarely in clearings. It particularly seems to favor drainage patterns on southwest to southeast facing slopes in oak-hickory forests or chestnut oak forest. Search areas on the slope where leaves collect as water drains down the slope. These areas may have lots of Carex pennsylvanica surrounding the water sink, but little to no Carex pennsylvanica directly within the drainage where the Aristolochia may be concentrated (New York Natural Heritage Program 2004). Mesic forest (FNA 1997). Moist or dry upland woods (Gleason & Cronquist 1991). Rich, often calcareous soils, woodlands and floodplains (Mitchell and Beal 1979). Rich, often calcareous woods (Fernald 1970).

This plant is currently only known from a few locations on the west side of the Hudson River in the Hudson Highlands where is appears on well-drained rocky wooded slopes dominated by various deciduous hardwood species and Carex pensylvanica. Southeastern New York is at this species' northern range limit.

This plants is found throughout much of the eastern United States ranging from Connecticut, southern New York, southern Michigan, and Iowa, south to Texas and Florida.

This plant has lance to arrow-shaped leaves 6-12 cm long that are arranged alternately on a stem that can grow to 60 cm long. The stem may be erect if short or lying on the ground if long. The flowers will usually be hidden under the leaf litter, one at the end of each branch. They are inch-long, purple, S-shaped flower tubes that flare-out at the tip.

The stems of this plant are slender and erect to decumbent. The leaves highly variable but generally ovate to oblong, acuminate, and truncate to cordate at the base. The flowers appear solitary on slender, scaly peduncles from the lowest nodes. These are often buried below the leaf litter. The calyx is deep purple to chocolate in color and strongly curved.

Fortunately, one can easily identify this plant based on leaves alone. Since the flower is often hidden under the leaf litter, it is infrequently observed.

A very unique plant, even vegetatively, that is not easily confused with any plant in our region.

The plant flowers from mid-May to late July and the fruits persist until late October. Since this plant will often appear in areas surrounded by Carex pennsylvanica, surveys may be most effective after the Carex begins to senesce. The ideal survey time is from July to September.

The time of year you would expect to find Virginia Snakeroot vegetative, flowering, and fruiting in New York.

Together the segregate genera Endodeca and Isotrema form a very well supported clade that is morphologically, molecularly, and cytologically distinct from the rest of Aristolochia sensu lato (Kelly and González 2003, Neinhuis et al. 2005, Ohi-Toma et al. 2006, Wanke et al. 2006). These authors work strongly supports Hubers (1993) taxonomic alignment which recognizes Endodeca and Isotrema as distinct genera. Ohi-Toma et al. (2006), while supporting the recognition of segregate genera within Aristolochia s.l., chose to lump Endodeca under Isotrema because the two share the same chromosome number but their work also strongly supports the recognition of the two as distinct at the generic level with the choice somewhat subjective. We currently recognize Endodeca (E. serpentaria) and Isotrema (I. macrophyllum, I tomentosum) as distinct from Aristolochia (A. clematitis) following (Huber 1993, Kelly and González 2003, Neinhuis et al. 2005). A few taxa (all occurring south of New York) have been described within Endodeca serpentaria (e.g. Aristolochia hastata, A. convolvulacea) sometimes at the infraspecific level. We follow recent authors (Gleason and Cronquist 1991, Berringer 1997) in recognizing only one variable taxon.

Information for this guide was last updated on: September 7, 2004