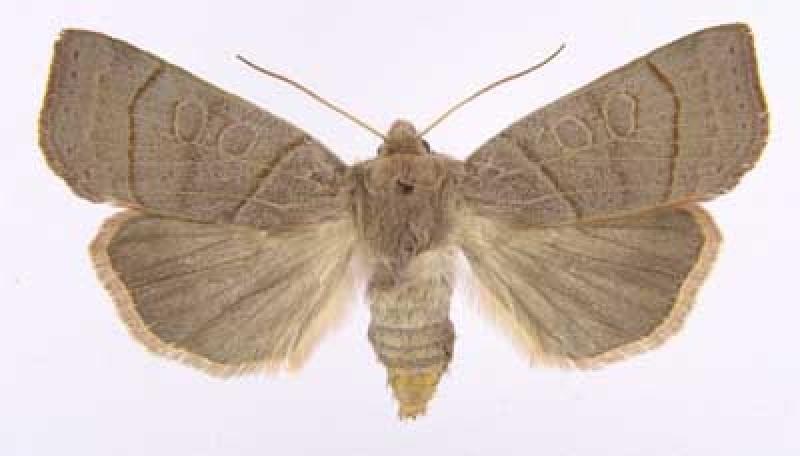 This species may require high quality pine barrens habitat and while prescribed burning is beneficial, extensive burning of the habitat during inappropriate seasons may be detrimental to the larvae, eggs, or adults.

This species population likely increased in the Dwarf Pine Barrens on Long Island after the wildfires of the 1990s, but this has not been confirmed. An additional location was found on Long Island in 2007. A single moth was found in 2014 in the Albany Pine Bush indicating continued presence in the area.

Long term trends indicate a decline in the population of 25% to 75%, primarily due to the loss of pine barrens habitat.

The main threat is loss of habitat. It is unknown how this species is faring with recent active fire management. Occasional partial burning should benefit this species, but a population could be eradicated if the entire habitat were to burn between October and mid-June.

This species seems to usually require high quality barrens in some, but not all, parts of the range. It is vulnerable to fire from October to June. Most beneficial fires should occur from July to mid-September when prepupae and pupae are in the soil. The entire occupied habitat should not be burned during fire management practices. Periodic controlled burns or mechanical management are needed to maintain the natural community for this species. The best management strategy is to manage the natural community, or habitat, where this species occurs. Maintaining pine barrens with their full suite of plant and animal species requires frequent (every five to 10 years) disturbance to maintain open-canopy, shrub-dominated communities and to prevent succession to a closed-canopy hardwood forest (Jordan et al. 2003). Researchers have determined that "an active fire management program utilizing prescribed fire with appropriate mechanical treatments" is the preferred method (Jordan et al. 2003). Researchers have also determined that the size, type, intensity, and timing of fires (pyrodiversity) needs to be evaluated for each site to maximize benefits to the natural community and the species it supports (Jordan et al. 2003). The entire occupied habitat for a population should not be burned in a single year. For example, in places where prescribed burning is used, refugia (unburned areas) are needed for many species to ensure that any life stage can survive a fire.

The response of this species to management practices at the Albany Pine Bush is an important research need. Additional studies on population size and trends are also needed.

In New York, this species is found in pitch-pine scrub oak barrens on sand and maritime dunes and maritime grasslands. In adjacent states, and in much of the range, most habitats are in some type of pine or oak barren, but some populations are found on rock rather than sand. In western Pennsylvania, Ohio, and one New Hampshire location, other habitats besides pine barrens or oak scrub are also used.

In New York, this species has been collected at the Albany Pine Bush and Long Island since 1980. There is also a specimen at North Carolina State University that was collected from Poughkeepsie in the 1960s.

Chaetaglaea cerata has a very localized, disjunct distribution from Aweme Manitoba through Wisconsin and southern Ontario to southern Maine, south to central Pennsylvania, central Ohio, northern West Virginia, southeast Connecticut and Long Island, New York. There have been a few recent collections in the Ottawa area as reported by Handfield (1999), and one verified by Dale Schweitzer, but none yet in Quebec.

A remarkably non-variable moth easily identified from a specimen by anyone familiar with the Noctuidae family of moths. Separation from the common and variable moth, Chaetaglaea sericea, might be difficult or impossible from a field photo taken under artificial light at night. All accepted records for new sites should be based on collected specimens.

See illustrations such as Rings et al. (1992), Handfield (1999), or the key in Frobes (1954).  The forewing is distinctive. Note the grayish ground color, the slightly reddish (rust color) lines, the median line crossing the reniform (a particular spot on the wing), the rounded reniform and orbicular spots which are well defined with paler outlines and of similar size, and the lack of any small black dot in the former. The wing veins are not partially pale. There is almost no variation in color and very minimal variation in markings.  Compare to Chaetaglaea sericea, which usually is immediately separable by the dot in the reniform, but is sometimes about the same color. The larva has not been described or illustrated, but is more prominently striped than related species.

The forewing is distinctive. Note the grayish ground color, the slightly reddish (rust color) lines, the median line crossing the reniform (a particular spot on the wing), the rounded reniform and orbicular spots which are well defined with paler outlines and of similar size, and the lack of any small black dot in the former.

Unlike almost all cool season Noctuidae, this one very seldom comes to baits. It is usually collected at blacklights or mercury vapor lights within a couple hours after sunset. This species was very largely overlooked before the introduction of blacklights.

The adults may not feed much, other than sipping water, but this is not known. Larvae feed on spring growth, apparently on scrub oak, other small oaks, and blueberry. The larvae seem to prefer species of cherry if present.

The adults occur in October, with some likely present by the end of September and persisting into November on Long Island. The eggs overwinter and hatch shortly after the oaks leaf out in late April or early May. The larval stage is probably about five or six weeks in the wild, but will vary with temperature. The larvae must mature while still soft foliage is available and likely mature by approximately 10 June.

The time of year you would expect to find Waxed Sallow reproducing, larvae present and active, eggs present outside adult, and pupae or prepupae present in New York.