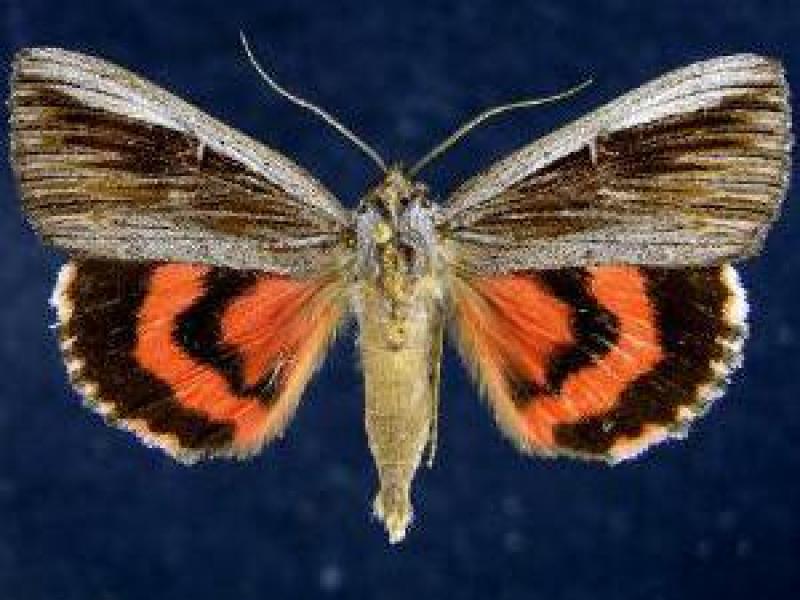 When the moth is at rest under a bush, it appears as a clump of dead pine needles on white sand.

This species is probably still somewhat widespread on Long Island, but it is unknown how many populations remain. At least one globally significant occurrence remains on Long Island. There are possibly 5 to 20 populations in the state, but only two or three of these have been recently documented. It is possible that additional occurrences could be found in southern New York.

It appears that the New York population is currently stable, but additional field surveys are needed.

The population has undergone significant declines with the loss of suitable habitat, especially on Long Island.

The threats are difficult to assess since some habitats are more management dependent than others. This species should do well with any reasonable fire management program as long as all of the habitat is not burned at once. However, wildfires that could consume the entire occupied habitat are a threat, especially on ridegtops and in small isolated habitats. Spongy Moth (Lymantria dispar) spraying could be a threat, as would be with other chemical biocides and potentially would be with Bt (Bacillus thuringiensis - a bacterial biological control used on gypsy moth caterpillars). The closely related Scarlet Underwing (Catocala coccinata) is very sensitive to Bt, but many Catocala spp. are not (Peacock et al. 1998). However, unusually early defoliation, before about June 10, of scrub oaks on hilltops and ridges could itself annihilate a population (Schweitzer 2004).

The best management strategy for this species is the management of the natural community, or habitat, where this species occurs. Maintaining the Long Island pine barrens with their full suite of plant and animal species requires frequent (every few decades) disturbance to maintain the pitch pine-oak forest and to prevent succession to a closed-canopy hardwood forest (Jordan et al. 2003). Researchers have determined that "an active fire management program utilizing prescribed fire with appropriate mechanical treatments" is the preferred method (Jordan et al. 2003). Researchers have also determined that the size, type, intensity, and timing of fires (pyrodiversity) needs to be evaluated for each site to maximize benefits to the natural community and the species it supports (Jordan et al. 2003). The pitch pine-oak forest community, where this moth occurs, requires moderate intensity fires. The entire occupied habitat for a population should not be burned in a single year. For example, in places where prescribed burning is used, refugia (unburned areas) are needed for many species to ensure that any life stage can survive a fire. This species does not survive fire well (Schweitzer et al. 2018).

Habitats supporting this species should be protected from Spongy Moth spraying. However, if severe defoliation is likely before about June 10, then starvation is also a risk and it might be prudent to use Bt to reduce defoliation on a portion of the habitat. Starvation of the entire brood is possible if all of the scrub oak foliage is consumed during May. Such early defoliation is not common and is unlikely to occur widely on coastal barrens, but it can occur on outcrops and ridgetops. It is unlikely Bt would kill all of the larvae, but it seems likely it would kill a majority of them.

Research is needed on how sensitive larvae are to Bt and exactly when most of the larvae finish feeding. Catocala spp. Bt sensitivity varies. In addition, the risks of starvation compared to Bt applications during severe Spongy Moth outbreaks needs to be evaluated.

This species is almost exclusively found in pitch pine-scrub oak communities, usually on sand, but sometimes on acidic rocks in the lower Hudson Valley.

This underwing was at least formerly widespread on Long Island and probably still occurs in most extensive pitch pine-scrub oak communities in Suffolk County. This species has been documented in Orange County, although it probably does not occur on many sites on the mainland.

This moth is found mostly in four main areas: the Cape Cod region and adjacent islands of Massachusetts, the Long Island, New York pine barrens, the core of the New Jersey Pine Barrens in Ocean, Burlington, and extreme northern Atlantic Counties (one specimen from Cape May County), and in the mountains from eastern West Virginia to far western North Carolina. Isolated populations are known on two ridgetops in Berkshire County, Massachusetts (both 1998, D. Wagner, T. McCabe) and at least one such ridgetop in the lower Hudson Valley, New York (NatureServe 2022). The extent and continuity of the Appalachian range is unknown. There is a gap in the range across Pennsylvania, but the species could turn up in the shale barrens areas of southcentral Pennsylvania and adjacent Maryland.

This species has a wingspan of 5.6-6.5 cm. It is characterized by its orange hindwings which include red and black bands and white fringe. The forewing is gray in color with a pattern similar to a brown and black wood grain. C. herodias gerhardi have a white border around their forewing which is not present in C. herodias herodias (Covell 1984).

The forewing pattern is unique and the reddish hindwing is similar to only a few species of moths. On the forewing, note the poorly developed normal lines, strongly contrasting whitish costa (leading edge), and the dark and whitish linear striations on the outer portion of the wing.

The adult is best for identification.

The adults rest near the base of scrub oak (Quercus ilicifolia) or other bushes or on the sand underneath these bushes. A Catocala spp. flushed off the ground in a barrens community will almost always be this species.

The larvae feed almost exclusively on spring growth of scrub oak in the wild, except that blackjack oak (Quercus marilandica) might also be used on Long Island.

This is one of the earlier flying Catocala species. The adults occur primarily from mid-July into August, probably about the same time in all parts of the New York range, and it is likely that a few adults persist into the second half of August in most years. Catocala have notably long pupal periods, often about as long as the larval period, and pupae are present into July. This species is nocturnal. It is believed to rest on the ground under oak bushes and trialing pine branches (Schweitzer et al. 2018 and NatureServe 2022).

The time of year you would expect to find Herodias or Pine Barrens Underwing reproducing, larvae present and active, eggs present outside adult, and pupae or prepupae present in New York.