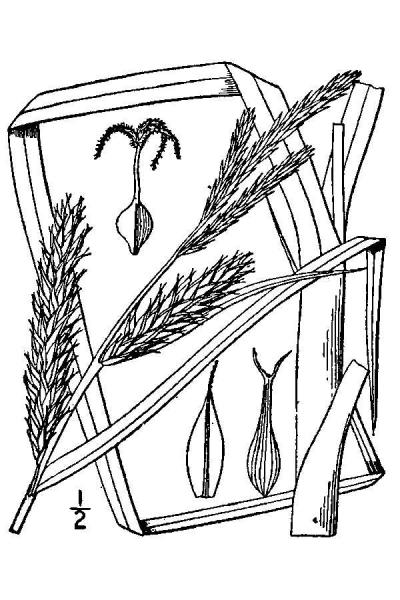 The specific epithet atherodes means like an ear of wheat (Fernald 1970). This is probably in reference to the cylindrical fruit clusters which apparently reminded the author of wheat.

There are now over 21 known populations with more being found in Jefferson, St. Lawrence, and Oswego Counties. There are 10 good or excellent occurrences. The speculation is this plant is more common than our current information indicates. More survey work is planned for the St. Lawrence River Valley and eastern Lake Ontario region. As a wetland sedge, this plant may be threatened by certain invasive species, manipulations to the hydrology, and changes in water quality.

Many new populations of Carex atherodes have been found in the western parts of northern New York in the past 20 years. Some of these populations occur in cultural habitats such as human created ponds and successional fields. It is likely that some of these populations were overlooked in the past but it also seems plausible that this species is expanding and increasing its populations into these cultural habitats. Therefore, short term trends are not clear but may indicate that C. atherodes is increasing at least in northern New York.

At least one population is believed to be extirpated. A couple other populations only known from historical records have been searched without successfully finding the populations. It is unknown if these populations are still extant. Many new populations have been found in recent years. Some of these were probably overlooked in the past but some may truly be new. Long term trends probably indicate an overall increase but perhaps only in northern New York.

Potential threats to C. atherodes populations include mowing, invasive species, shading by woody vegetation, and nutrient run off from agricultural fields. It is unknown how much of a threat these will have on populations of C. atherodes.

Carex atherodes is most abundant in western northern New York. It also occurs in northern central New York and has a few scattered occurrences in eastern and western New York.

Carex atherodes occurs in North America and Eurasia. In North America, it occurs from Alaska east to Quebec south to Maine, Vermont, Virginia, West Virginia, Ohio, Indiana, Illinois, Missouri, Nebraska, New Mexico, Arizona, and California. It is a very common and significant wetland species in portions of the Midwest and West. It is uncommon and local in eastern North America (Reznicek and Catling 2002).

Carex atherodes is loosely cespitose and long rhizomatous. It often forms dense monospecific patches. It has true vegetative culms with nodes and internodes as well as reproductive culms. Vegetative culms are hollow or spongy toward the base. The lower leaves are composed of sheaths only which are reddish purple. Leaf sheaths are pubescent or scabrous and the summit of the leaf sheath fronts (adaxial surfaces) are pale brown to dull reddish purple.The leaf blades are 3-10 mm wide, finely papillose abaxially, and are usually pubescent at least towards the base of the blades on the abaxial surfaces of the proximal leaves. Glabrous forms are more common to the west of New York. Ligules are (6-)11-45 mm long and are longer than wide. Vegetative culms are conspicuous because they are taller than the reproductive culms and the leaves are clustered towards the apex. Reproductive culms are less frequent and sometimes absent. The distal (1-)2-6 spikes are staminate while the 2-5 proximal spikes are pistillate or slightly androgynous. Spikes are erect and sessile to short pedunculate. Perigynia are (6.5-)7-12 mm long, glabrous, long beaked, and have two teeth (1.2-)1.5-3.0 mm long that are spreading to outcurved.

Immature perigynia are produced in early July. These mature and persist till early August although towards the end of this season they are shedding easily. Although identification will often need to be done based on vegetative material, perigynia are useful in making identification more certain. Therefore, the best time to survey for C. atherodes is in July.

The time of year you would expect to find Wheat Sedge vegetative and fruiting in New York.

Carex atherodes is currently placed in section Carex which contains species with true vegetative culms and perigynia with long beaks and long beak teeth. Rare hybrids with C. trichocarpa are known (Reznicek and Catling 2002). It has been placed in section Paludosae by Mackenzie (1931-1935), Fernald (1970), and Gleason and Cronquist (1991).