State Conservation Status Rank
S3
Vulnerable in New York - Vulnerable to disappearing from New York due to rarity or other factors (but not currently imperiled); typically 21 to 80 populations or locations in New York, few individuals, restricted range, few remaining acres (or miles of stream), and/or recent and widespread declines.
Global Conservation Status Rank
G4?
Apparently Secure globally (most likely) - Conservation status is uncertain, but most likely uncommon in the world but not rare; usually widespread, but may be rare in some parts of its range; possibly some cause for long-term concern due to declines or other factors. More information is needed to assign a firm conservation status.

Plants of inland lake shores must be adapted to fluctuating hydrologic conditions, ranging from complete inundation to complete exposure. One species found on inland lake shores, lake-cress (Neobeckia aquatica), is rare throughout much of its range. One mode of vegetative reproduction it employs, fragmentation, depends on fluctuating water levels. Flooding breaks pieces of foliage off the plant and transports it. When the water levels recede, the fragments settle on exposed saturated substrate, which supports their development into a separate plant.

There are several hundred to one thousand occurrences statewide. A few documented occurrences have good viability and several are protected on public land or private conservation land. This community is limited to lake shores that remain wet in the state, and there are several high quality examples. The current trend of this community is probably stable for occurrences on public land, or declining slightly elsewhere due to moderate threats that include alteration to hydrology, shoreline development, and invasive species.

The number and acreage of inland calcareous lake shores in New York have probably declined slightly in recent decades as a result of shoreline development, hydrologic alteration, gravel mining, and invasive species.

The number and acreage of inland calcareous lake shores in New York have probably declined moderately from historical numbers likely correlated to the alteration of natural hydrology from impoundments, shoreline hardening, and gravel mining.

Where practical, establish and maintain a natural wetland buffer to reduce storm-water, pollution, and nutrient run-off, while simultaneously capturing sediments before they reach the lake shore. Buffer width should take into account the erodibility of the surrounding soils, slope steepness, and current land use. Wetlands protected under Article 24 are known as New York State "regulated" wetlands. The regulated area includes the wetlands themselves, as well as a protective buffer or "adjacent area" extending 100 feet landward of the wetland boundary (NYS DEC 1995). If possible, minimize the number and size of impervious surfaces in the surrounding landscape. Avoid habitat alteration within the lake shore and surrounding landscape. For example, roads and trails should be routed around lake shores, and ideally not pass through the buffer area. If the lake shore must be crossed, then bridges and boardwalks are preferred over filling. Restore sites that have been unnaturally disturbed (e.g., remove obsolete impoundments and ditches in order to restore the natural hydrology). Prevent the spread of invasive exotic species into the lake shore through appropriate direct management, and by minimizing potential dispersal corridors, such as roads.

Where practical, establish and maintain a natural lake shore buffer to filter storm-water, pollution, and nutrient run-off from surrounding uplands and to capture sediments before they reach the lake shore. Avoid habitat alteration along the shoreline and in surrounding landscape. Minimize potential dispersal corridors for exotic species, such as roads and bridges. Maintain or restore the natural flood and ice scour regime.

Survey for occurrences statewide to advance documentation and classification of inland calcareous lake shores. Continue searching for large sites in good condition (A- to AB-ranked).

This community is widespread throughout upstate New York north of the North Atlantic Coast Ecoregion. It is probably represented by different ecoregional variants. Occurrences are known from the Allegheny Plateau, Adirondacks, Lake Ontario and Lake Champlain Lowlands. Other occurrences are reported from the Taconic Highlands. It is probably concentrated in the Great Lakes Ecoregion.

This physically broadly-defined community may occur worldwide. Examples with the greatest biotic affinities to New York occurrences are suspected to span north to southern Canada, west to Minnesota, southwest to Indiana and Tennessee, southeast to North Carolina and northeast to Nova Scotia

Inland calcareous shoreline communities occur on the perimeters of calcareous lakes, and have gravel, sand, or mud soils. The water levels fluctuate seasonally, with periods of flooding and periods of saturation and exposed substrate. The vegetation, which may be sparse, is composed primarily of herbaceous species that are adapted to calcium-rich environments. Characteristic species include spikerushes (Eleocharis acicularis, S. palustris), bulrushes (Schoenoplectus acutus, S. tabernaemontani), and water-crowfoot (Ranunculus flammula).

A gravel, sand, or mud shoreline around an inland pond or lake with calcareous water and seasonally fluctuating water levels. The vegetation may be sparse and is typically dominated by herbaceous species.

Known examples of this community have been found at elevations between 90 feet and 476 feet.

During late summer, when water levels are at their lowest, the greatest diversity of herbaceous plants can be observed. The exposed substrate along the water's edge can feature a large variety of sedges, rushes, and forbs. 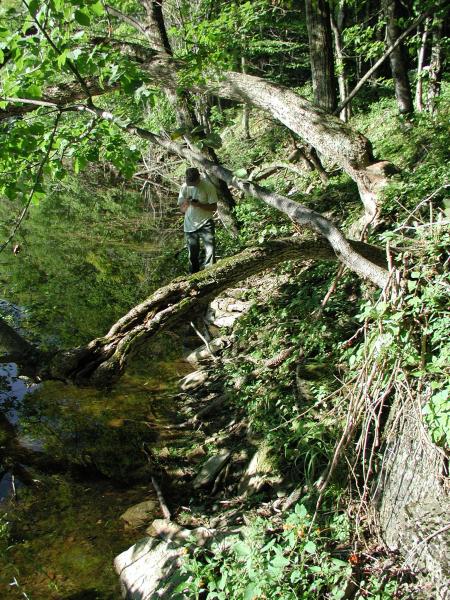 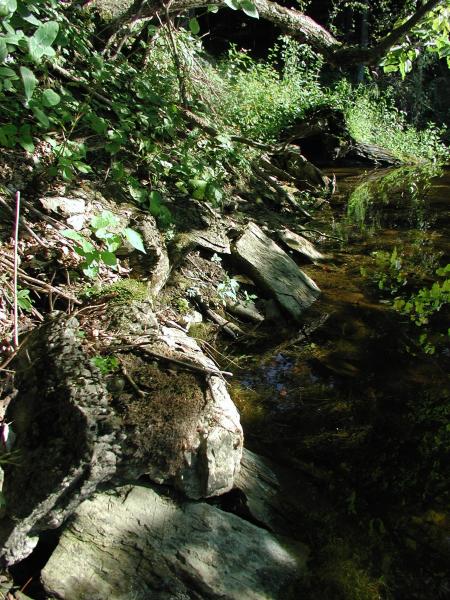 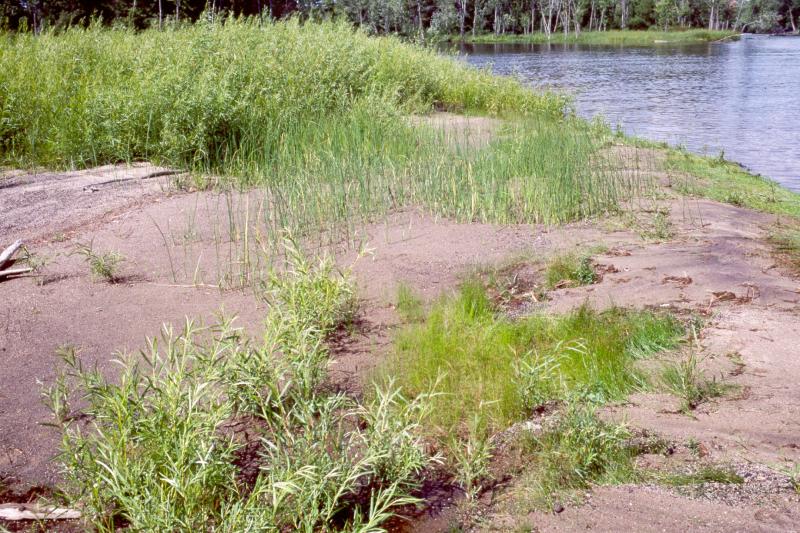 This figure helps visualize the structure and "look" or "feel" of a typical Inland Calcareous Lake Shore. Each bar represents the amount of "coverage" for all the species growing at that height. Because layers overlap (shrubs may grow under trees, for example), the shaded regions can add up to more than 100%.

Information for this guide was last updated on: April 17, 2019