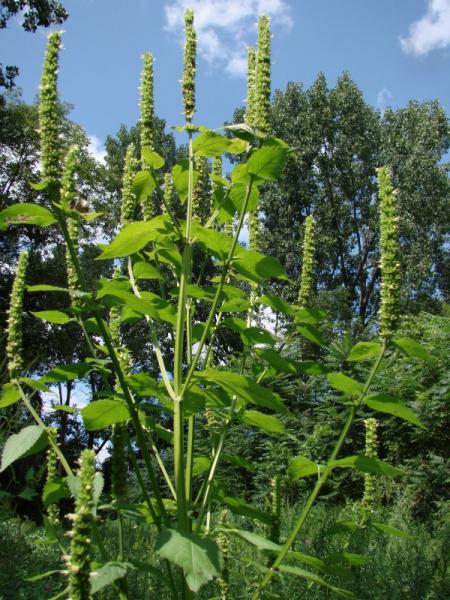 Even though this is not the true hyssop (Hyssopus officinalis) it does look similar to it but lacks the minty fragrance. The genus name is derived from its many flower spikes and the species name refers to its similarity to the catnip genus Nepeta (Fernald 1950). It is available in the horticulture trade and is used in perennial gardens, especially to attract bees and butterflies.

There are 12 existing populations but most of them are of poor quality in areas threatened by invasive species or human disturbance. There are about 10 historical occurrences which need further survey work.

The present populations seem to be declining because of competition by invasive species and human disturbance.

There were many historical records from Long Island and western New York which have not been found or are considered extirpated. Habitat development and invasive species in naturally disturbed areas have probably reduced the species over the last 100 years.

Succession is the most serious threat to this species, especially in naturally disturbed areas and by invasive species. Habitat destruction and destruction of plants by herbicides and improper mowing are also threats which have reduced occurrences around metropolitan areas.

The preferred habitat management techniques are not known for this species. Is not known why it prefers certain disturbed areas over others. However, preventing succession by woody plants and controlling invasive species should help preserve the population.

The habitat preference of the species needs to be studied because it occurs in a wide variety of disturbed habitats and we do not know the exact environmental factors it prefers.

In New York this species has been found in a diversity of habitats, including weedy or early-successional areas such as roadsides, railroads, and thickets. Many of the known sites for Yellow Giant-hyssop are on limestone-derived soils, and support plant species associated with rich sites. The list of associated plants at these sites includes many calciphiles as well as common weeds of rich woods (New York Natural Heritage Program 2007). Upland in more or less open deciduous woods (oak, beech-maple); also meadows, fencerows, thickets, and lowland woods (Voss 1996). Open woods (Gleason and Cronquist 1991). Rich thickets and borders of woods (Fernald 1970).

This herb species has been found throughout much of southern, western, and central New York on sites with rich soil. A particularly high number of collections have been reported within close proximity to New York City, Buffalo/Niagara Falls, or Ithaca.

This species ranges from southern Quebec and Vermont west as far as southern Ontario and South Dakota, and south from Georgia and Alabama to Oklahoma.

Yellow Giant-hyssop is a tall (up to 2 meters) herb with a smooth, square stem with winged angles and coarsely toothed, ovate leaves. The leaves are pubescent underneath. The pale, greenish yellow flowers occur in cylindrical spikes up to eight inches long at the end of the stem. These spikes, dense with flowers, are held upright like ears of corn; the genus name is derived from "stachys", meaning an ear or corn or wheat. The individual flowers are about .75 cm long, and have five-lobes, with the stamens protruding past the ends of the petals.

This plant is best sought when in flower, though it may also be identified from stems with mature or senescing fruits.

Yellow Giant-hyssop flowers from late July to early September and the fruits may persist through the first few frosts and even be visible into the next spring if the winter is not severe.

The time of year you would expect to find Yellow Giant Hyssop vegetative, flowering, and fruiting in New York. 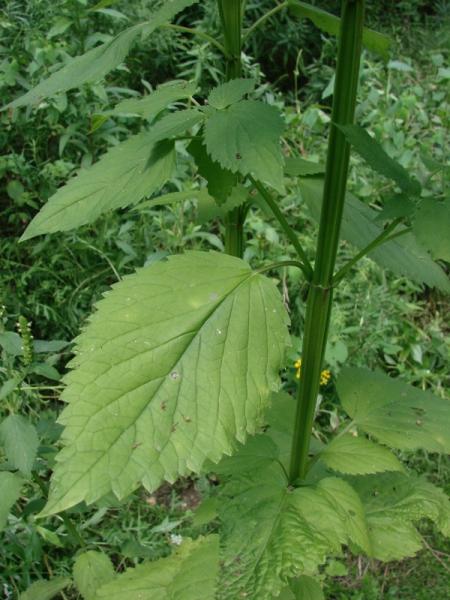 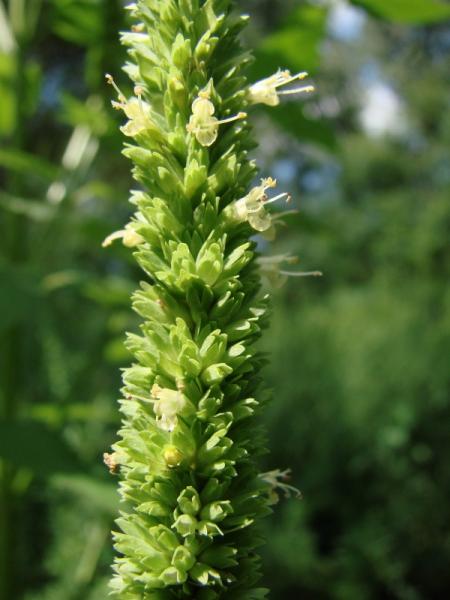 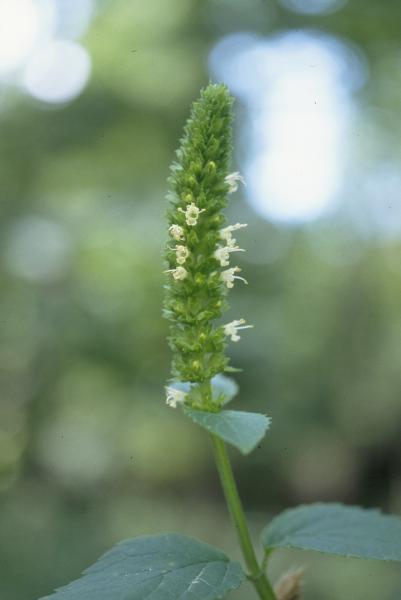 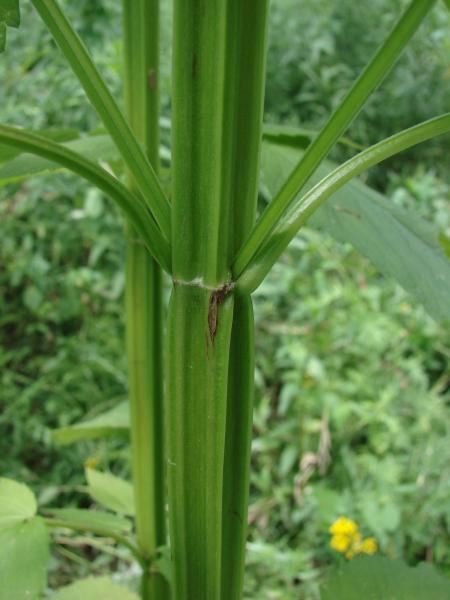 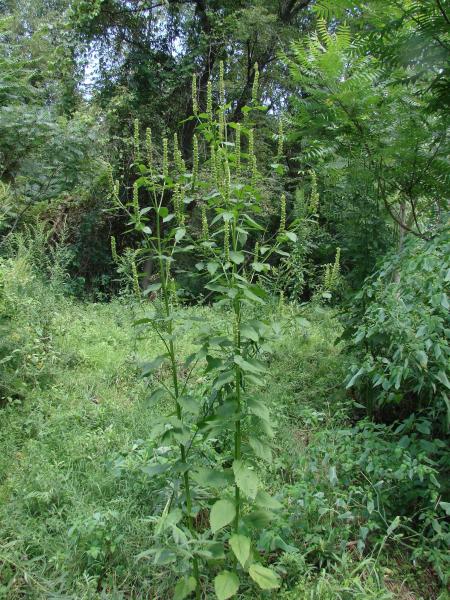 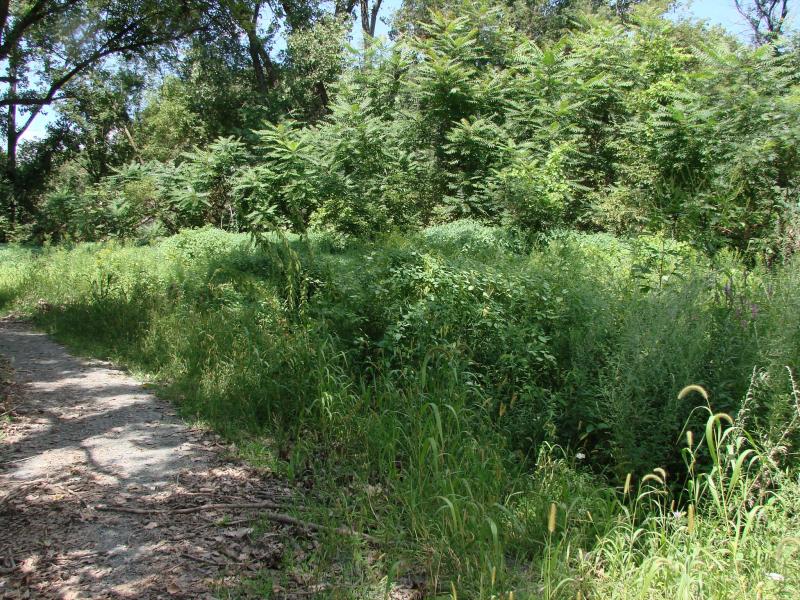 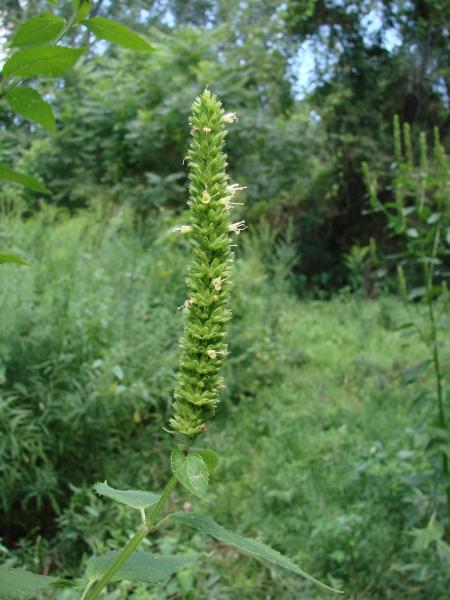