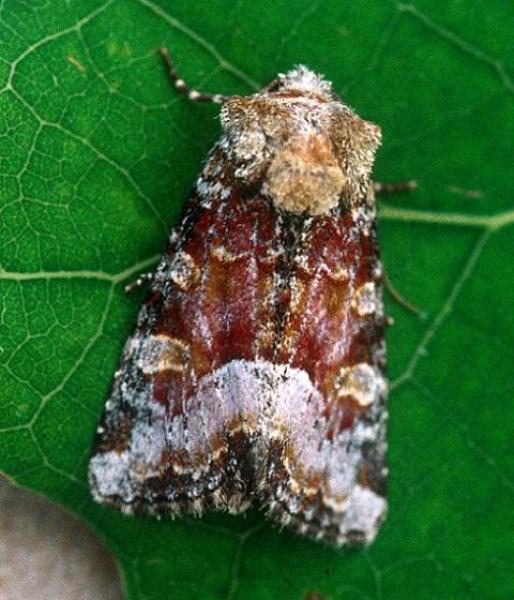 This moth is named after Eliza Bridgham who studied and collected moths in Rhode Island. She was also the mother of entomologist and artist Joseph Bridgham. In addition, its patterning and coloration which liken it to decorative "brocade" woven fabrics.

There are two known occurrences of Oligia bridghami in New York (in Clinton and Suffolk counties). Further inventory is needed to determine the New York distribution, trends, habitat requirements, and threats to the species in order to determine an appropriate rank. Covell (1984) called this moth uncommon, but its food plant is not known and its biology is poorly understood.

Bridgham's Brocade moth has been documented in two disjunct locations in New York since 2003. Since sightings of this species are fairly recent in the state, short-term trends are unclear.

Information on Oligia bridghami occurrences in New York prior to 2003 are lacking; therefore, long-term trends are unknown.

Known threats to maritime grasslands include habitat loss due to development and fire suppression, although the threat of development for the remaining habitat on Long Island may be low. The suppression of fires in barrens and other fire-dependent habitats could cause a degradation of habitat for this species and therefore a drop in population size. Conversely, a fire affecting an entire occurrence could eliminate all life stages that are present (Schweitzer et al. 2011).

Bridgham's Brocade moths are attracted to artificial lighting. Artificial lighting can: increase predation risk, disrupt behaviors such as feeding, flight, and reproduction, and interfere with dispersal between habitat patches. In addition, many individuals die near the light source. It is not known if the impact of artificial lighting is severe, but the impact is likely greater for small, isolated populations (Schweitzer et al. 2011).

Please refer to the NYNHP community conservation guides for maritime grassland and sandstone pavement barrens for specific information on threats and management considerations for these habitat types where Oligia brighami is known to reside in New York.

Historically, fire has played a role in maintaining maritime grasslands. The entire occupied habitat for a population should not be burned in a single year. For example, in places where prescribed burning is used, refugia (unburned areas) are needed for many species to ensure that any life stage can survive a fire. Schweitzer et al. (2011) suggests waiting five years before burning a unit again to give the lepidopteran population a chance to recolonize and increase local populations to withstand another fire. It may also be beneficial to know the locations of rare lepidopterans since there's a chance of losing localized populations if there are no individuals at the area set aside as refugia (Schweitzer et al. 2011).

Insecticide use should be avoided when possible if rare species are present. When insecticide use cannot be avoided, careful planning along with consistent rare species monitoring, can result in successful eradication of the target species without eliminating rare species. A biocontrol alternative is Bacillus thuringiensis (Btk) for some target species, such as spongy moth. However, sensitivity to Btk varies among native species and this option should be fully researched for treatment timing and regimes and weighed with other options to have the least impact on native lepidopteran populations (Schweitzer et al. 2011).

Please refer to the NYNHP community conservation guides for maritime grassland and sandstone pavement barrens for specific information on threats and management considerations for these habitat types where Oligia brighami is known to reside in New York.

Further inventory is needed to define the distribution, population size, and conservation status of Bridgham's Brocade moth in New York. In addition, research is required to understand the habitat requirements and larval foodplants for this species.

In New York, Bridgham's Brocade moths have been found at the edges of sea level fen and martitime heathland, dunes, and grassland on Long Island. They have also been documented in a sandstone pavement barrens natural community in Clinton county dominated by jack pine and containing shrubs, mosses, lichens, and ferns (New York Natural Heritage Program 2011). Larval foodplant requirements are currently unknown; however, the larvae are believed to be generalists or feed on widely distributed plants (NatureServe 2012).

Oligia bridghami is known from Clinton and Suffolk counties in New York (New York Natural Heritage Program, 2011). With our current knowledge of the species, it appears to have a disjunct population in New York.

Oligia bridghami is in the family Noctuidae and has a wingspan ranging from 2.8 to 3.1 cm. The forewing is dark, reddish or rusty brown with pale- or violet-gray basal and subterminal areas. Antemedial and postmedial lines and spots are whitish. The hindwing is white or gray with brownish coloration between the median line and the outer margin (Covell, 1984, Beadle and Seabrooke 2012).

Coloration and patterning on forewings of adults.

The larval foodplants are unknown.

In northern New York, this species has been observed in late July (New York Natural Heritage Program, 2011). However, it has been noted as being active in July and August in the literature (Covell, 1984).

The time of year you would expect to find Bridgham's Brocade present and reproducing in New York.

Information for this guide was last updated on: July 30, 2019