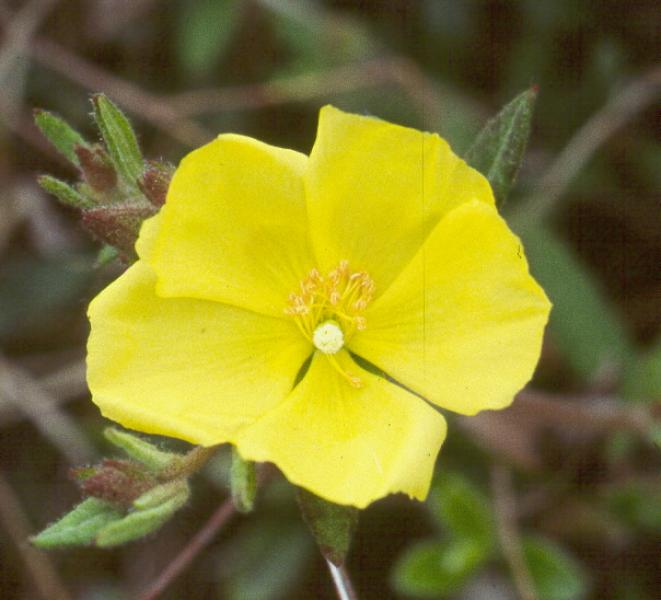 Robert Zaremba, botanist from Cape Cod, calls bushy rockrose the signature species of the maritime grasslands since its beautiful yellow flowers are always present in large healthy examples of this community. The genus name is derived from the Greek for sunflower and refers to the yellow flowers that open only once, when the sun is shining, before the petals fall off. The species name means bushy.

There are 12 existing populations, but only 2 of them are large and extensive. The remainder occur in fairly small patches. There are nine historical occurrences, but 6 of them are considered extirpated.

Populations fluctuate, sometimes substantially, from year to year, but overall they seem stable as counts are done on most populations every year. One population from 1984 was subsequently destroyed by development. Three populations need recent counts.

The biggest threat to this species is succession of its maritime grassland habitat to woody species, although a seed bank can maintain the population for some time until disturbance returns. Some populations also occur along trails or roads where the open habitat is maintained, but the plants are still threatened by direct disturbance such as trampling, improper mowing, or bicycle use.

Some taxonomic work has been done on this species but results are inconclusive. More research is needed on how the characters of this plant change throughout the season.

In New York State, Crocanthemum dumosum is known from a number of diverse habitats on Long Island, with dry sandy soils being the common factor. It has been found growing in maritime heathlands, shrublands and grasslands, in Hempstead Plains grasslands, in oak woodlands and openings within oak hickory, oak-pine, and oak-maple forests, and in disturbed areas within lawns, golf courses, and pipelines (New York Natural Heritage Program 2010). Dry, sandy soil and barrens (Gleason and Cronquist 1991). Open, dry, sandy slopes with less than 25% herb cover; plants seem to be intolerant of shade and moisture (Coddington 1978). Dry sands, barrens and open woods (Fernald 1970).

This is currently only known from Nassau and Suffolk counties on Long Island.

This small herb is known from southeastern Massachusetts (all but one are on Cape Cod and the surrounding Islands), southeastern Rhode Island and Block Island, southeastern Connecticut, and Long Island.

Bush Rockrose is a low-growing (up to 30 cm) perennial herb species with widely spreading branches. The leaves are alternate, 2 to 3 cm long, and densely hairy on their upper sides. It first bears open, solitary flowers with yellow petals 8 to 15 mm long, and later closed, cleistogamous flowers borne in the axils or tips of leafty branchlets. The fruit are capsules; those of open flowers are 4 to 7mm long with 16 to 50 seeds, and those of the cleistogamous flowers 3 to 4.5 mm long with 8 to 14 seeds.

Plants with leaves and either flowers or capsules are best for identification.

There are four different Crocanthemum species in New York and these are often confused with one another. Crocanthemum bicknellii is very tall relative to other Crocanthemum species and the stems are densely covered with white hairs. Crocanthemum propinquum is clearly clonal and the stems have few branches and are moderately covered with white hairs. Both Crocanthemum bicknellii and C. propinquum have inflorescences of 2 to 10 or more petaliferous flowers, and the capsules of their cleistogamous flowers have 1-2 (3) seeds. Crocanthemum canadense is the species most difficult to distinguish from C. dumosum. It has strongly ascending branches and branchlets at maturity, compared to the widely divergent to almost horizontal branching of C. dumosum (which often looks stomped on), tends to bloom later, and the seeds of its cleistogamous flowers are on average smaller (2-3 mm) and fewer (5-10 per flower).

Crocanthemum dumosum flowers from mid-May into late June. Fruits may persist through mid-October.

The time of year you would expect to find Bushy Rock Rose flowering and fruiting in New York. 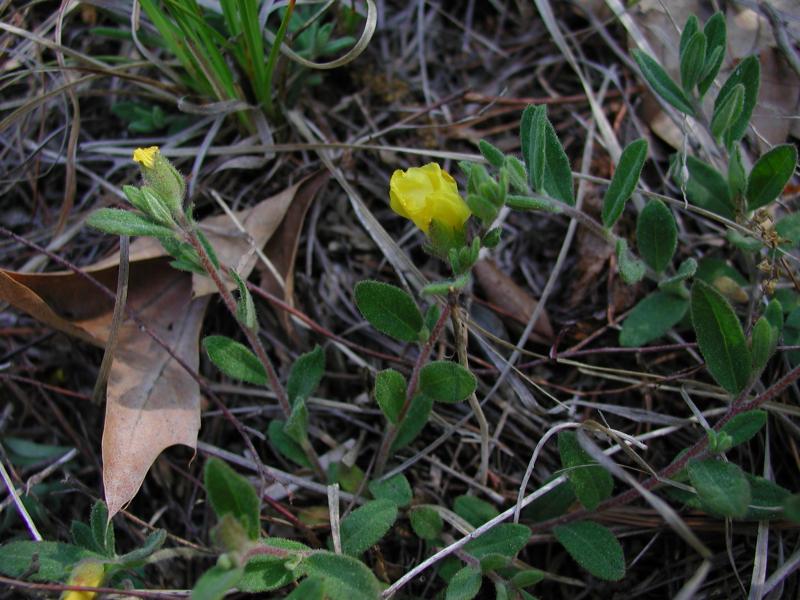 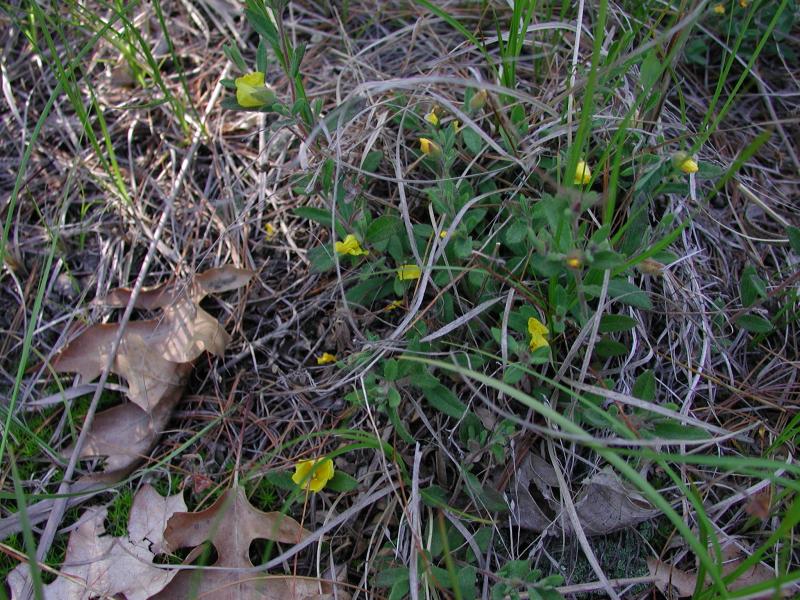 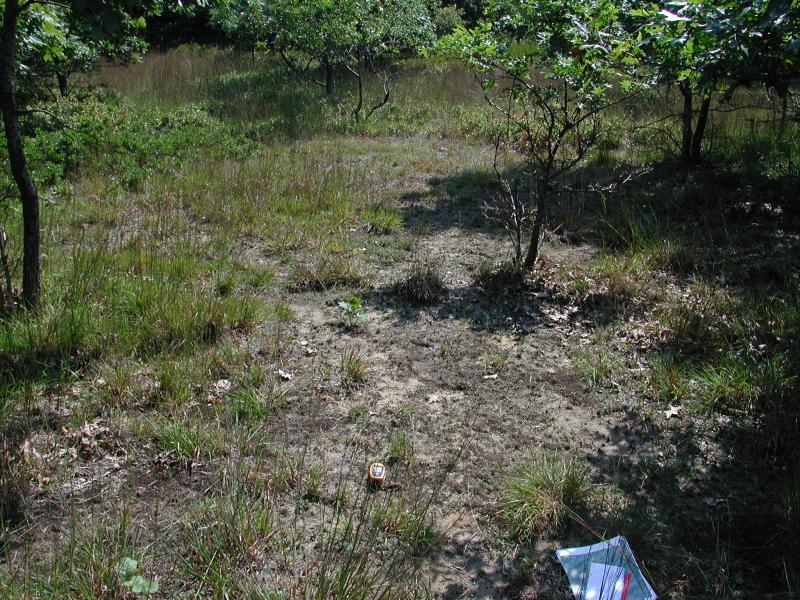 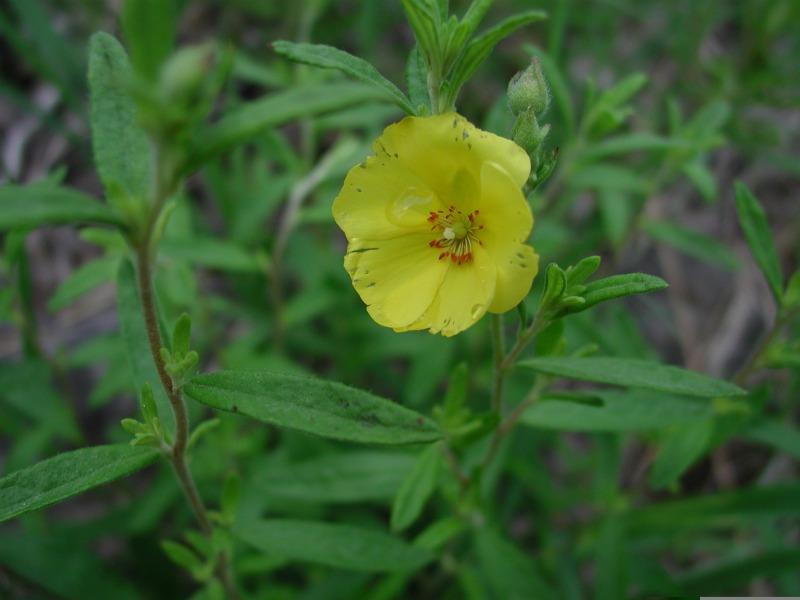 Arrington and Kubitzki (2003) proposed reviving the segregate genus Crocanthemum for New World members of Helianthemum sensu lato based on morphology, nuclear and chloroplast DNA phylogenies, and geography. Their molecular work also shows that Hudsonia is

Information for this guide was last updated on: February 24, 2011