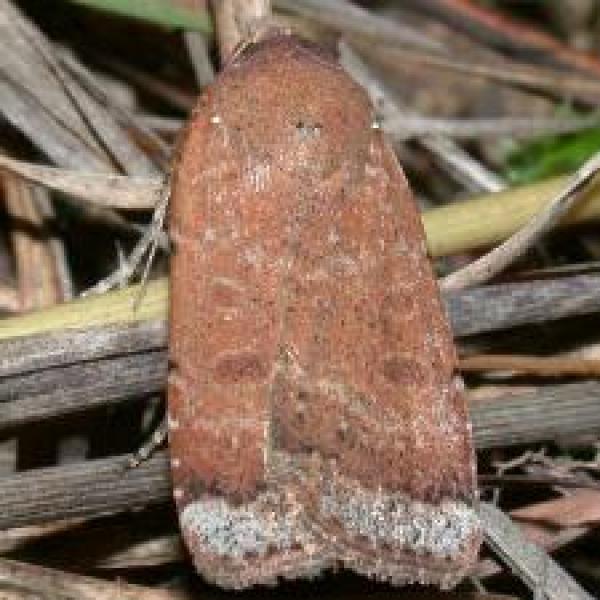 State Conservation Status Rank
S1S3
Critically Imperiled, Imperiled, or Vulnerable in New York - Conservation status is uncertain; could be especially vulnerable, very vulnerable, or vulnerable to disappearing from New York, due to rarity or other factors. More information is needed to assign either S1, S2 or S3.
Global Conservation Status Rank
G3
Vulnerable globally - At moderate risk of extinction due to rarity or other factors; typically 80 or fewer populations or locations in the world, few individuals, restricted range, few remaining acres (or miles of stream), and/or recent and widespread declines.

The word "cutworm" refers to the fact that the larvae of many species in this group cut vegetation near the soil surface and pull the vegetation into a tunnel or chamber underground, where they eat it safe from above-ground predators (Wagner et al. 2008).

The coastal heathland cutworm is likely restricted to Long Island and nearby islands, where potential habitat is abundant. Five current populations are documented; two were first documented in 2007. Additional surveys are needed to better understand the status and distribution of this moth in New York State.

The short-term trend for this moth in New York State appears to be stable. At one of five populations documented in the state, moths were captured in 1995 and 2000, resulting in more than 10 adults captured over the course of the two years. Each of the other four populations were first documented in 1997 or 2007 and have not been surveyed since. Most of these populations are protected. Although several populations might be stable and potential habitat is still abundant on Long Island, it seems that the amount of suitable habitat has been considerably reduced over the past several decades due to development.

The long-term trend for this moth in New York State is unknown. There are historical records from Montauk and Orient. While there are two current populations documented from Montauk, surveys should be conducted in Orient to determine if a population still exists at that location. Although potential habitat is still abundant on Long Island, it seems that the amount of suitable habitat has been considerably reduced over the past several centuries due to development.

General threats include development, insecticide spraying, fire suppression, and excessively large fires on unprotected sites. In New York State, development of habitat seems to be the most likely threat.

This moth is likely to persist if adequate habitat remains and all habitat at a site is not engulfed in a fire during the same season. The moth can occupy small (less than 100 ha) as well as large habitats, and it can travel substantial distances to colonize other suitable habitats, but nonetheless areas where this moth is documented should be evaluated to avoid additional encroachment or fragmentation by development. At some locations, periodic controlled burns or other measures might be needed to restore or maintain habitats where the moth occurs. When prescribed burns are conducted, some areas should be left unburned to provide refugia for the moth. Minimizing lighting to maintain dark sky conditions would also be beneficial.

This moth is documented from eastern Long Island and an offshore island. It is likely restricted to Long Island and nearby islands. There is a historical record from New York City (D. Schweitzer, personal communication), but no documentation.

This is a very disjunct species. Its distribution extends from Cape Cod and offshore islands west to Plymouth, Masachusetts, and includes eastern Long Island and an offshore island in New York. In the early 1900s, it also included East River, Connecticut. It has also been reported from Singletons at Lakehurst (1951) and Dividing Creek (1996) in southern New Jersey, but no populations have been documented there. LaFontaine (1998) indicates that a disjunct population occurs near the mouth of the St. Lawrence River in Canada. Typical A. benjamini in western North America does not get within 2000 kilometers of the range of this subspecies.

Adults fly mostly in July, but some also fly in August and September. Larvae hatch from eggs in the fall. The larvae overwinter and continue to feed in the spring. Pupation occurs in a cell underground. Prepupal larvae of some closely related species (and perhaps this species) aestivate underground for three or four months during the summer before emerging as adult moths (Wagner et al. 2008).

The plants on which the larvae feed have not been documented.

The best time to see the coastal heathland cutworm is during its flight season, from July to September. Most adults fly in July, but some also fly in August and September.

The time of year you would expect to find Coastal Heathland Cutworm present and reproducing in New York.

This fairly minor and extremely disjunct eastern subspecies has been reported from New Jersey, New York, Connecticut, and Massachusetts. It may be a distinct species. The species Abagrotis nefascia (A. crumbi crumbi) is western and widespread, occurring from Colorado to Washington.