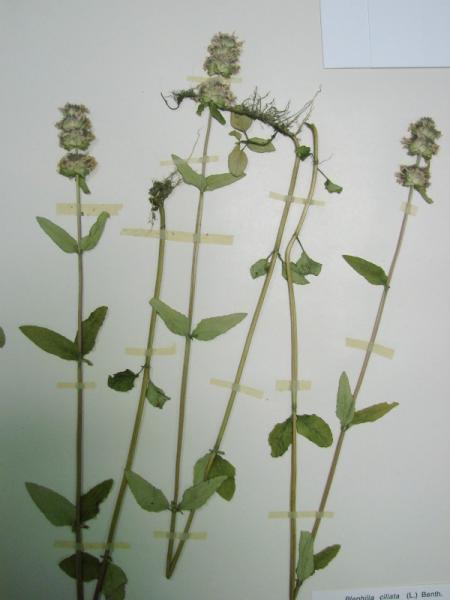 The genus name Blephilia comes from the long hairs on the bracts of the inflorescence that look like eyelashes. This attractive mint is sometimes planted in gardens for its fragrance, beauty and ability to attract butterflies and bees.

The short term trend seems to be stable, although the disturbed habitats where the plant occurs can fluctuate in areas that are suitable for growth.

This plant was never common in the state but it was known historically from nine occurrences in seven counties from Westchester to Ontario counties in the late 1800s and early 1900s when there was much more open habitat in the state. Populations probably remained low throughout the 1900s and now only two existing populations remain.

Plants occur in an old field and a disturbed powerline right-of-way where weedy plant management may affect the viability of these populations. The open habitat of these sites could alternately be threatened by a succession of the open habitat if it is not protected or by too much mowing or weed management that could destroy the plants.

These sites need to be managed to prevent succession of woody species while at the same time preventing destruction by mowing at the incorrect time or through the use of herbicides.

These plants seem to grow in disturbed habitat that is common throughout the limestone areas of the state but it is unknown why this plant is only found in a couple of these sites. A thorough study of habitat preference and plant dispersal is needed.

Downy wood-mint is known primarily from the Hudson Valley from Westchester County to Albany County, with a single historical location from Broome County in Western New York.

Blephilia ciliata is known from Ontario, New York, and Western New England, through the midwestern and southern states, ranging as far south as Georgia, and reaching the western limit of its distribution in Texas, Kansas, and Iowa.

Blephilia ciliata is an opposite-leaved, herbaceous wildflower, the stem covered in short (less than .5mm long) hairs. The flowers are 11 to 14 mm long, are two-lipped, and have pale blue petals with purple spots. These occur in one or several hemispheric (ball-shaped) clusters along the stem, subtended by numerous, finely hairy bracts. These bracts are ovate and about as long as the calyx. The leaves are 3 to 6 cm long, entire or toothed, sessile or nearly so, and smell strongly of mint when crushed.

Blephilia hirsuta has a stem with hairs 1-2 mm long, and the leaves of its flowering stem have a petiole of 1 cm or more. The bracts are shorter than the calyx, and lower calyx lobes are 1 mm or less, not reaching the sinuses of the upper lip.

Downy wood-mint may also be initially mistaken for the very common species Prunella vulgaris, which has longer petioles, 3 stamens (in contrast to Blephilia's 2 stamens), and a less cleft calyx (Voss 1997).

The time of year you would expect to find Downy Wood Mint flowering in New York. 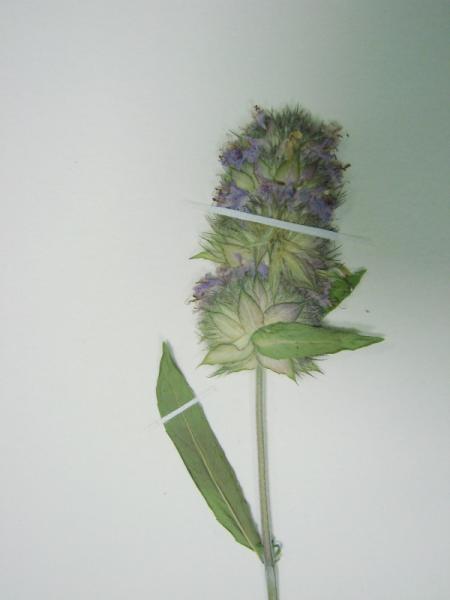