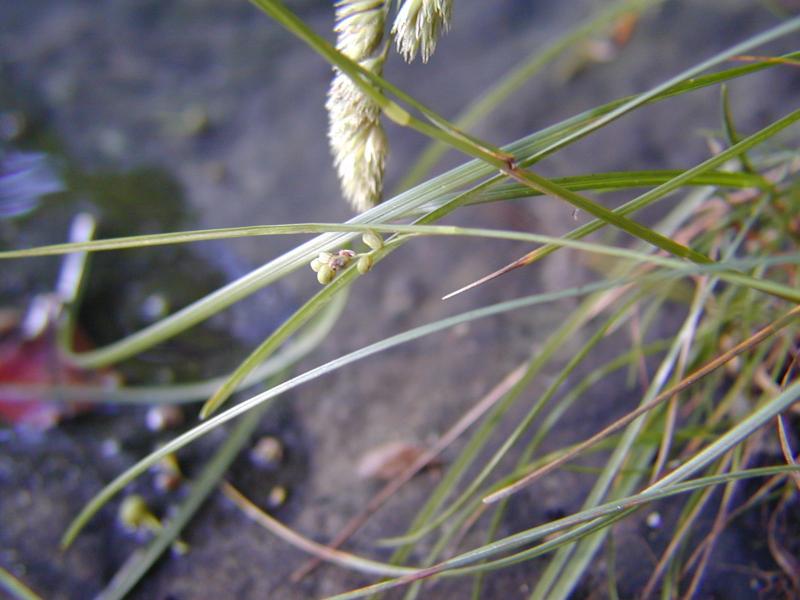 Carex garberi is named for Abraham Pascal Garber (1838-1881) who discovered this plant in Erie County, Pennsylvania (Fernald 1935). When mature, its fruits are white unlike many other Carex species (Ball 2002).

There are only two known populations and ten historical locations for this sedge that is often confused with Carex aurea. These known populations are restricted to the Niagara River Basin and may be threatened by invasive species and alternations to the landscape (including natural erosion and scraping of the cliffs for safety concerns).

At one of the extant populations there has been hundreds of plants present for the past 20 years. The other extant population has only been surveyed once. One population appears to be extirpated although no voucher specimen exists for this population and it may have been misidentified originally. All other populations are only known from historical records. Therefore, short term trends are not definitive but appear to indicate stable to declining populations.

There are two extant populations. Both of these are potentially threatened by invasive species and alteration of the habitat (such as scraping of the cliffs for safety concerns and natural erosion). Trampling and mowing may be a problem at one of the extant populations although, these impacts may be small.

At the extant populations invasive species should be monitored and controlled if they appear to be negatively impacting the populations. All human created disturbances should be minimized.

All voucher specimens should be verified as some may be misidentified. Survey are needed to historical populations.

Carex garberi occurs on calcareous rocks and soils near edges of large rivers. It also occurs on limestone pavements and in fens. It grows in small rivulets and in more open areas. Soils are moist to saturated and can be periodically flooded (New York Natural Heritage Program 2006). Moist shores, meadows, fens, on base-rich soils (Ball 2002). Sandy swales and calcareous gravels (Rhoads and Block 2000). Calcareous sands, gravels, and ledges, especially near the Great Lakes (Fernald 1970).

Carex garberi occurs from western to north central to northern New York in disjunct isolated populations. Many of these populations are historical and the plants from these locales may be misidentified. It is confirmed from at least extreme western New York.

Carex garberi is a tufted grass-like perennial. Its leaves are 1.0-3.5 mm wide. Arising from the bases of the plants are stems 5-40 cm tall. These main stems are terminated by a cluster of flowers/fruits. The upper flowers are female and the lower are male. Female flowers / fruits also occur at the tips of secondary stems which attach to the main stems. Mature fruits are white and 2-3 mm long (Ball 2002).

Carex garberi is a loosely cespitose perennial. Its leaves are 1-2.5(-3.5) mm long and its culms are 5-40 cm long. Proximal spikes are separate while the distal ones are approximate. Lateral spikes are pistillate and the perigynia are relatively densely arranged in these spikes. Internodes in the middle of these spikes are 0.3-0.7 mm long. Terminal spikes are gynecandrous with at least 1/3 of the flowers staminate. The terminal spikes are rarely entirely staminate. Pistillate scales are brown with a paler midvein and hyaline margins. The apices are obtuse to acute. Perigynia are white at maturity and 2-3 mm long (Ball 2002).

Mature fruits do not turn bright orange in C. garberi unlike the similar C. aurea. Therefore, the easiest time to id this speces is when it is in mature fruit but before the fruits have fallen.

Carex aurea is the only other species that occurs in NY that is similar to C. garberi. It has been misidentified in the past as C. garberi. When the perigynia are mature they are strikingly different and perigynia color is the most reliable character distinguishing these two species. Perigynia of C. aurea are bright orange (although they dry brown) vs. white for C. garberi. Additionally, Carex aurea has terminal spikes staminate to occasionally gynecandrous and middle internodes of lateral spikes (0.5-)0.7-1.5 mm long vs. terminal spikes gynecandrous to rarely entirely staminate and middle internodes of lateral spikes 0.3-0.7 mm long for C. garberi (Ball 2002). Fernald (1935) also uses the more prolonged bract blades and longer more often acuminate pistillate scales of C. aurea to separate these two species. When the fruits are immature they are difficult to separate reliably.

The species starts to fruit in early June and the fruits become mature by late June. Therefore, the best time to survey for Carex garberi is mid to late June.

The time of year you would expect to find Elk Sedge fruiting in New York.

Carex garberi is in section Bicolores (Ball 2002). It was originally described as C. aurea var. androgyna in 1871 and raised to the species level as C. garberi in 1935 (Fernald 1935). Some authors including Mackenzie (1931-1935) have lumped C. garberi under C. hassei. Carex hassei sensu stricto is a western North American species. Carex garberi and C. hassei are currently accepted as distinct in Flora of North America (Ball 2002). In New York, the names C. aurea, C. bicolor, and C. hassei have been misapplied to C. garberi (Zenkert 1934, New York Natural Heritage Program 2006). Carex bicolor and C. hassei do not occur in New York while C. aurea does (Ball 2002). Carex aurea is much more common in New York than C. garberi and can be difficult to distinguish from it when immature (Fernald 1935).