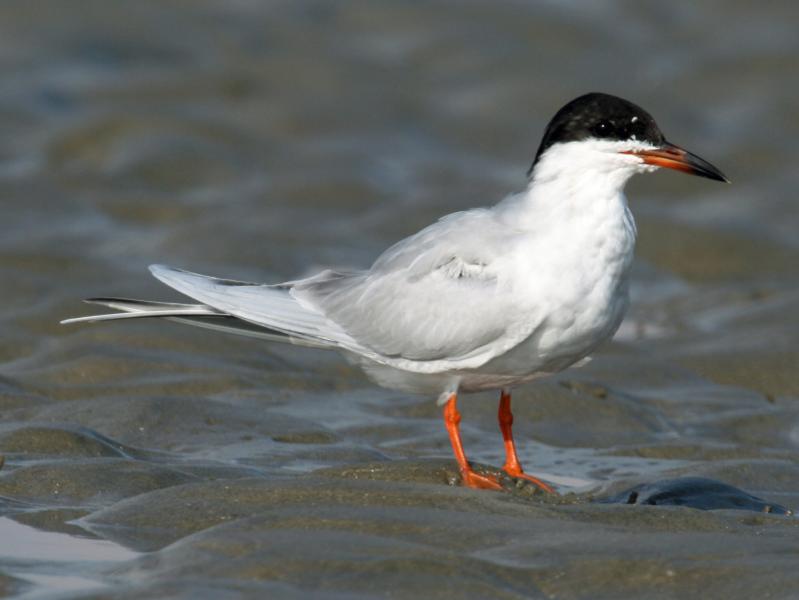 State Protection
Protected Bird
Defined as a Protected Bird by New York State law, and the species may not be hunted or taken at any time in New York. Includes birds also defined as a game species, but for which no open seasons are set.
Federal Protection
Not Listed

Forster's Terns are the only terns whose summer (breeding) and winter (non-breeding) ranges and migration range are located almost completely in North America.

Forster's Terns are a recent addition to New York's avifauna with the first nest found in the state in 1981 (Levine 1998). New York is the northern extent of their eastern range. They are currently threatened by habitat loss and historically, in parts of their range, populations have likely been affected environmental toxins (1960s-1970s) and hunting for feather collection by the millinery trade, or hat making industry (1880s). As populations increase in New York they may be restricted by habitat availability, human disturbance and rising sea-levels due to climate change.

The distribution and numbers of Forster's Terns have increased in New York over the past few decades. They were found in only 2 atlas blocks during the first Breeding Birds Atlas in 1980 to 1985, and in 10 blocks in the second Breeding Bird Atlas in 2000 to 2005 (Andrle and Carroll 1988, McGowan and Corwin 2008). They are known as a breeder in the state only since 1981 (Zarudsky 1981) and have been increasing in numbers, slowly, since this time (McGowan and Corwin 2008). They are currently known from roughly 12 colony locations in the state although colony presence at any particular site in a given year as well as colony numbers fluctuate broadly between years (NYSDEC 2011).

The first breeding record of Forster's Terns in the state was in 1981 (Levine 1998). Because the species is a relatively new addition to New York's avifauna, the long-term trend is increasing.

Forster's Terns have been affected by habitat loss, hunting for feathers by the millinery trade, or hat making industry (1880s), and likely by environmental toxins (1960s-1970s) in parts of their range. Current threats in New York include human disturbance, flooding and habitat loss (Mcnicholl et al. 2001). Recreational boaters driving at high speeds or anchoring near salt marsh islands may disrupt terns from parental care of eggs and chicks leaving them vulnerable to predation. Mortality due to hypothermia has been reported when young chicks fled to the water in response to observers near nesting locations (Hall 1989, Fraser 1994a). Although Forster's Terns don't occur in large numbers in New York, populations may be threatened by habitat loss. A combination of factors may contribute to the dramatic declines of coastal salt marsh observed on Long Island over the last 50 years (Hartig 2002). Sea-level rise and increased storms and flooding due to global climate change is a threat to the salt marsh habitat that Forster's Terns require for nesting. Changes to hydrologic processes resulting from coastal development coupled with increases in sedimentary sulfide associated with human development are also believed to play primary roles in the decline of coastal salt marsh (Montalto and Steenhuis 2004, Kolker 2005).

Management for Forster's Terns requires both the protection of existing colonies to enable populations to perpetuate and grow, and the restoration and protection of habitat for terns to move into as populations expand or disturbed colonies need to relocate. Managing predators may be effective in certain circumstances where nest predation is high as has been effective for other tern species (Molina et al. 2010). Maintaining and protecting habitat at a number of suitable nesting locations is ideal even if some sites are temporarily unoccupied to allow colonies to relocate when disturbance occurs. Posting educational signs just prior to the nesting season has been an effective method at limiting human disturbance to colonies of other tern species on beaches (Burger 1989).

Forster's Terns have been studied less than other North American Tern species (Mcnicholl et al. 2001). More research is needed to determine their specific habitat requirements. Additionally, research into stopover locations and winter ecology is needed, especially to determine winter movements (Mcnicholl et al. 2001). Since there is much variability in nesting success between years and individuals may exhibit low site tenacity readily switching breeding colonies, long-term studies of reproductive success on marked birds are needed to determine trends in population numbers and productivity over time.

In New York, Forster's Terns nest on marsh islands located in bays off the south shore of Long Island (Connor 1988b, McGowan and Corwin 2008, Sommers et al. 2001). They often nest on wrack material that has been been deposited on top of cordgrass stands during flooding and storms (Martin and Zwank 1987). This material is useful because it is elevated higher than the usual high water line and may float during floods (McGowan and Corwin 2008).

The range of Forster's Terns in New York is highly restricted. The species is known as a breeder in the state only since 1981 (Zarudsky 1981) and only occurs on marsh islands off the south shore of Long Island (Mcnicholl et al. 2001, Sommers et al. 2001, McGowan and Corwin 2008). Significant breeding locations in the state include Jo Co Marsh in Jamaica Bay, and the Cinder Island and Cuba Island groups.

The Forster's Tern is a medium-sized tern most often occurring in and around marshes. They are white below, pale grey above, with a black cap and mostly orange bill.

Forster's Terns are a medium-sized tern most often occurring in and around marshes. They measure 33-36 cm (13.0-14.2 in.) in length and weigh 130-190 g (4.6-6.7 oz.). The sexes appear similar (Mcnicholl et al. 2001). The adult breeding plumage is white below, pale grey above, with a black cap and nape. The birds have a mostly orange bill, orange legs, and orange feet. They have a long, deeply forked grey tail with white outer edges. When they are in flight, the upperwing area appears pale due to the grey primaries (long flight feathers that extend along the outer edge of the wings), and the white rump contrasts with the grey back and tail (National Geographic Society 1983). The adult nonbreeding plumage has a black "mask" around the eye and over the ears instead of a black cap. The mask does not reach the nape or rear of the top of the head. The forehead is white, bill is black, and feet are orange (Mcnicholl et al. 2001). Compared to adults, juveniles and first-winter birds have shorter tails and generally more dark color in the wings and darker primaries. Juveniles have a brown cap, dark eye patch, and a faint or absent bar on the shoulder. Calls of Forster's Terns include a hoarse "kyarr" that is lower and shorter than that of Common Terns (Sterna hirundo). They nest in colonies that are widely spaced in marshes (National Geographic Society 1983). Nests can occur as scrapes in the mud or sand with little or no lining, in clumps of vegetation or on floating vegetative mats, or on top of muskrat lodges (Mcnicholl et al. 2001). Clutches usually contain two to three eggs. Less often, they contain one or four, and very rarely, up to six. The background color of the eggs is usually olive to buff or pinkish buff, with many brown spots, small blotches, and crooked lines that often decorate the larger end (Bent 1921, Mcnicholl 1971). The eggs are smooth, but not glossy (Harrison 1979).

The combination of characterstics that distinguish this species are: a tern with a pale grey back, black cap, orange legs and bill (with a black tip), long legs and bill, and deeply forked tail (National Geographic Society 1999).

Adults in breeding plumage are easiest to identify but juveniles and birds in their winter plumage can also be distinguished from other tern species.

Forster's Terns forage aerially over flooded mudflats or calm waters for insects and fish. They may forage alone or in mixed-species foraging aggregations (Schreffler et al. 2010). Pairs are monogamous, at least for the breeding season. They may nest colonially, co-occuring with other Larids including Common Terns (Sterna hirundo) and Laughing Gulls (Larus atricilla). Forster's Terns are territorial during the courtship period. A study of California Forster's Terns found that colonies were attended in roughly equal amounts by males and females, with the females more frequently present at night and the males more frequently present during the day (Bluso-Demers et al. 2010).

The diet of the Forster's Tern consists mainly of small fish and arthropods (McNicholl et al. 2001).

Forster's Terns may be observed in NY in the spring, summer, or fall. Breeding individuals are present on Long Island from late May into August. Forster's Terns may appear along the coast or Great Lakes during spring (April into May) or fall migration (mid to late August through November), and are more common in the fall (Levine 1998). They are also found along the lower Hudson River (mostly south of Dutchess County) in the fall , as well (Levine 1998).

The time of year you would expect to find Forster's Tern active and reproducing in New York. 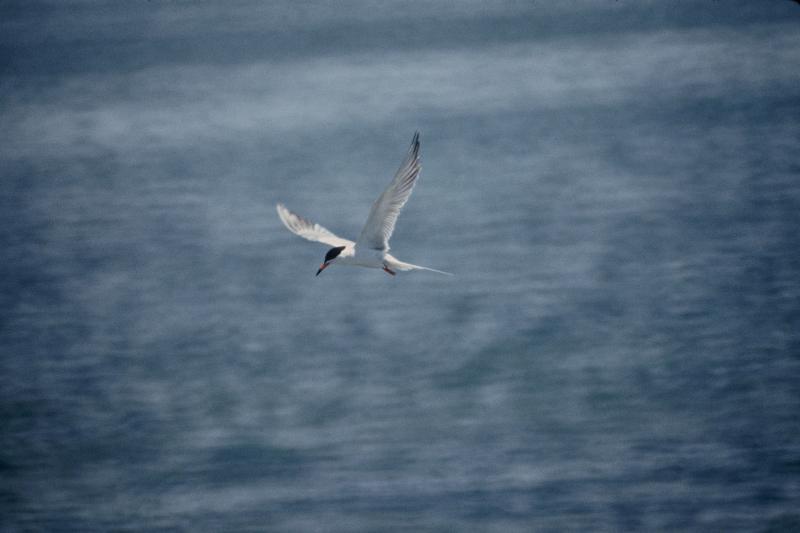 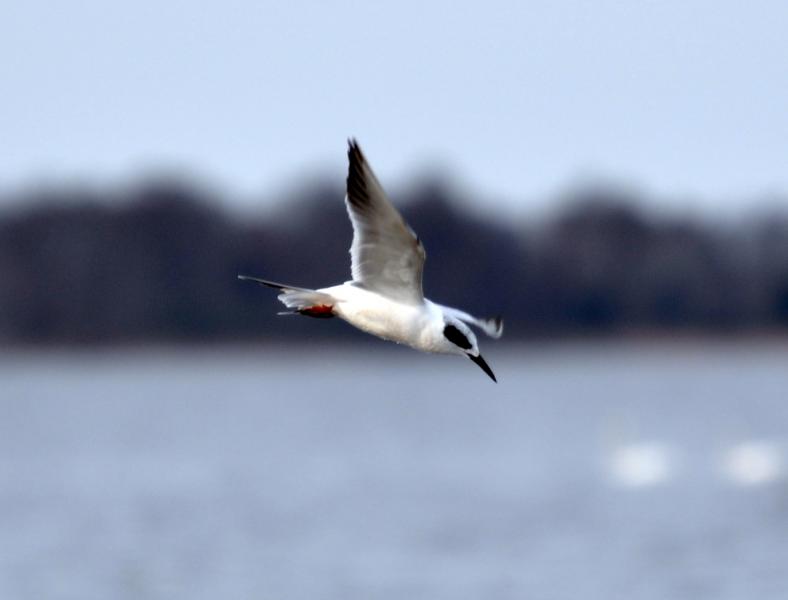 Schreffler L., J.K. Leiser, and T.L. Master. 2010. Costs and benefits of foraging alone or in mixed-species aggregations for Forster's Terns. The Wilson Journal of Ornithology 122:95-101.

Information for this guide was last updated on: June 17, 2011