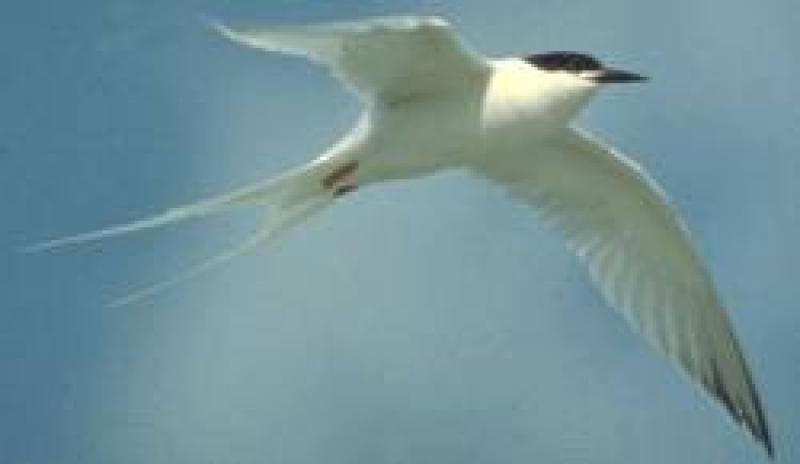 State Protection
Endangered
Listed as Endangered by New York State: in imminent danger of extirpation in New York. For animals, taking, importation, transportation, or possession is prohibited, except under license or permit. For plants, removal or damage without the consent of the landowner is prohibited.
Federal Protection
Endangered; Migratory Bird Treaty Act
Listed as Endangered under the Federal Endangered Species Act ; The Migratory Bird Treaty Act implements various treaties and conventions between the U. S. and Canada, Japan, Mexico and the former Soviet Union for the protection of migratory birds. Under this Act, taking, killing, or possessing migratory birds, including nests or eggs, is unlawful unless specifically permitted by other regulations.

State Conservation Status Rank
S1B
Critically Imperiled in New York - Especially vulnerable to disappearing from New York due to extreme rarity or other factors; typically 5 or fewer populations or locations in New York, very few individuals, very restricted range, very few remaining acres (or miles of stream), and/or very steep declines. (A migratory animal which occurs in New York only during the breeding season.)
Global Conservation Status Rank
G4
Apparently Secure globally - Uncommon in the world but not rare; usually widespread, but may be rare in some parts of its range; possibly some cause for long-term concern due to declines or other factors.

Over 95% of New York's Roseate Terns breed at a single location, Great Gull Island, on Long Island. It is also a globally significant breeding colony because of its size.

There is only one sizeable colony in New York. Roseate Terns are threatend by loss of breeding habitat from coastal development, rising sea-levels, human disturbance, predation, and increased flooding from storms due to climate change. Buckley and Buckley (1981) suggested that North Atlantic populations may be relict, citing that the species core distribution is tropical. Roseate Terns are listed as endangered in the state by the NY Department of Environmental Conservation and the northeatern U.S. population is federally listed as endangered.

Historical trends are not entirely known but numbers likely declined significantly along with other tern species in the late 1800's and early 1900's due to hunting and the millinery trade. Eaton (1910) reported only a few known nesting locations (McGowan and Corwin 2008). The passage of the Migratory Bird Treaty Act in 1918 enabled recovery to begin and numbers increased during the mid-1900's (Bull 1974). From 1974 to 1977 the species suffered significant declines simultaneously in New York and Massachusetts (Buckley and Buckley 1981). By 1978 Roseate Tern numbers had declined by 66% on Long Island (Buckley and Buckley 1981). As a result of this decline, the remaining birds were concentrated in a few large colonies (Buckley and Buckley 1981, Nisbet 1980, Hays 1998).

Roseate Tern numbers were reduced by egging and the millinery trade before the passage of the Migratory Bird Treat Act in 1918. Today, Roseate Terns are threatened by habitat loss and degradation, human disturbance, hunting and egg collecting, increased predation, rising sea-levels, and increased flooding from storms due to global climate change. The concentration of large numbers of Roseate Terns at a few breeding locations is in itself a threat. Environmental factors like storms and flooding and biological factors such as a low nest success due to predation can result in years of low productivity. If these occur in just a few colonies, it could affect the viability of the species in the entire northeastern U.S.

The establishment of additional large, protected, and successful colonies would benefit this species. Colony restoration by first removing gulls is controversial but has been successful at restoring colonies at two locations in Maine and one in Massachusetts (Gochfeld et al. 1998). Restoration of offshore sites that have greater protection from predators is essential to ensure long-term success (USFWS 1998). Predator control may be necessary at some sites where predation is high. Maintaining and protecting habitat at a number of suitable nesting locations is ideal even if some sites are temporarily unoccupied to allow colonies to relocate when disturbance occurs (McGowan and Corwin 2008).

Annual productivity estimates on Great Gull Island seem to indicate good breeding success in that colony (Cormons, pers. comm.). Continued productivity monitoring, in addition to the population index counts that are conducted annually, are needed to monitor the population. If breeding success is low, possible causes should be identified and management actions taken, if possible. In order to ensure adult survival during the nonbreeding season, research on threats to the species on its wintering grounds should continue. Research is currently underway in Brazil (Hays et al. 1997, 1999). In addition, Brazilians from Aquasis in cooperation with the Great Gull Island Project are working to protect the species on the coast of Ceara in Northern Brazil (Hays 2009/2010). Until recently, little was known of the behavior, feeding, and timing and locations of movements on the wintering grounds. However, initial studies currently are underway (Hays in prep.). Research is also needed to determine migratory routes and stopover locations and the relation of these movements to fish availability (Gochfeld et al. 1998). Puerto Rico was recently identified as a stopover location when Gabriel Lugo photographed banded Roseate Terns during migration (Hays et al. 2010).

Roseate Terns nest almost exclusively on islands where predation pressure may be lower than on mainland sites. The largest colony occupies a rocky island with smaller colonies occuring on barrier beach islands and saltmarsh islands. Colonies are often located close to shallow-water locations for fishing (Gochfeld et al. 1998). Nest sites occur most often in dense grass or under boulders and occasionally in more open sites (Jones 1906, Bull 1964, Hays and Pessino 1970, Gochfeld et al. 1998). They can nest on a variety of substrates including sand, shell, rock, and vegetation.

The Roseate Tern's breeding distribution is highly localized throughout its range. Breeding in New York is confined to Great Gull Island and a few scattered locations on Long Island annually. It occurs inland only accidentally. Great Gull Island is recognized as a globally significant colony because of the large number of birds that breed there. Cartwright Island was the next largest colony in New York but it exisits on a sandbar that has been underwater in recent years.

The distribution of the Roseate Tern is widespread and includes the Atlantic, Indian, and southwestern Pacific oceans. BREEDING: Their breeding range in the Americas extends locally along the Atlantic coast of North America, mainly from Quebec to New York; also Dry Tortugas, Florida Keys, Bahamas (Sprunt 1984), and other islands of West Indies, islands off Venezuela, and islands off the northern coast of Honduras and Belize (Spendelow and Patton 1988). In northeastern North America, over 90% of the breeding population is concentrated in three colonies: Great Gull Island in NY, and Bird and Ram Islands in MA. NON-BREEDING: Roseate Terns overwinter in the Americas, primarily along the Brazilian coast (Hays et al. 1997, 1999).

Roseate Terns are a slender, medium-sized tern with bright orange-red legs, a light gray back, and a deeply forked tail. The bill is entirely black when they arrive in May and shows increasing amounts of red at the base as the breeding season progresses (Donaldson 1968, Cormons 1976).

Roseate Terns are slender, medium-sized birds, measuring 33-41 cm (13.0-16.1 in.) in total length and weighing 95-130 g (3.4-4.6 oz.). Breeding adults have a black cap and nape. They have pale gray upperparts and white underparts with a slight pinkish appearance that is not very evident during the summer but is sometimes visible in good light. The bill is entirely black when they arrive in the spring and gradually becomes red at the base during the breeding season. The tail is white, deeply forked, and extends well beyond the wings when a bird is standing with its wings folded. The legs and feet are bright red-orange. Hybrid Common X Roseate Terns have been found with intermediate characteristics (Hays 1975). Non-breeding adults have a black mask that extends from the eye to the nape and do not have a black cap. Non-breeding adults also have a white forehead and pale streaks on the rear part of the head just above the nape (hindcrown), white underparts, and a shorter tail (Gochfeld et al. 1998). Nonbreeding adults often also show the rosy blush, which is sometimes more noticeable than on breeding birds (Hays et al. 2006). Juveniles have a brownish cap that extends over the forehead, mid-back, and folded wings that looks coarsely scaled. They have a lower back that is barred with black. First-summer birds have a white forehead. Some second-year birds have a small amount of white above the base of the bill with black speckling (Donaldson 1969). Birds attain full adult plumage by their second winter (National Geographic Society 1983). Roseate Terns are very vocal in breeding colonies and feeding flocks. At these times, they make loud "pink" and "ki-rik" notes that are sharp and high-pitched. When mobbing an intruder near a nest, they will make a harsh, raspy, single-pitch "aaach" or "kraak" call that sounds like tearing cloth. When attacking terrestrial predators, they will often make a staccato "kekekekekekekeke" sound, sometimes while swooping towards the intruder, ending in a harsh "aaach" when they are nearest. In temperate zones, clutch sizes usually range from one to four eggs. Eggs are various shades of brown, with blackish brown streaks and speckles. It is often difficult to distinguish the eggs of Common Terns and Roseate Terns. However, Roseate Tern eggs are usually more uniformly marked, have more small spots and fewer blotches, and have a darker background color that is less likely to be greenish (Gochfeld et al. 1998).

The combination of characters that distinguish this species from other adult terns during the breeding season are: orange-red legs and feet, pale gray back, deeply forked tail, and a black bill with red at the base. The rosy tint on the breast is generally not a useful character during the summer because it is subtle.

Adults in breeding plumage are easiest to identify but juveniles and birds in their winter plumage can also be distinguished from other tern species.

Roseate Tern pairs are monogamous for the breeding season. They breed in large colonies, frequently with Common Terns (Sterna hirundo) (Bent 1921, Cramp 1985). They have various breeding displays in the air and on the ground (described in detail by Cullen 1960, Cullen 1962, Cramp 1985). Both parents take turns incubating eggs and brooding and feeding chicks. Chicks are semi-precocial at hatching, meaning they aren't fully capable of thermoregulating and feeding themselves. They are already covered in down when they hatch, and they open their eyes and walk as soon as they are dry (Cormons pers. comm.). Adults exhibit a strong fast, flight with shallow wing beats. To capture fish they use an aerial plunge dive and submerge briefly (Gochfeld et al. 1998), remaining underwater for up to 2.5 seconds (Nisbet 1981, Duffy 1986). Roseate Terns have an impressive array of aerial defenses. When a predator or suspected threat enters their territory, they may circle above them, swoop at them, and/or dive-bomb them while giving an attack call (Gochfeld et al. 1998).

Roseate Terns arrive at their breeding grounds in northeastern North America from late April through May with subadults and juveniles sometimes arriving into mid-July (Gochfeld et al. 1998, Nisbet 1989). Staging for fall migration occurs in August through September (Nisbet 1984, Shealer and Kress 1994). Roseate Terns are most often present in New York from early-May through September.

The time of year you would expect to find Roseate Tern active and reproducing in New York. 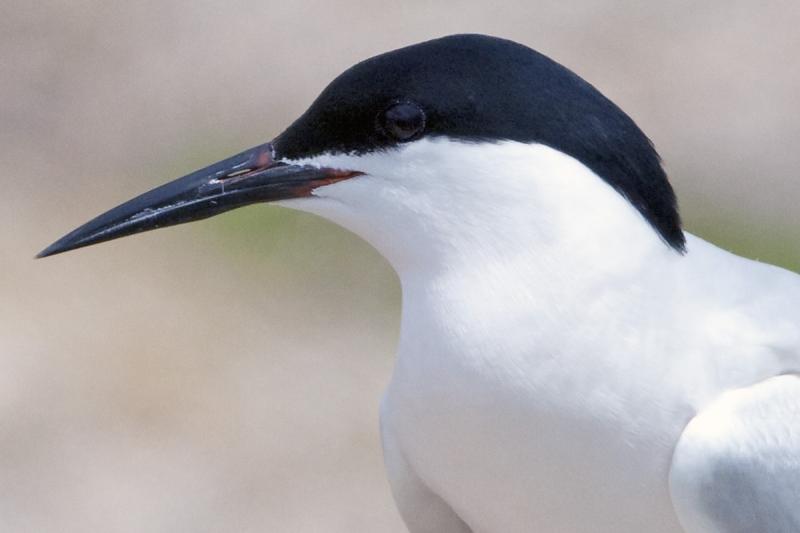 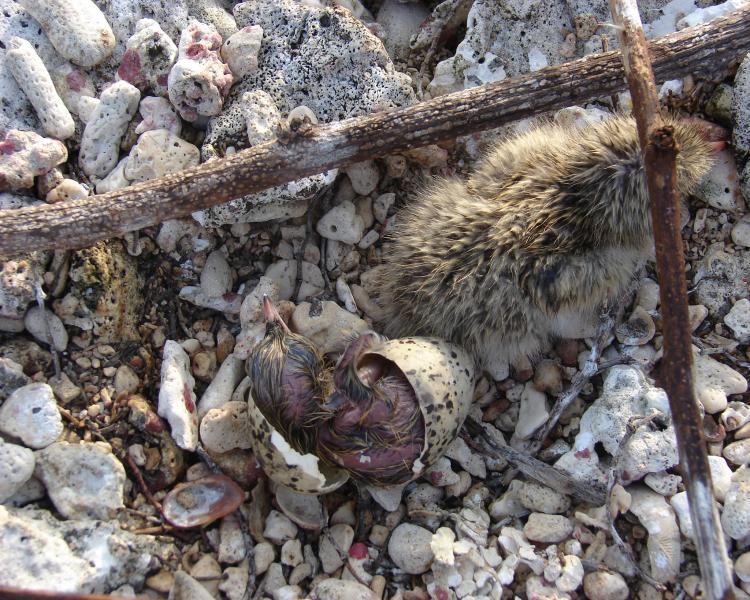