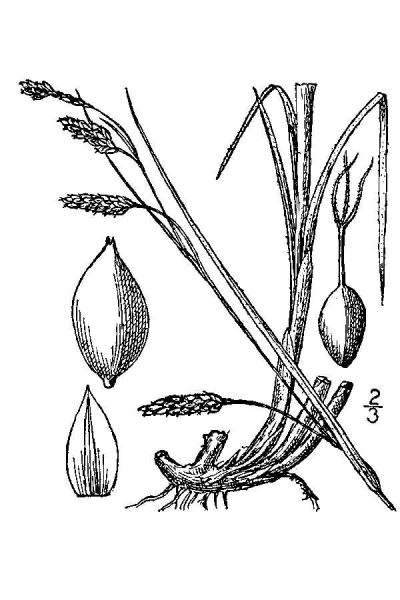 The specific epithet formosa means finely formed, handsome, and beautiful (Stearns 2004). While a very beautiful plant, at least to those that enjoy sedges, this plant is perhaps no more handsome than many of its closest relatives. It must be its charisma that brings out its true beauty.

There are twelve known populations and at least 20 additional historical locations. Only three populations have more than 100 stems. There is some speculation that this sedge is overlooked, but it also has a very limited habitat and is distinct to those familiar with sedges. More survey work is needed at the various historical sites, as well as other areas with promising habitat.

Of the 11 extant sites known about 8 were first documented within the past 20 years. These populations were probably overlooked in the past because this species is similar to other ones, the window for identification is small, and Carex species are often overlooked. One known site has recently been impacted by road construction but the full extent of this impact is unknown. Overall, there is no clear short term trends for this species.

At least six extant populations have under 50 plants present. Regular monitoring of these populations over time will help to understand if these small populations indicate a downward trend, are merely a part of a fluctuating cycle, or represent an average population size for this species.

Surveys need to be conducted to all historical populations.

Carex formosa occurs in forests, forest edges, road sides, or less frequently in open meadows. The soils vary from fairly dry to mesic to occasionally seasonally or perennially wet although these wet soils are often actually adjacent to the populations. It occurs in areas where the bedrock is limestone or the soils are calcareous. A good place to look for this species is in limestone forests (New York Natural Heritage Program 2005). Mesic to dry deciduous forests and ravines, moist meadows, usually associated with calcareous soils (Waterway 2002). Dry calcareous woods (Rhoads and Block 2000). Moist soil in woods and thickets (Gleason and Cronquist 1991). Calcareous woods, thickets and meadows (Fernald 1970).

Carex formosa occurs thinly scattered throughout a large part of the state. It is absent from Long Island, most of southeastern New York, the highlands of the Adirondack, and the southern tier. It is close to the southern boundary of its range in New York with one population known each for Pennsylvania and New Jersey.

Carex formosa is a densely tufted perennial grass like plant. Its leaves are strap like and 3-7 mm wide. Leaves at the base of the plants have maroon bases. Arising from the leaves at the bases of the plants are stalks that are 30-80 cm tall. Coming off the upper part of the stalks are secondary branches with elongated clusters of small inconspicuous flowers/fruits at the tips. The secondary branches and flower clusters arch. The flowers mature into small green fruits (perigynia) 3.5-5.0 mm long (Waterway 2002).

Carex formosa is a densely cespitose perennial. Basal leaf sheaths are maroon at their bases. Basal leaf blades are 3-7 mm wide and pilose abaxially. Culms are 30-80 cm tall. 3-5 spikes which arise singly at the nodes are present on the distal part of the culms. The lateral ones are on elongated peduncles which, with the spikes, arch or dangle at maturity. The lateral spikes are pistillate with 1-2 staminate flowers at their bases. The terminal spikes are gynecandrous. Perigynia are 3.5-5 mm long, have a short stipe, and abruptly narrow to a short (<0.5 mm long) beak (Waterway 2002).

This species is difficult to distinguish from many similar species when vegetative. The best time for identification is when the plants are in immature to mature fruit but the fruits are not yet easily shedding.

Carex formosa is in section Hymenochlaenae affectionately known as the green dangly jobs which characterizes the dangling lateral spikes at maturity. There are numerous other species in this section that occur in New York including C. aestivalis, C. arctata, C. castanea, C. davisii, C. debilis, C. gracillima, C. prasina, C. sprengelii, C. sylvatica, and C. venusta. Many of these are superficially similar. Carex formosa differs from all of them in having lateral spikes with a few staminate flowers at the base vs. being entirely pistillate or in C. sylvatica and C. sprengelii being pistillate, staminate, or androgynous (staminate flowers above and pistillate below). Other differences include:

Carex gracillima (one of the most common members in much of NY) and C. aestivalis have beakless and shorter perigynia. In addition, C. gracillima has generally glabrous foliage.

Carex davisii like C. formosa has a preference for calcareous soils but is more of a southern and midwestern species at the northern edge of its range in NY. It has larger perigynia 4.5-6.0 mm long and pistillate scales with elongated awns (2.5-3 mm long vs. less than 1.0 mm long for C. formosa).

Carex prasina is fairly distinct compared to C. formosa. It has spikes that are closer together, glabrous blue green foliage, and perigynia with two main veins but otherwise veinless (compared to 7-12 fine veins for C. formosa).

Carex venusta is confined to Long Island, in NY, where C. formosa is not known to occur. Carex venusta has glabrous leaf blades and larger perigynia (4.6-9 mm long) (Gleason and Cronquist 1991, Waterway 2002).

This species is in immature to mature fruit from late May till mid-August or even later, especially in the northern parts of NY. Towards the end of this season the fruits are starting to shed easily and early on in this season the fruits are not ripe enough for easy identification. Therefore, surveys are most successful from early June until early July or a little later in northern New York.

The time of year you would expect to find Handsome Sedge fruiting in New York. 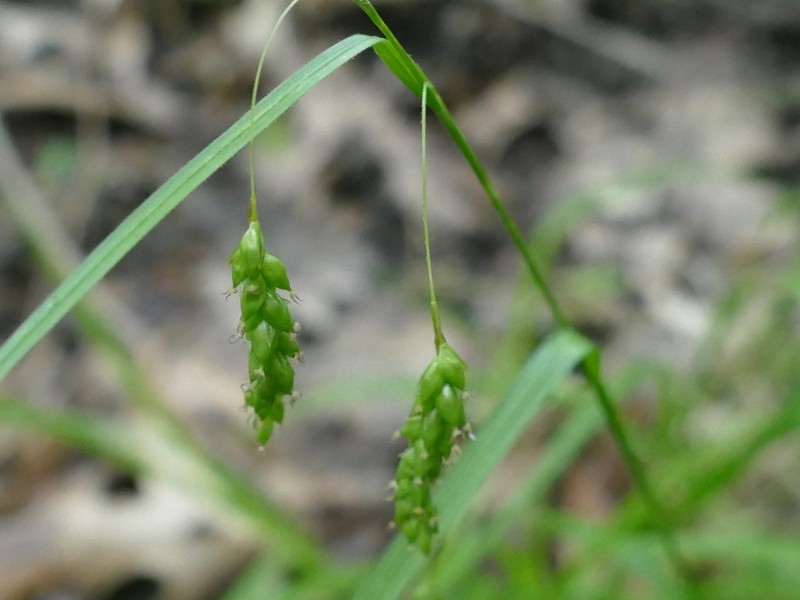 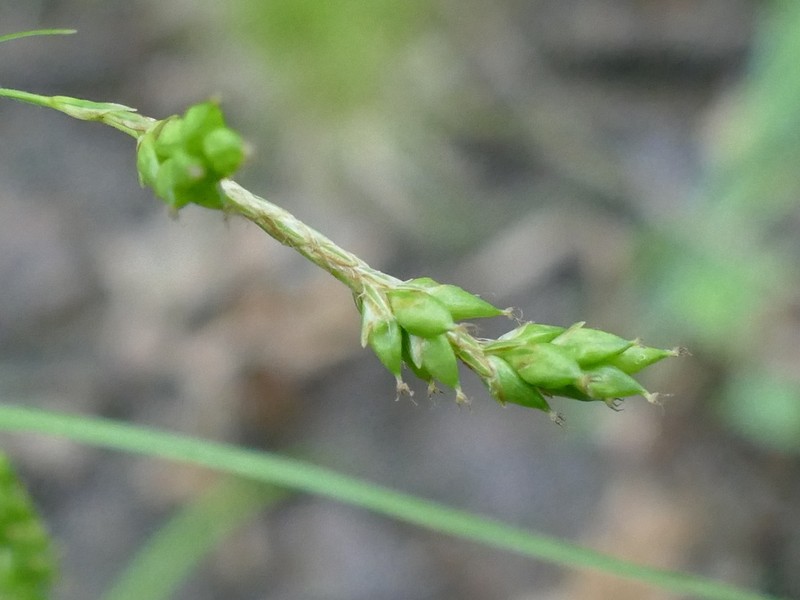 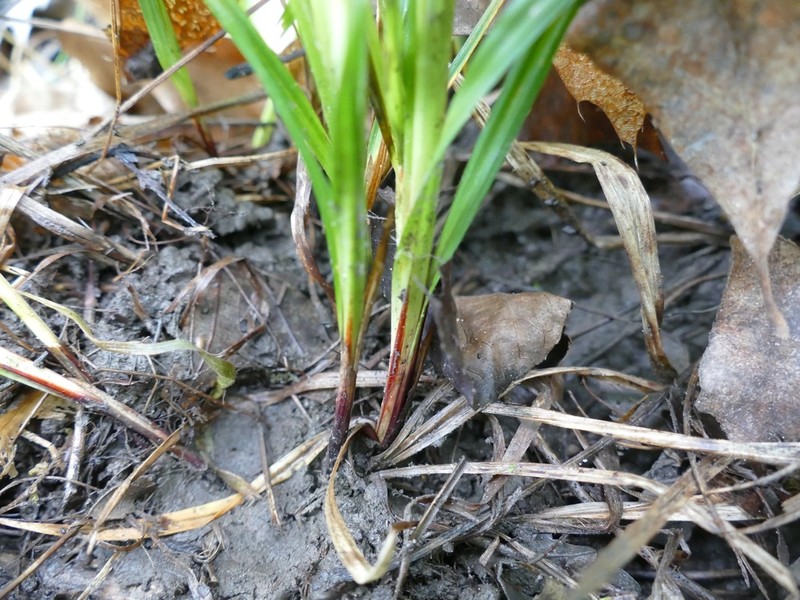 Carex formosa is in currently placed in section Hymenochlaenae but will probably be moved to another section once further studies are completed (Waterway 2002).