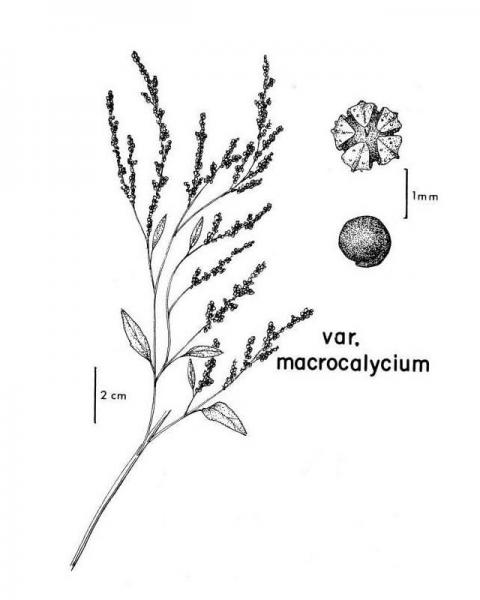 State Conservation Status Rank
S1S2
Critically Imperiled or Imperiled in New York - Especially or very vulnerable to disappearing from New York due to rarity or other factors; typically 20 or fewer populations or locations in New York, very few individuals, very restricted range, few remaining acres (or miles of stream), and/or steep declines. More information is needed to assign either S1 or S2.
Global Conservation Status Rank
G5T4
Apparently Secure globally - The subspecies/variety is uncommon in the world but not rare; usually widespread, but may be rare in some parts of its range; possibly some cause for long-term concern due to declines or other factors. (The species as a whole is common globally.)

There are four existing populations that are restricted to the small area of Fishers Island in Long Island Sound but the number of plants is presently unknown. There are 19 additional collections from the New York City and Long Island area known from the late 1800s and early 1900s that have not been resurveyed. Those from western Long Island and around New York City are probably extirpated.

Short-term trend is unknown because the populations found in 1990 have not been resurveyed.

Even though many old records have not been rechecked those from the Western Long Island and New York City areas are probably extirpated.

Existing populations are not protected and may be under threat by users of the site. It is unknown if these saltmarshes are threatened by Phragmites.

Research is needed to compare the habitat characteristics of existing populations to the habitat of old records to see if similar conditions exist where plants could be found. We would like to know if plants are primarily found in natural conditions or in weedy areas.

The species was historically found in all counties on Long Island, Staten Island, and north to the Bronx. It is currently known only on Fishers Island in Suffolk County.

This herb is most common in eastern states from South Carolina north to New York and Massachusetts. There are disjunct populations in Indiana and Nova Scotia while it is considered exotic in New Brunswick.

Large Calyx Goosefoot is an annual, erect herb usually less than 50 cm tall. The leaves are lance-shaped and 1 to 6 cm long, the lower halves with a few teeth or lobes. The infloresence is an erect spike with leafy bracts and many small greenish (turning reddish) flowers. The seeds are 1.3 to1.9 mm in diameter, brown or black, and with pitted surfaces.

Specimens with fruit are best for identification.

Large Calyx Goosefoot flowers in July and August and the fruits, needed for identification, mature in September.

The time of year you would expect to find Large-calyxed Goosefoot flowering and fruiting in New York.