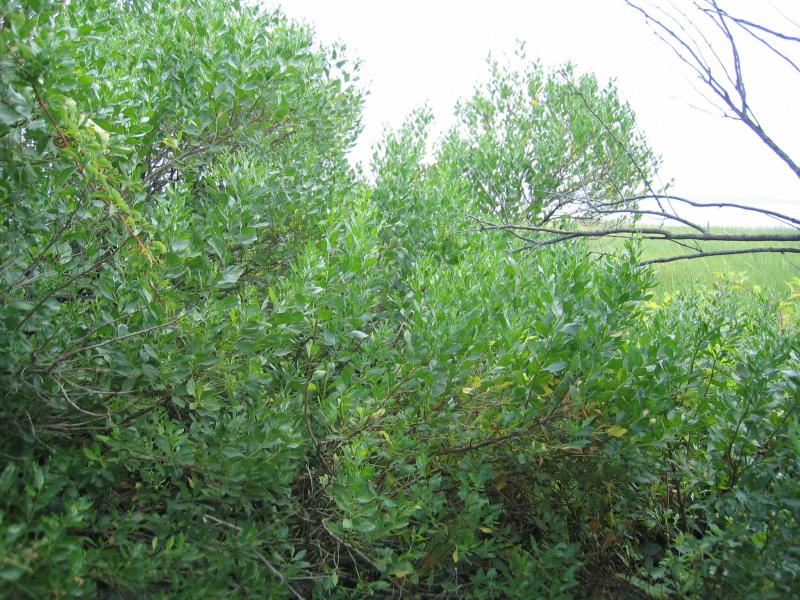 Salt shrub is perhaps one of the best communities to see the interaction of the landscape and tidal range. Large areas of salt shrub can be found where there are broad, gentle slopes intersecting the upper range of spring and storm tides. Where slopes of the marsh basin are steep and the intersection with the tidal range is narrow, salt shrub is condensed into a thin band (MacDonald and Edinger 2000).

There are estimated to be between 20 and 50 occurrences statewide. The very few documented occurrences have good viability and are protected on public land. The community is restricted to sheltered areas of the seacoast in the Coastal Lowlands and Manhattan Hills ecozones. The current trend of the community is declining and the primary threat to this community is invasion by common reed (Phragmites australis). Secondary threats, common to all salt marsh complexes, include ditching and draining, dredging and filling, poor water quality, diking and impoundment, inlet stabilization, shoreline hardening, wrack accumulation, altered sediment budget, subsidence, changes in water circulation patterns, restricted tidal connection, and altered tidal hydrodynamics.

In recent decades, the number, aerial extent, and quality of salt shrub (and salt marsh complexes) in New York has declined significantly. These losses are primarily due to invasion by common reed (Phragmites australis), dredging and filling for urban development, and to pollution, including airborne particulates, pesticides, and sewage and stormwater discharge. It is suspected that losses will continue, resulting from ongoing invasive species encroachment, shoreline development, declining water quality, and hydrologic alterations. The degradation and loss of salt shrub, which forms an upland buffer for lower elevation salt marsh communities, may have profound adverse effects on those tidal wetlands, causing increased sediment flow, altered ground water elevations and flow, loss of nutrient filtering vegetation, and loss of wildlife habitat for wetland edge species (MacDonald and Edinger 2000).

The number, aerial extent, and integrity of salt marsh complexes and associated salt shrub communities in New York are suspected to have declined substantially from their historical state. These declines are likely correlated with coastal development; dredging, ditching, and filling; and changes in hydrology, water quality, and natural processes.

Strive to minimize or eliminate hardened shorelines and maintain low-sloped shorelines within the tidal zone to increase overland sediment input. Maintain functional connectivity between the open ocean and bays with salt marsh complexes to enable full tidal flushing during each tidal cycle. For example, barriers such as railway causeways should have numerous culverts to allow sufficient hydrologic connectivity. If flow restriction devices are needed, those that are calibrated for local tidal hydrology can be used. Avoid dumping dredge spoil onto salt shrub communities. This community is best protected as part of a large salt marsh complex. Protected areas should encompass the full mosaic of low salt marsh, high salt marsh, marine intertidal mudflats, saltwater tidal creek, salt panne, and salt shrub communities to allow dynamic ecological processes (sedimentation, erosion, tidal flushing, and nutrient cycling) to continue. Connectivity to brackish and freshwater tidal communities, upland beaches and dunes, and to shallow offshore communities should be maintained. Connectivity between these habitats is important not only for nutrient flow and seed dispersal, but also for animals that move between them seasonally. Development of site conservation plans that identify wetland threats and their sources and provide management and protection recommendations would ensure their long-term viability.

Research on salt shrub should include monitoring common reed (Phragmites australis) encroachment in conjunction with indicators of community health to determine whether healthy communities are more resistant to invasion. Additional work could investigate community response to rising sea level (MacDonald and Edinger 2000).

Salt shrub communities are restricted to sheltered areas of the seacoast in the Coastal Lowlands and Manhattan Hills ecozones. Salt shrub occurs in the Peconic Bay area and along backbarrier fringe marshes located from Moriches Inlet west to Fire Island Wilderness on the south shore. It is poorly developed in mainland fringe marshes on the south shore and in all marshes along the north shore where tidal areas are steep.

This community extends from Massachusetts to South Carolina (NatureServe 2009).

A shrubland community that forms the ecotone between salt marsh and upland vegetation. Salinity levels are generally lower here than in the salt marsh (soil pore salinity ranges 7 ppt to 27 ppt) and thus technically brackish. Salt shrub areas are slightly higher in elevation than the salt marsh. Salt shrub does not usually develop on deep peat. More often, it occurs on a thin (0-10 cm) layer of peat, and soils share characteristics of both estuarine and maritime terrestrial settings. Periodic disturbance associated with storms causes die-back of shrubs. Salt shrub is usually present as a linear feature at the upper edge of a salt marsh marking the limit of the highest spring and storm tides within a given estuarine basin. In areas where the local topography is nearly level an extensive shrubland, or brackish meadow may occur. This community is often invaded by common reed (Phragmites australis).

Salt shrub forms the ecotone between salt marsh and upland vegetation. Characteristic shrubs are groundsel-tree (Baccharis halimifolia), saltmarsh-elder (Iva frutescens), and pasture rose (Rosa carolina); salt-meadow grass (Spartina patens), black-grass (Juncus gerardii), and switchgrass (Panicum virgatum) are typical herbs. Salt shrub is almost always dominated by a stunted leading edge of Iva frutescens on the marshward side of the community. Baccharis halimifolia becomes more dominant only in the older, more developed, landward side. The landward side of salt shrub is usually the most diverse.

In late summer and early fall, the two characteristic shrubs of this community, groundsel-tree and saltmarsh-elder, come into flower. 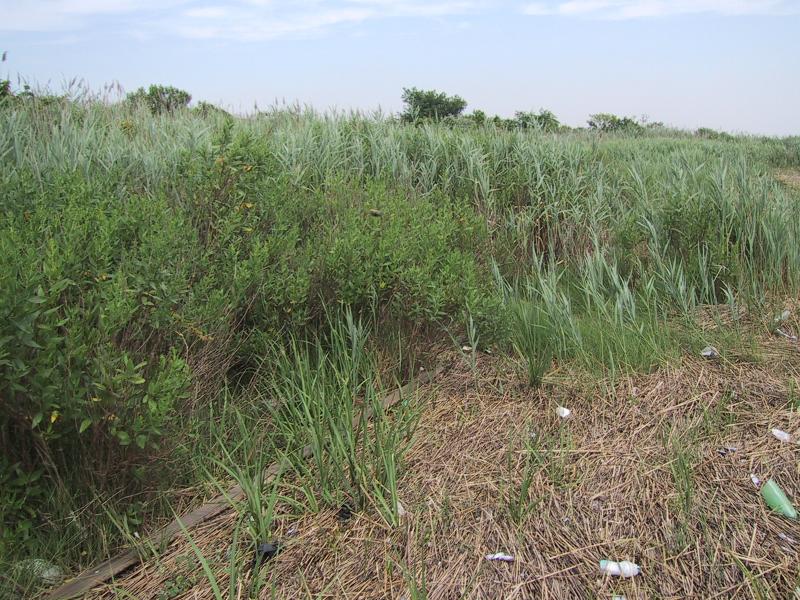 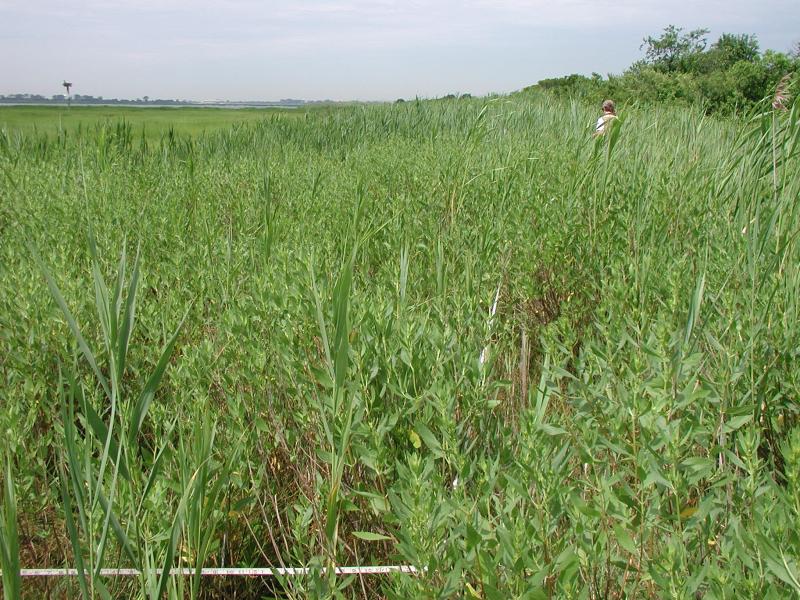 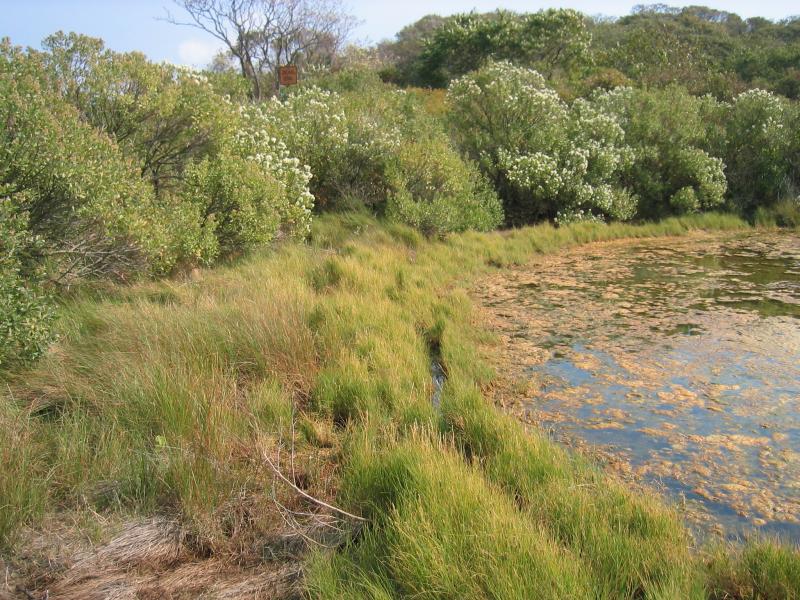 This figure helps visualize the structure and "look" or "feel" of a typical Salt Shrub. Each bar represents the amount of "coverage" for all the species growing at that height. Because layers overlap (shrubs may grow under trees, for example), the shaded regions can add up to more than 100%.