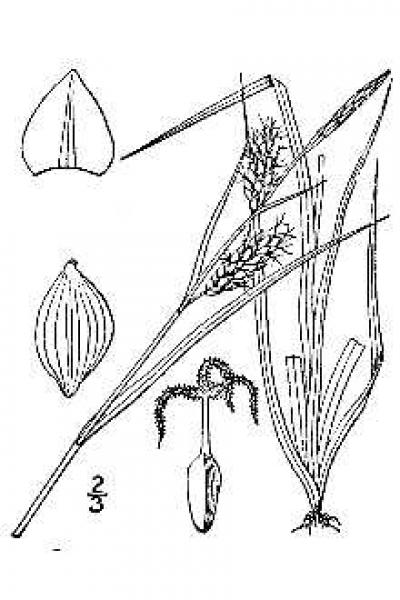 State Conservation Status Rank
SH
Historical (Possibly extirpated) in New York - Missing from New York; known only from historical records (more than 30 years ago), but still some possibility of rediscovery upon further searching.
Global Conservation Status Rank
G4G5
Apparently or Demonstrably Secure globally - Uncommon to common in the world, but not rare; usually widespread, but may be rare in some parts of its range; possibly some cause for long-term concern due to declines or other factors. More information is needed to assign either G4 or G5.

Carex meadii is named for its discoverer Samuel Barnum Mead who lived from 1799-1880.

There are no known populations within New York, but we do have five historical sites. This plant was last seen here in 1924.

This species has not been seen in New York since probably 1924, so no short term trends are known.

Two of the five known sites from the state are at locales where the habitat has been destroyed by urban development. The species has also not been seen in the state since probably 1924. At the same time, relocation of historical populations is hindered by locale information being imprecise and obscure.

As this species is known to be very similar to Carex tetanica as well as some other species, all New York specimens of this sedge should be verified.

This sedge is known historically from five sites in New York from western New York to central and southern New York.

Carex meadii is a grass-like plant that has widely scattered shoots arising from long deep rhizomes. The leaf blades are gray-green, 7-15 cm long, and 2-7 mm wide. The fruiting stems are 15-60 cm tall. Flowers are clustered into 2-4 elongated spikes along the upper part of the stem.

This sedge is colonial with long deep rhizomes. The shoots which arise from the rhizomes are widely scattered. The culms have brown proximal sheaths with blades. The inflorescence is 4-25 cm long and 1-1.6 times as long as the proximal bract. It is composed of one terminal staminate spike and 1-3 lateral pistillate spikes. The perigynia are densely arranged on the pistillate spikes, minutely papillose, and have a minute bent beak. This species approaches C. tetanica and can look fairly similar.

Vegetatively, this species is inconspicuous. Due to this and because of the very similar C. tetanica the best time for identification is when the species is in fruit.

Carex woodii which is also closely related can be distinguished by its bladeless, purple tinged basal sheaths as well as its superficial rhizomes.

Carex crawei (section Granulares) is also superficially similar, although more distantly related, and can grow in similar habitats as C. meadii. Carex meadii differs in having pistillate spikes on longer peduncles which are mostly along the upper half of the culm; leaf sheaths concave at the tips; perigynia pale greenish to greenish white with more strongly raised nerves and a curved beak; and perigynia never with small yellowish resin glands which are sometimes present in C. crawei (Yatskievych 1999).

In New York, Carex meadii is in fruit in June and this is when surveys should occur.

The time of year you would expect to find Mead's Sedge fruiting in New York. 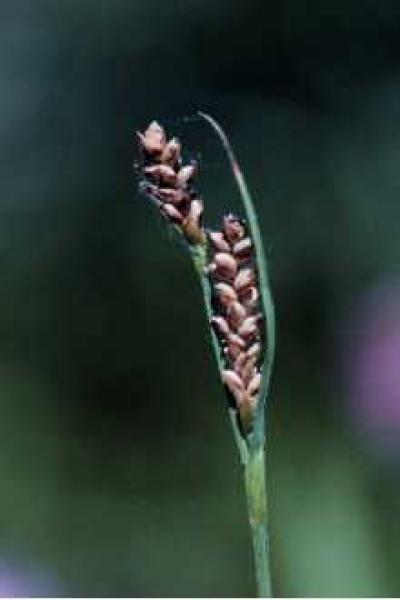 Carex meadii is in section Paniceae. It is known to be difficult to distinguish from C. tetanica in parts of its range although various authors (Mackenzie 1910, Fernald 1970, Gleason and Cronquist 1991, Rothrock and Reznicek in Flora of North America 2002) believe it is or maintain it as a distinct species. Perhaps further work with this species and section Paniceae in general, will reveal new information.