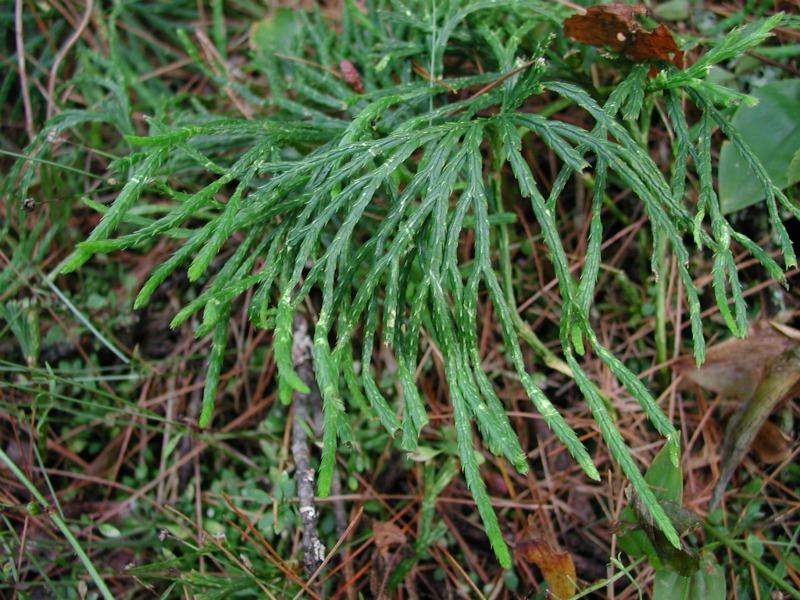 Diphasiastrum species are part of a family of plants known as clubmosses. These "primitive" plants are living relics of some of the earliest vascular plants. There are abundant fossils of tree-sized clubmosses, sometimes depicted in displays of dinosaurs. Such specimens are closely related to the smaller clubmosses still found today (Wikipedia, accessed 5/20/2008.) The common name Northern Running-pine refers to the underground stems or "runners" which connect many plants. It is also known as Christmas Green, because it stays green throughout the year, and Ground-cedar, presumably because its appressed stems resemble the branchlets of Northern White-cedar (Thuja occidentalis).

There are 9 existing occurrences, with 3 of those are ranked better than "fair". The 8 historical occurrences date mostly from the 1940s and 1950s.

Most of the verified sites have only been visited once, so additional work is needed to determine the trends for these populations.

There are about the same number of historical and extant occurrences, and two verified populations have apparently persisted for at least 60 yrs. This species may have always been rare in the state, where it is at the southern edge of its range.

Powerline maintenance and pollution are potential threats at two of the verified sites in the state. Succession and subsequent shading out of the population may be a long-term threat to many populations.

In New York this species has been found in a variety of habitats, generally in openings of some kind, including dry rocky ridgetops, powerlines, open summits and along trails through mountain spruce-fir forest in the Adirondacks, and white pine and hemlock-northern hardwood forests (New York Natural Heritage Program 2008). Dry upland forests with acidic soils (Haines and Vining 1998). Dry open coniferous or mixed forest alpine slopes (Flora of North America 1993). Woods and rocky slopes (Gleason and Cronquist 1991). Dry woods, thickets and clearings (Fernald 1970).

This species is known from the northeastern Adirondacks, the Tug Hill Plateau, and Finger Lakes regions in northern New York, and Ulster and Sullivan counties to the south.

Northern Running-pine is a circumboreal species, ranging throughout much of Canada and extending south into the U.S. in the Pacific Northwest, the Upper Great Lakes, and northern New York and New England.

Northern Running-pine is a perennial, evergreen plant which spreads by horizontal stems 1.1 to 2.2mm wide, prostate on the ground or buried under leaf litter. The upright shoots grow 8 to 44 cm tall, and are branched irregularly up to 5 times. They have a distinct "unkempt" look to them instead of forming neatly arranged tiers. The leaves are 1.4 to 4 mm long by .5 to 1.2 mm wide, appressed, and narrowly lance-shaped with acute tips. The leaves are arranged into 4 ranks, forming flattened "branchlets" 1.8 to 4 mm wide, with regular bud constrictions representing the extent of the annual growth. The uppersides of the branchlets are green and faintly shiny, the undersides pale and dull. Diphasiastrum and its relatives produce spores rather than seeds. In D. complanatum, these are borne on 1-2 stalked strobili per shoot, each strobilus 8.3 to 32 mm long by 2-3 mm wide, with a blunt apex.

Individuals with strobili are best for identification, but shoots with leaves only may also be identified.

Diphasiastrum digitatum does not have branches with annual constrictions, and the branches are organized into distinct tiers. Diphasiastrum tristachyum does have annual constrictions, but has narrower (1.2 to 2.0 mm) branches that are blue-green (especially beneath), and peduncles each with 3-4 strobili. D. complanatum has branches 2 to 3 mm wide and not in distinct tiers, 1-2 strobili per peduncle, and a shiny green color.

Vegetative plants may be found year-round when they are not covered by snow but are most visible late April through November. Spore-bearing plants can be found during the summer months.

The time of year you would expect to find Northern Ground Cedar vegetative and fruiting in New York. 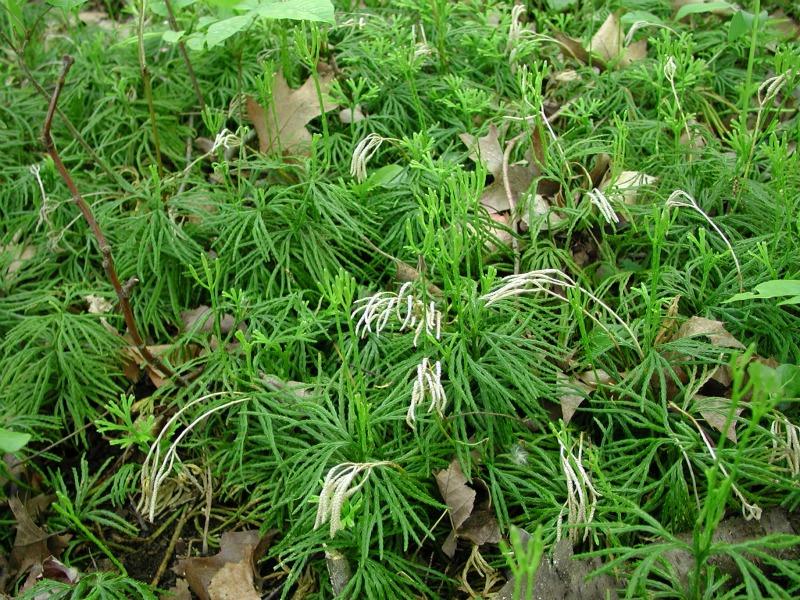 Diphasiastrum was formerly considered part of the genus Lycopodium, and this species may be found under the name Lycopodium complanatum in some guides. Lycopodium digitatum, formerly known as L. complanatum var. flabelliforme, often appears in old plant lists as simply L. complanatum.

Information for this guide was last updated on: October 22, 2020