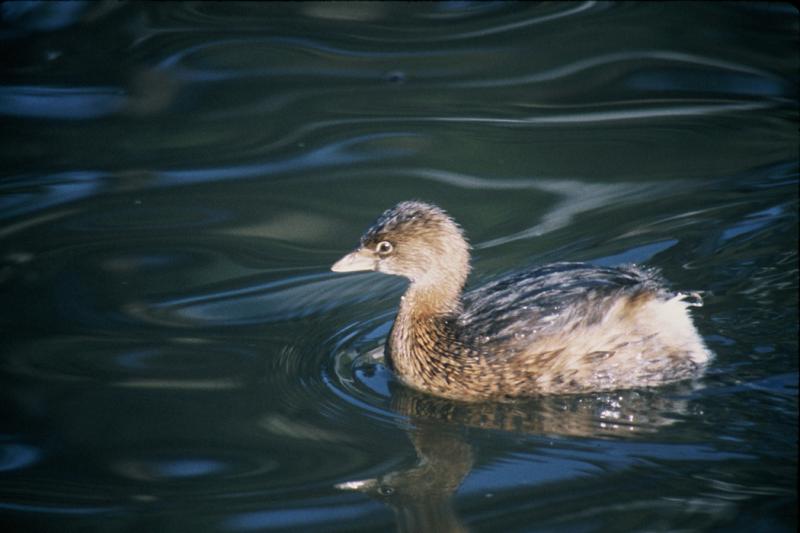 State Conservation Status Rank
S3B,S1N
Breeding populations Vulnerable in New York - A migratory animal vulnerable to disappearing as a breeder from New York due to rarity or other factors (but not currently imperiled); typically 21 to 80 breeding populations or locations in New York, few individuals, restricted range, few remaining acres (or miles of stream), and/or recent and widespread declines. Nonbreeding (wintering) populations are critically imperiled in New York.
Global Conservation Status Rank
G5
Secure globally - Common in the world; widespread and abundant (but may be rare in some parts of its range).

Both sexes build a large sodden, floating nest of rotting and green plant material and mud. The decomposition of plant material generates substantial quantities of heat, up to 11-13C higher than the surrounding water, providing enough heat to incubate the eggs in the adults' absence (Davis et al. 1984). Like other grebe species (Nuechterlein and Buitron 2002) this may afford the adults the ability to roost comunally at night to minimize predation risk.

The Pied-billed Grebe was recorded as a probable or confirmed breeder in 150 Breeding Bird Atlas Blocks during the second New York State Breeding Bird Atlas (2000-2005), and as a possible breeder in an additional 115 blocks. Overall, the species is considered a rare to uncommon, local breeding species with many of the records clustered in areas of large wetland complexes. Although it was recorded in significantly more blocks during the Atlas 2000 project in comparison with the first New York State Breeding Bird Atlas in the mid-1980s, Breeding Bird Survey records indicate a - 2.0% annual trend between 1980 and 2002 (New York State Department of Environmental Conservation 2006) and the species is state listed as threatened. Loss of wetlands and other factors continue to pose threats to the species although a number of high quality sites are on protected state and federal wetland complexes.

Although Breeding Bird Survey data for 12 survey routes in New York between 1966-1989 showed a non-significant 0.6% decrease in abundance (Gibbs and Melvin 1992) another analysis shows a - 2.0 % annual trend from 1980-2002 (New York State Department of Environmental Conservation 2006). An increase in the number of Breeding Bird Atlas blocks where the species was either a probable or confirmed breeder from the first Atlas to the second (86 to 184) Atlas could reflect population increases, range expansion, or increased surveys efforts for marshbird species.

There is little data on which to base a long-term trend. However, considering the massive loss of wetlands in New York State over the past 100 years, it seems that pre-European population sizes must have been substantially higher. Heavy historical exploitation by humans, namely shooting for feathers and egg collecting, have abated since the turn of the 20th century. In the late 1800s large numbers were shot and sold to milliners and furriers who fashioned ear-muffs and hat ornaments from the silver-white breast and abdomen feathers (Bent 1919).

Currently, the greatest threat to this species is the ongoing alteration and loss of wetlands through draining, dredging, filling, pollution, invasive species and siltation from agricultural practices and roads. These threats lead to the degradation, isolation, and fragmentation of wetlands and have left many marshes that were too small, or were not part of larger marsh complexes, unsuitable for grebes and other marshbirds (New York State Department of Environmental Conservation 2006). Pollution and environmental contamination degrades the food web of wetland ecosystems and can impair the reproductive capacity of pied-billed grebes through the process of biomagnification. Popular organophosphate pesticides used heavily for agriculture have been directly implicated in the death of this species and elevated mercury levels have been detected in some individuals (Gibbs and Melvin 1992). Siltation and runoff from development and agriculture may also negatively impact populations of important prey species. Water level management on Lake Ontario and other large water bodies can alter marsh habitat and decrease the quality of historically utilized sites. In other cases, lack of stochastic events that produce a flushing effect may negatively impact marshbirds by promoting large monotypic stands of emergent vegetation. Invasive aquatic plants, such as purple loosestrife, crowd out native emergents and form stands too dense and lacking sufficient open water interspersion for some marshbird species, including pied-billed grebes. Small, localized breeding populations are extremely vulnerable to stochastic events, such as storms, habitat loss, or human disturbance. (New York State Department of Environmental Conservation 2006). Grebes are sometimes mistaken for ducks by hunters and are accidentally shot. Television and cell towers pose an extreme danger to nocturnally migrating individuals, for example 65 pied-billed grebes died at a television tower in Florida between 1955 to 1980 (Muller and Storer 1999).

Restoration of wetland habitat, improvement of water level control at managed wetlands, promotion of the Farm Bill Landowner Incentive Program to manage and restore appropriate habitat, reducing the spread of invasive exotic species, and controlling invasive species where they occur at sites occupied by grebes and other rare marshbirds, are all identified as important management actions beneficial to Pied-billed Grebe (New York State Department of Environmental Conservation 2006). Pied-billed grebes will readily colonize wetland impoundments managed primarily for waterfowl, ample opportunity to make minor alterations to existing management schemes to improve nesting and foraging habitat for grebes exist. Since other secretive, rare marshbird species such as American Bittern, Least Bitterns, and Black Terns share habitat preferences with Pied-billed Grebes, management strategies could benefit multiple species of management concern.
The conservation of relatively large (5-75 ha) wetlands with roughly a 50/50 interspersion of moderately shallow emergent vegetation and open water (the "hemi-marsh") is the most urgent management need for Pied-billed Grebes and other marsh-nesting birds. Dense stands of vegetation therefore need to be periodically opened up to retard succession. Properly managed muskrat populations often fulfill this role, but the process may need to be augmented by cutting, burning, or flooding. Herbicide treatments are not recommended. Manipulation of water levels provides a cost-effective method for establishing moderately dense stands of emergent vegetation while retaining open water areas preferred by Grebes. However, water levels need to be maintained at a stable level during the nesting season to prevent flooding of nests and predator access. Complete drawdown should be avoided so as not to destroy major fish and odonate food items. The floating nests of Grebes are easily washed over and capsized by wave action, so large motorized boats should be excluded from occupied marshes, and nesting areas should be protected from heavy recreational use to prevent disturbance of incubating birds (Gibbs and Melvin 1992). High reproductive potential (large clutch size, ability to re-nest following nest loss), in addition to its tolerance of a wide range of freshwater marsh habitats, suggests that management potential is high for this species.

As a breeding species, the pied-billed grebe occurs statewide, with concentrations on the Lake Ontario Plain and St. Lawrence Valley. It is more sparsely distributed in the Adirondacks, Catskills, Allegheny uplands, and on Long Island. It is a rare but regular winter visitor, more common on the coast, but also lingering fairly regularly in open water areas on the Allegany and Oswego Rivers, and at Dunkirk Harbor in Chautauqua County (Levine 1998).

Pied-billed grebes are small, stocky, poorly buoyant waterbirds, about 31-38 cm in length, with small, narrow wings, and feet placed far back, with a blunt-ended posterior. During the non-breeding period, the bill is unmarked, the throat is white, and the white rear becomes more conspicuous. As adults, the sexes are alike, whereas juveniles are distinguished by the lack of a white orbital ring, an unmarked bill, darker brown sides of the head and neck, and a whiter underbelly (Palmer 1962). Downy chicks have a zebra-like pattern of black and white stripes, interspersed with reddish-brown spots (Palmer 1962). VOCALIZATIONS: Territorial males have a distinctive prolonged call, a loud "cow-cow-cow-cow-cow- cowp...cowp...cowp...". Several other calls are also produced during the breeding season, but during the non-breeding season they are mostly silent. NEST: Grebes build sodden, floating nests of rotting and green plant material and mud averaging 38 cm in diameter (Glover 1953), often anchored to growing emergent plants. EGGS: Elliptical to subelliptical, approximately 44 x 30 mm, smooth and nonglossy (Harrison 1978). Although white or tinted bluish when laid, the eggs gather a heavy, brown stain from the wet, organic matter in the nest.

Mature adults are easiest to identify and the sexes are similar. However, the downy chicks of Pied-billed Grebes have a striking, zebra-like pattern of black and white stripes, interspersed with reddish-brown spots, that makes them readily identifiable as well.

Grebes are very secretive birds that will slowly submerge underwater with only their eyes and nostrils showing in order to escape danger. Downy chicks ride on the adults back, even when they dive underwater. Adults consume their own feathers and also feed them to young, presumably to protect the stomach and trap fish bones. Hard indigestible items are felted together with feathers and regurgitated as pellets. Grebes migrate nocturnally, landing before dawn at the nearest waterbody and are more social outside the breeding season. During breeding, Pied-billed Grebes are an aggressive, highly territorial bird, threatening, chasing and attacking conspecifics and other species. They are reluctant to take flight, needing a long running start across open water to become airborne. Seasonally monogamous, both sexes build the nest and add plant material and mud as the season progresses and the nest slowly sinks. Air-pockets and trapped gases generated by the fermenting and rotting vegetation give buoyancy to the nest. The floating, rotting nest generates substantial quantities of heat (Davis et al. 1985) and may allow the adults to abandon the nest at night to avoid predation risk (Nuechterlein and Buitron 2002). The young are precocial, making their first successful catches of food (fish, insects) at 10-12 days post-hatching and they are capable of flight only 35 days after hatching.

Pied- billed Grebes are opportunistic carnivores, the diet being dominated by crayfish (31% by volume), insects (46%), primarily Odonates (dragonflies), Heteroptera (true bugs), Coleoptera (beetles) and fish (24%), including catfish, eels, perch, sunfish, suckers, carp, sciulpins, killifish, sticklebacks, and minnows. There is a strong seasonal shift in the diet, fish being most important during the nonbreeding season, while dragonfly nymphs constituted 34% of the diet in late summer and are an important food item for chicks (Muller and Storer 1999). The diet also includes smaller amounts of snails, small frogs, tadpoles, aquatic worms and leeches. In wetlands where fish are not prevalent, Ambystomatid salamander adults and larvae play a key role in the diet (Osnas 2003).

In New York, the Pied-billed Grebe is a rare to uncommon local breeder; a fairly common migrant, more numerous in the fall; and a rare but regular winter visitant (Levine 1998). Migratory Grebes usually arrive on the nesting grounds by early March, shortly after ice out, and courtship commences in early April with nesting activity initiated by mid-April. The peak vocalization period for pied-billed grebes at study sites in western New York was from late-April through mid-May with breeding activity vocalizations dropping off through June (Lor and Maleki 2002).

The time of year you would expect to find Pied-billed Grebe active and reproducing in New York.

Grebes are a family of diving birds with no living relatives. They may have once been related to Loons (Cotter and Spencer 1996).