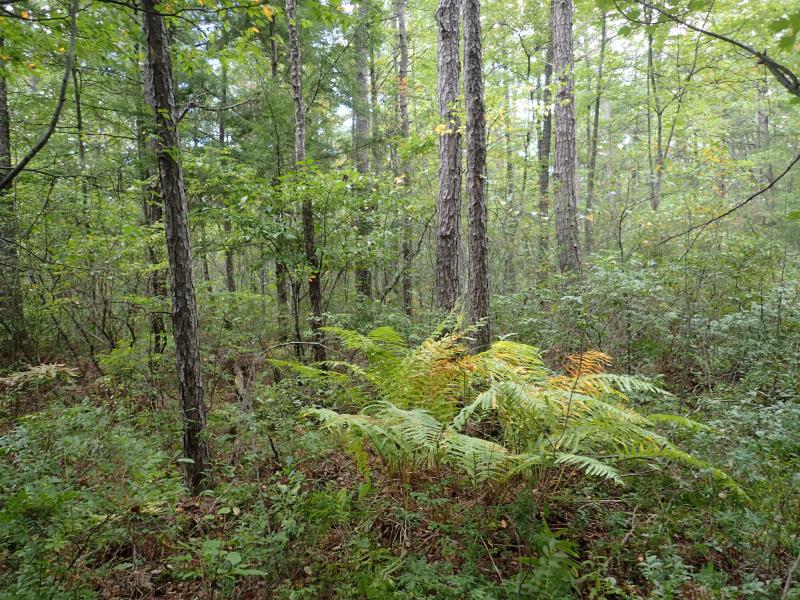 Highbush blueberry dominates the shrub layer in pitch pine-blueberry peat swamps. Blueberries are the most widely grown fruit crop in the U.S. Conventionally grown blueberries use a variety of pesticides that may be toxic to wetland plants and animals, especially considering that blueberry fields lay close to the water table and pesticides are easily transported through surface and groundwater flows from fields to nearby wetlands. Blueberries actually have a relatively low nitrogen requirement and thrive on organic fertilizers. Organic blueberry farming is growing in response to a high demand for organic fruits.

There are very few occurrences of pitch pine-blueberry peat swamps statewide. Very few documented occurrences have good viability and very few are protected on public land or private conservation land. This community has limited statewide distribution and tends to be embedded within barrens or rocky summits that depend on fire to maintain pitch pine and heath shrubs. The current trend of this community is probably stable for occurrences on conservation land, or declining slightly elsewhere due to moderate threats related to development pressure, alteration to the natural hydrology, and fire suppression. This community has declined moderately from historical numbers likely correlated with mining, logging, and development of the surrounding landscape.

The numbers and acreage of pitch pine-blueberry peat swamps in New York have probably remained stable in recent decades as a result of wetland protection regulations.

The numbers and acreage of pitch pine-blueberry peat swamps in New York have probably declined moderately from historical numbers likely correlated with logging, fire suppression, and development of the surrounding landscape.

Pitch pine-blueberry peat swamps are threatened by development and its associated run-off (e.g., residential, roads), recreational overuse (e.g., ATVs, hiking trails causing peat compaction), and habitat alteration in the adjacent landscape (e.g., excessive logging, pollution, nutrient loading). Alteration to the natural hydrology is also a threat to this community (e.g., flooding or draining). Since pitch pine-blueberry peat swamps are embedded within barrens or rocky summits, fire suppression may be an additional threat to this community. Although invasive species are currently not a threat to pitch pine-blueberry peat swamps, reedgrass (Phragmites australis ssp. australis) and purple loosestrife (Lythrum salicaria) may become a problem in the future. Southern pine beetle (Dendroctonus frontalis) is a bark beetle that infests pine trees, such as pitch pine, white pine, and red pine. Southern pine beetle is native to the southeastern United States, but its range has spread up the east coast to Long Island, New York in 2014. Natural communities dominated or co-dominated by pines would likely be most impacted by southern pine beetle invasion.

Because pitch pine-blueberry peat swamps are naturally acidic and low in nutrients, they are particularly susceptible to alteration by elevated nutrient inputs. Peat swamps may require larger buffers than other wetland types because of their high susceptibility to changes in nutrient concentrations.

Where practical, establish and maintain a natural wetland buffer to reduce storm-water, pollution, and nutrient run-off, while simultaneously capturing sediments before they reach the swamp. Buffer width should take into account the erodibility of the surrounding soils, slope steepness, and current land use. Wetlands protected under Article 24 are known as New York State "regulated" wetlands. The regulated area includes the wetlands themselves, as well as a protective buffer or "adjacent area" extending 100 feet landward of the wetland boundary (NYS DEC 1995). If possible, minimize the number and size of impervious surfaces in the surrounding landscape. Avoid habitat alteration within the wetland and surrounding landscape. For example, roads and trails should be routed around wetlands, and ideally not pass through the buffer area. If the wetland must be crossed, then bridges and boardwalks are preferred over filling. Restore pitch pine-blueberry peat swamps that have been unnaturally disturbed (e.g., remove obsolete impoundments and ditches in order to restore the natural hydrology). Prevent the spread of invasive exotic species into the wetland through appropriate direct management, and by minimizing potential dispersal corridors, such as roads.

Survey for occurrences statewide to advance documentation and classification of peatlands. A statewide review of the acidic peatlands including pitch pine-blueberry peat swamp is desirable.

The range of this community is uncertain. It is currently known from the Erie-Ontario plain in Oneida County and the Shawangunk Hills in the Hudson Valley in Ulster County. The historical range of this community is unknown. Examples of pitch pine-blueberry peat swamp were sought, but not found on Long Island (MacDonald and Edinger 2000). Communities with similar composition called "pitch pine lowlands" have been described from the New Jersey Pine Barrens (Robichaud and Anderson 1994, Breden et al. 2001).

Pitch pine-blueberry peat swamps as described by NY Natural Heritage appear to be restricted to the Rome Sand Plains in central New York and the Northern Shawangunk Mountains in eastern New York.

An open-canopy conifer swamp of sand plains regions, occurring on peat over sandy substrate. Pitch pine is a major canopy component, accompanied by gray birch and red maple. A dense tall shrub layer is present in the understory, dominated by highbush blueberry. Other tall and short shrubs are often present, including any of several ericaceous species.

Known examples of this community have been found at elevations between 450 feet and 2,200 feet.

During midsummer, highbush blueberries come into fruit, and during the fall, the blueberry bushes turn dark red, creating an attractive contrast to the green of the pitch pines. 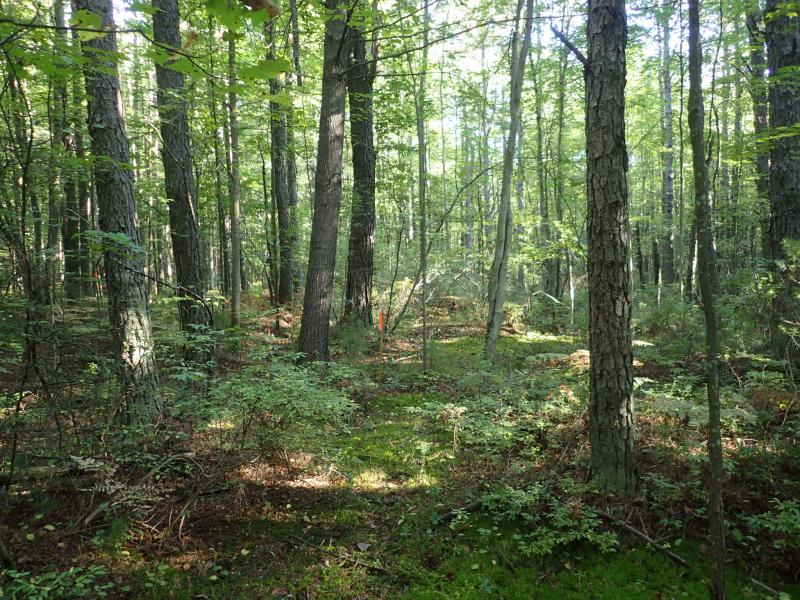 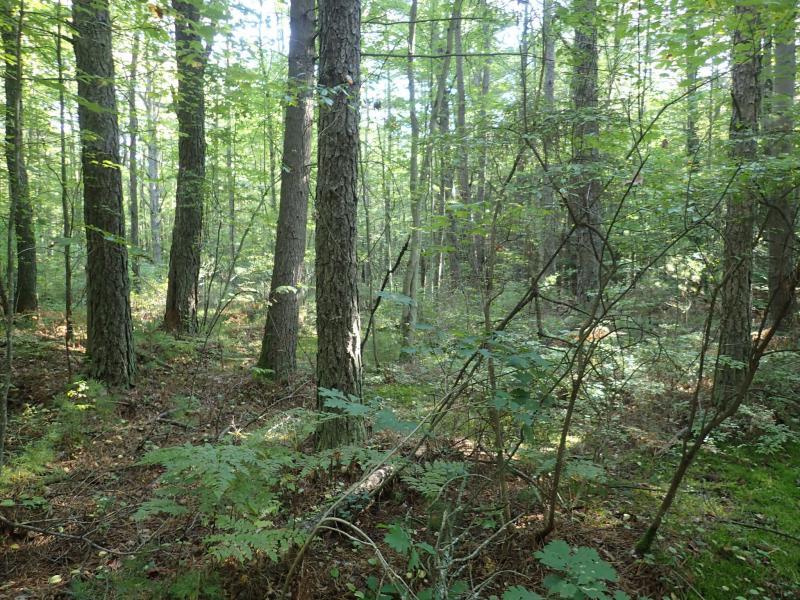 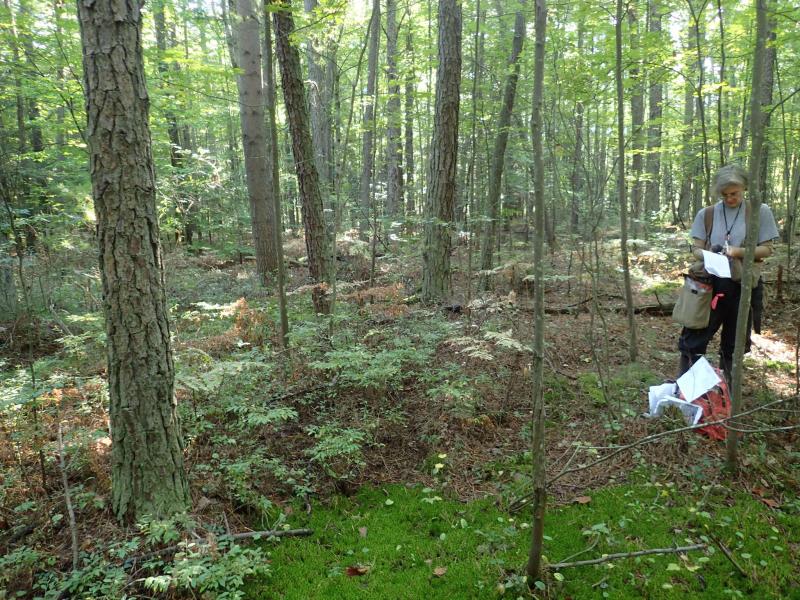 This figure helps visualize the structure and "look" or "feel" of a typical Pitch Pine-Blueberry Peat Swamp. Each bar represents the amount of "coverage" for all the species growing at that height. Because layers overlap (shrubs may grow under trees, for example), the shaded regions can add up to more than 100%.