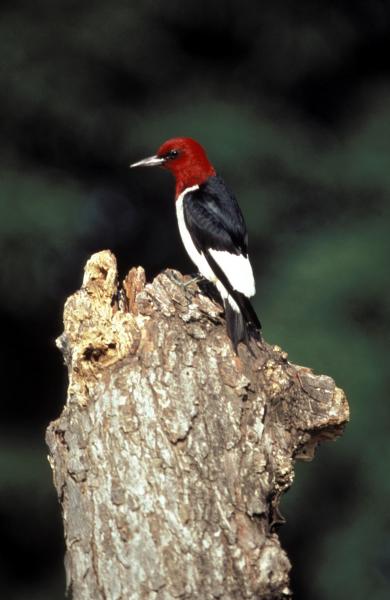 State Conservation Status Rank
S2?B
Imperiled in New York (most likely) - Conservation status is uncertain, but most likely very vulnerable to disappearing from New York due to rarity or other factors; typically 6 to 20 populations or locations in New York, very few individuals, very restricted range, few remaining acres (or miles of stream), and/or steep declines. More information is needed to assign a firm conservation status. (A migratory animal which occurs in New York only during the breeding season.)
Global Conservation Status Rank
G5
Secure globally - Common in the world; widespread and abundant (but may be rare in some parts of its range).

Red-headed woodpeckers are one of the few woodpecker species that cache food (store it hidden from sight). They are known to store seeds, nuts, and insects. Live grasshoppers are wedged into tight crevices so they cannot escape (Cornell 2016).

The red-headed woodpecker has experienced a substantial decline in the last 30 years, as shown by the 2000-2005 Breeding Bird Atlas. The species was noted as confirmed or probable breeding in only 95 Atlas blocks (McGowan and Corwin 2008). Specific causes for the decline are unknown.

The red-headed woodpecker experienced a 76% decline in Breeding Bird Atlas blocks between the 1980-1985 and 2000-2005 periods (Andrle and Carroll 1988, McGowan and Corwin 2008) . Whether this decline represents a similar decline in population size is unknown, although it is likely.

The reasons for the population decline remain unknown, but there are a number of potential threats. European starlings may be outcompeting red-headed woodpeckers for nest cavities. Loss of agricultural lands may have resulted in the loss of suitable breeding habitat in some areas. There has also been a reduction of mast producing trees with drastic population declines of some species. For example, American chestnut and American elm populations have been nearly eliminated by chestnut blight and Dutch elm disease, respectively. Land management practices that include removal of dead trees reduces suitable nest sites. Car collisions are also possible, especially when nest sites are close to roads (Cornell Unviersity 2016).

Land management practices should allow trees to mature and dead limbs and trees should remain when possible to help preserve potential nest trees. Some open areas are desirable for foraging.

Reasons for recent population declines remain unclear, but declines appear to be range-wide. Research is needed to determine decline causes that test current theories such as declines in food supply, habitat loss, and competition with other cavity-nesting species.

The range covers all of New York. They are rarely found in the central Adirondacks, Catskills, and downstate urban areas (Levine 1998, McGowan and Corwin 2008).

Melanerpes erythrocephalus is a medium-sized woodpecker with a rounded head, spike-like bill, and a short tail. Adults have a scarlet red head and neck, white underparts, black back, and large white patches on their wings and rump. The white wing patches makes the bird's lower back appear white when it's perched. Immatures have similar marking as adults. Wing patches are white, but there are rows of black spots near the trailing edge. The head is brown or gray-brown instead of red. The flight pattern is similar to blue jay. Nests are typically placed in dead trees or dead parts of live trees. Females lay 3-10 pure white eggs.

This is the only North American woodpecker with an entirely red head and neck.

Adults are the easiest to identify.

Red-headed woodpeckers forage for food in a similar manner to other woodpeckers: by hammering at wood with their bill. They also catch insects in flight and on the ground (Cornell University 2016). Food is sometimes cached, including live grasshoppers that are wedged into crevices (Cornell University 2016). Their territorial behavior includes aggression toward other birds that includes removing eggs and nests.

Red-headed woodpecker diet includes insects (approximately 1/3) and plants (2/3). They eat a variety of insects, such as beetles, cicadas, grasshoppers, midges, and honeybees. Plant food includes nuts, seeds, berries, and corn. Nests of other birds are sometimes raided with eggs or nestlings consumed.

The best time to observe red-headed woodpeckers in New York is during the breeding season from May to August.

The time of year you would expect to find Red-headed Woodpecker active and reproducing in New York.

Information for this guide was last updated on: March 31, 2016