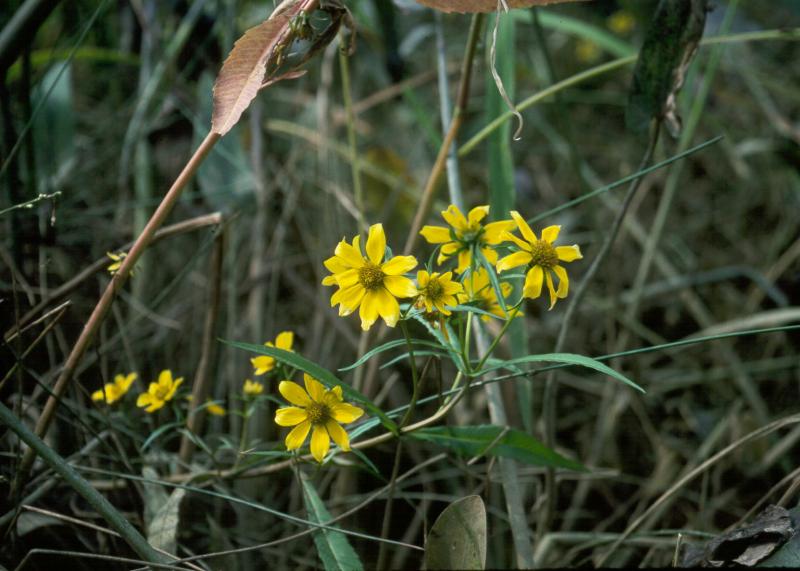 What has been called Bidens laevis along the Hudson River may in fact be a variation of another species since the characters of these plants do not quite match those of the typical Bidens laevis. More work is needed on identification of these specimens. Specimens from wetlands in the rest of the state are a good match for this plant. The species name laevis refers to the smooth stems.

The long-term trend of this species in New York is difficult to assess because plants in the marshes of central and western New York as well as Long Island may be different from the plants in the marshes of the Hudson River that have all been called Bidens laevis. The historical records from Long Island are from areas that have been highly developed and probably no longer exist. Some historical records from Hudson River marshes have been rediscovered and new populations also have been found. This area has probably seen a large fluctuation in the number of populations over the last 100 years but they seem to be doing fairly well recently. There has not been a recent targeted work to rediscover historical populations in the marshes of Central and Western New York so long-term trends here are unknown. In general marsh land has decreased in this area of the state and so may have these populations.

Habitat conversion has severely threatened historical records on Long Island and the Lower Hudson area and phragmites threatens some of the populations in the Hudson River tidal marshes. It is unknown what threatens populations in Central and Western New York if these populations still exist.

Hudson River sites should be protected from overuse by recreational boaters and by invasion of phragmites.

Identification and taxonomic studies need to be done to find out if Long Island and Hudson River plants are different from Central and Western New York plants. Results will have a major impact on the protection of the species.

This species occurs on Long Island and along the Hudson River, and at scattered locations throughout much of the state, but not in Northern New York.

This species occurs only in the United States, including most states east of the Mississippi, extending through the lower Mississippi Valley west to include include Texas, the Southwest, and California.

Smooth Bur-marigold is an annual, opposite-leaved herb. It has sessile leaves, and is entirely glabrous. The flower-like heads are actually composed of many disc and ray flowers, the petal-like rays being yellow and about 1.5 to 3 cm long. The receptacular bracts (the chaff) are tipped with red. The disk flowers' corollas are mostly 5-lobed.

Flowering plants, preferably with portions in fruit as well, are best for positive identification.

Bidens cernua has a stem that is soft and usually hairy. The outer involucre is longer than the inner, and the chaff is yellow-tipped. Bidens bidentoides and B. hyperborea var. hyperborea both have petiolate leaves, lack ray flowers, and have 4-lobed disc flower corollas.

Smooth Bur-marigold flowers from mid-August through September, the fruits persist into October.

The time of year you would expect to find Smooth Beggar Ticks flowering and fruiting in New York.