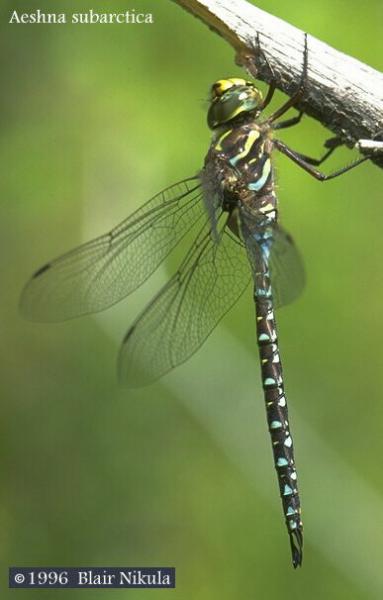 The Subarctic Darner is primarily a European and Canadian species. Until the mid 1990s it was known from only three localities in the United States, including one site in the southern tier of New York State (Donnelly 1992)

At present, there two known extant populations of the Subarctic Darner in sphagnum bogs in the Adirondacks. There was an additional disjunct population on the southern tier known from the 1970s. However, they have not been documented there since 2009 despite repeated searching. There are likely additional undiscovered populations in the Adirondacks and perhaps elsewhere in the state where bogs are found. However, this is primarily a species of Canada and northern Europe, is considered rare in most of the northern states where it occurs, and is not expected to be found in a large number of locations in New York.

There is no estimate of population size for this species based on statewide occurrences, but they are currently known from three locations, two recently documented for the first time. Any new location information on the species in New York may be reflective of heightened interest in surveying for this species rather than a population increase or a range expansion (Holst 2005). The site known since the 1970s may no longer have Subarctic Darner present (New York Natural Heritage Program 2020). There are likely additional undiscovered populations in the Adirondacks and perhaps elsewhere in the state where bogs are found. However, this is primarily a species of Canada and northern Europe, is considered rare in most of the northern states where it occurs, and is not expected to be found in a large number of locations in New York.

There is no information on long-term trend in New York, as the most recent population was documented in 1973.

There are no obvious threats to the habitat that supports populations in New York although there may well be threats to other, as yet unidentified, populations. The Chenango County population is isolated, so is likely a sink population. Little published information is available citing specific cases of negative impacts to bog and fen odonates, but any activities which degrade the sensitive hydrology of these habitats would threaten populations of this species. Examples include peat mining, ditching, filling, eutrophication, direct effects of pesticides (e.g. for mosquito control or from agricultural runoff), and increases in the sediment load of the wetland (such as might result from agricultural runoff or removal of vegetation from the adjacent uplands). Succession could also threaten some sites as shallow pools fill in with vegetation over time. Removal of large areas of forest or shrub habitats adjacent to occupied wetlands could also threaten populations as these adjacent habitats are important for recently emerged adults until they reach maturity. Temperature extremes, droughts, and habitat shifting and alteration as a result of climate change is expected to affect boreal bog odonates.

Research aimed at obtaining information on population size at occupied sites would be useful in determining the overall population for this species in the state.

The habitat for this species has been described as muskeg ponds, bogs, and northern swamps (Mead 2003), whereas Nikula et al. (2003) describe the habitat in Massachusetts as sphagnum bogs and deep fens with wet sphagnum. The locations for this species in New York include areas of black spruce-tamarack bog, highbush blueberry bog thicket, and inland poor fen.

There are two known extant populations of the Subarctic Darner in sphagnum bogs in the Adirondacks. There was an additional disjunct population in Chenango County known from the 1970s. However, they have not been documented there since 2009 despite repeated searching since then. There are undoubtedly undocumented populations present in the Adirondacks, but it is less certain that other populations exist outside this region as the species habitat (sphagnum bogs) is much less common in other parts of the state.

The Subarctic Darner is a circumpolar species of northern latitudes. Its principal range extends from Canada to northcentral Europe and across Siberia to Japan (Mead 2003). In Canada, it is found from the Yukon, Northwest Territories and western provinces eastward to Ontario, Quebec, and the Atlantic provinces. In addition to Alaska, this darner has been found in a number of northern states including Maine, Massachusetts, New Hampshire, New Jersey, New York, Minnesota, Wisconsin, Montana, Oregon, Vermont, and Washington (Needham et al. 2000).

Like other blue or mosaic darners (genus Aeshna), adult Subarctic Darners are large dragonflies with large eyes, a brown thorax with two blue-green stripes on the front and two on the side, and a long slender brown abdomen marked by two rows of sky blue spots. Adult Subarctic Darners average approximately 2.8 inches (7.1 cm) in length. The face is yellow with an obvious black line across the middle and a black "T-spot" above the face. The eyes are blue-gray to greenish. The two stripes on the side of the thorax (the lateral stripes) are bent at the midpoint and tend to be blue or blue-green in the upper portion and yellow or greenish in the lower portion. The forward-most stripe has a long, thin blue "flag" at the top which extends toward the rear. Typically, there are two, nearly connected, very thin yellow to blue lateral spots located between the two lateral thoracic stripes. The wings are usually clear, but are occasionally tinted with amber in females. Some females have green or yellow abdominal spots or thoracic stripes in places where these colors are blue in males.The larvae are elongate, cylindrical shaped aquatic insects that are usually patterned in drab brown and greenish colors and climb and crawl among aquatic vegetation. The antennae are composed of six or seven, small slender segments. Body length is approximately 1.57-1.65 inches (40-42 mm) at maturity (Walker 1958) which may be at 1-3 years.

Close examination of the thoracic and abdominal pattern and terminal appendages is necessary for positive identification.

Adults may be found hunting in open areas away from the breeding habitat. At the bogs and fens where this species breeds the males may be seen flying low over wet areas and pools patrolling a territory, chasing other males, and searching for females. Females lay their eggs in patches of sphagnum "soup" in pools of shallow water within the bogs.

Flight dates for this species in Massachusetts are from mid-July to mid-September (Nikula 2003), whereas flight dates in the western Great Lakes states extend to the end of September (Mead 2003). Dunkle (2000), gives a somewhat longer flight period of early June to early October. The few observations for New York are from late August and early September, but the full flight season is probably similar to that listed above for other states.

The time of year you would expect to find Subarctic Darner present and reproducing in New York.

This guide was authored by: Paul G. Novak and Erin L. White

Information for this guide was last updated on: May 5, 2020