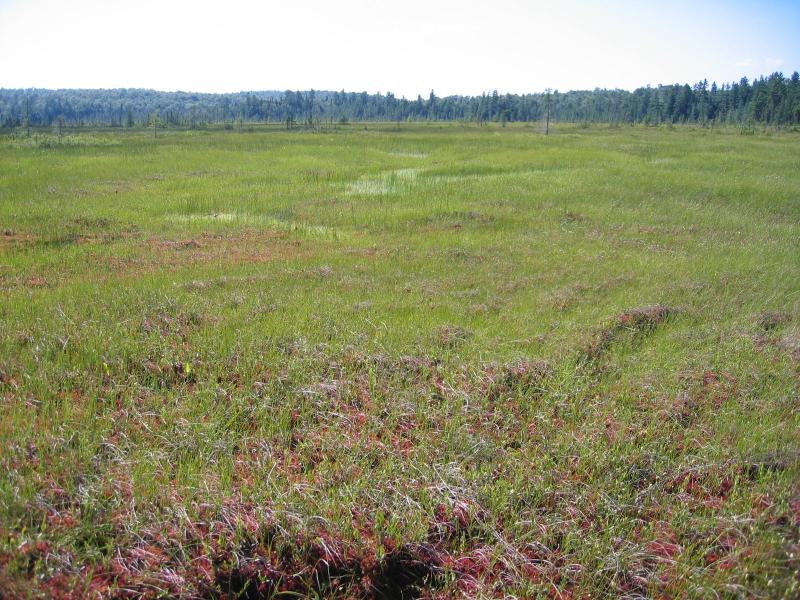 Patterned peatlands are characterized by distinct microtopographic patterns that form strings and flarks parallel to the wetland basin's slope and perpendicular to the underlying groundwater flow. Strings are low elevated ridges of peat vegetated primarily by low shrubs, sedges and the occasional stunted tree. Flarks are low swales or hollows that are open, wet Sphagnum lawns with sedges and rushes as their representative species.

There are probably less than five occurrences of patterned peatland in New York where it reaches its southern limit in North America. Patterned peatlands are limited to the largest peatland areas in the Adirondacks where water flow is sufficient to form strings and flarks. Currently documented occurrences are protected on state land or private conservation land.

The numbers and acreage of patterned peatlands in New York have probably remained stable in recent decades as a result of wetland protection regulations and land conservation efforts. There may be cases of slight decline due to alterations of peatland hydrology.

Given their limited historical distribution, the numbers and acreage of patterned peatlands in New York have probably remained relatively stable within the last few hundred years.

Ditching and other hydrological alterations associated with the construction and maintanence of road and trails and the use of off-road vehicles are significant threats. Sedimentation and runoff from development, nearby logging, or land clearing is also a potential threat where adequate buffers are lacking.

Where practical, establish and maintain a natural wetland and upland buffer to reduce storm-water, pollution, and nutrient run-off, while simultaneously capturing sediments before they reach the wetland. Buffer width should take into account the erodibility of the surrounding soils, slope steepness, and current land use. Wetlands protected under Article 24 are known as New York State "regulated" wetlands. The regulated area includes the wetlands themselves as well as a protective buffer or "adjacent area" extending 100 feet landward of the wetland boundary (NYS DEC 1995). If possible, minimize the number and size of impervious surfaces in the surrounding landscape. Avoid habitat alteration within the wetland and surrounding landscape. For example, roads and trails should be routed around wetlands, and ideally not pass through the buffer area. If the wetland must be crossed, then bridges and boardwalks are preferred over filling. Restore past impacts, such as removing obsolete impoundments and ditches, in order to restore the natural hydrology. Prevent the spread of invasive exotic species into the wetland through appropriate direct management and by minimizing potential dispersal corridors, such as roads.

More quantitative data on vascular and nonvascular composition, including characteristic bryophytes of this community are needed. Maps of the vegetation patterns at each site are needed, as is monitoring of permanent plots to assess changes in composition and hydrology.

Research is needed to fill information gaps about patterned peatlands, especially to advance our understanding of their classification, ecological processes (e.g., fire and response to global climate change), hydrology, floristic variation, characteristic fauna, development, and succession. This research will provide the basic facts necessary to assess how human alterations in the landscape affect peatlands and will supply a framework for evaluating the relative ecological and conservation value of peat bogs (Damman and French 1987).

Currently this community is restricted to the north-central Adirondacks which represents the southeastern extreme of its range. The historical range of patterned peatlands in New York is unknown and may have extended through the Adirondack foothills.

This community is limited to Canada and the northern border of the eastern U.S. This range is estimated to span north to northern Ontario and Quebec, west to Minnesota and Alberta, southeast to New York and Maine, and northeast to New Brunswick and Newfoundland.

An open peatland with a gentle slope or divide in which the vegetation consists of a repeating pattern of high and low areas (relative to water levels) that are called strings and flarks, respectively. These features occur as narrow or broad bands of vegetation that extend perpendicular to the direction of water flow across the slope of the peatland, and are arrayed in a parallel or mottled manner. The strings, or hummocks (high, relatively dry areas), are usually ombrotrophic or weakly minerotrophic, and the flarks, or hollows (low, relatively wet areas), are more minerotrophic. In New York, the most pronounced patterning occurs in three bogs that are primarily ombrotrophic and are slightly raised at the center. These bogs have a subtle ladderform pattern of slightly raised linear hummocks (strings) and broad, shallow hollows (flarks) along one of the slopes, as well as several small ponds.

Known examples of this community have been found at elevations between 1,540 feet and 1,732 feet.

Early summer when the various shrub species are in full bloom is a particularly picturesque period to visit this peatland community. 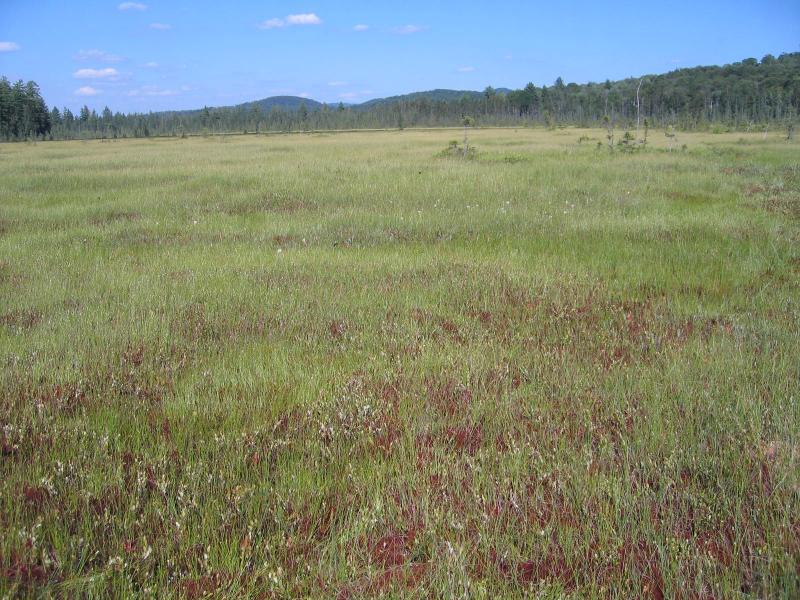 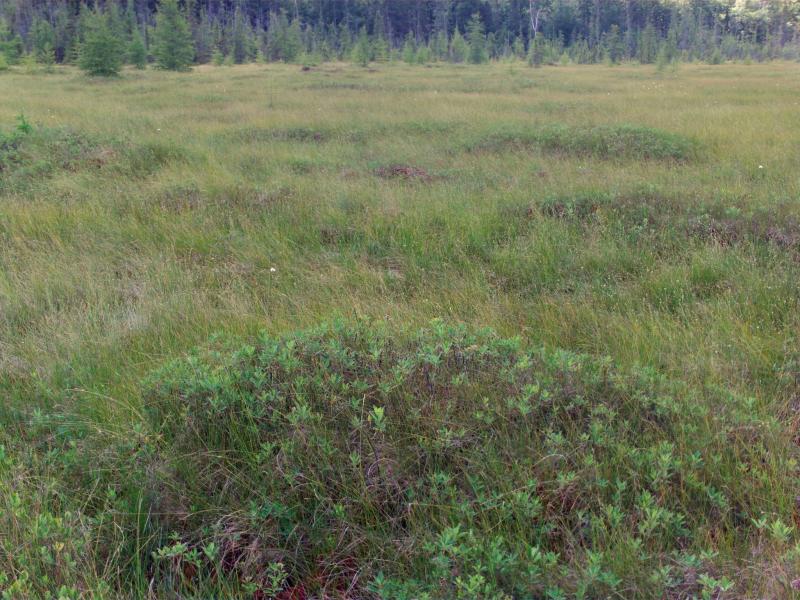 String and flarks of patterned peatland at Spring Pond Bog
Elizabeth A. Spencer 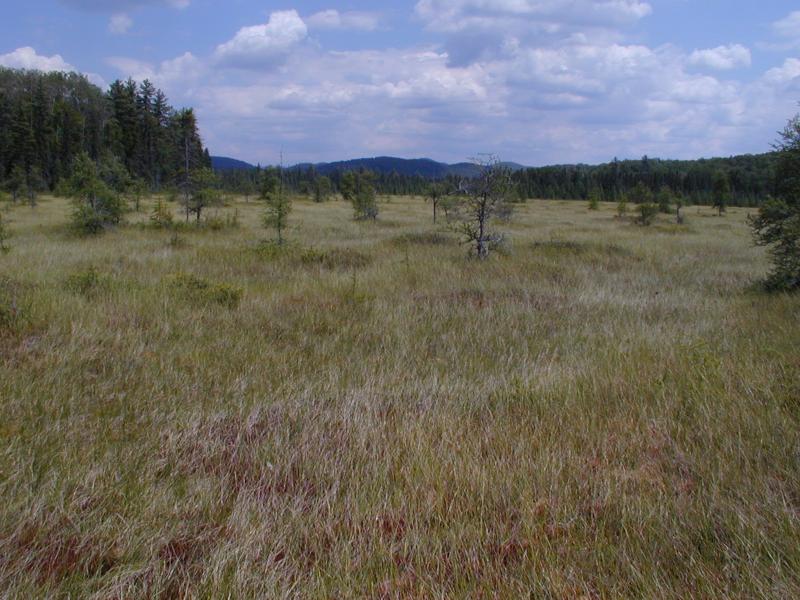 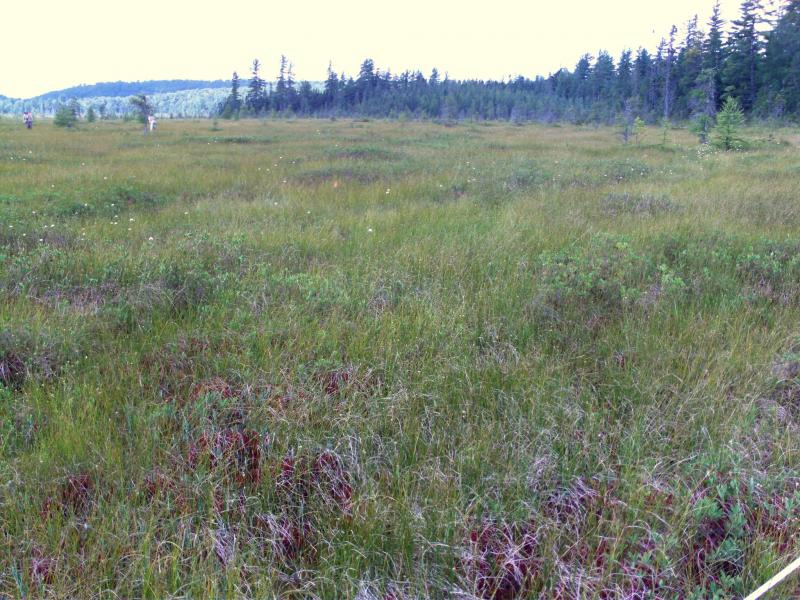 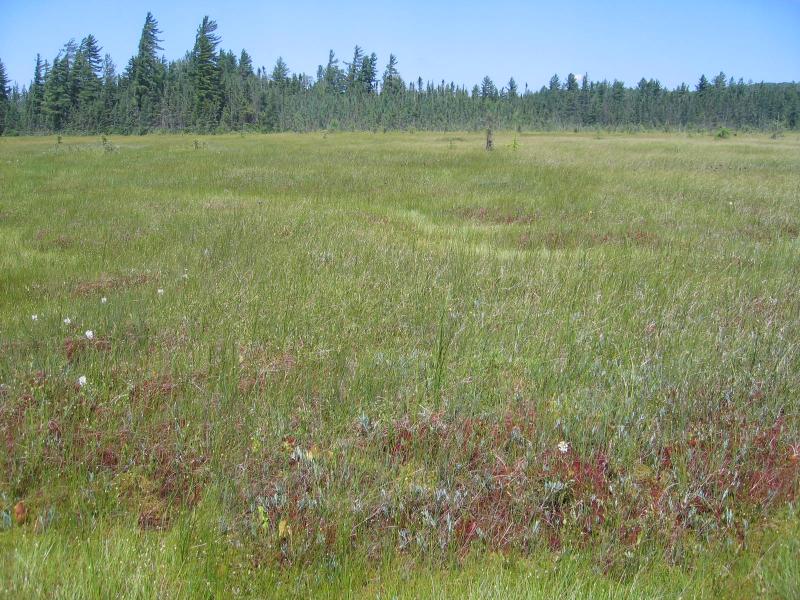 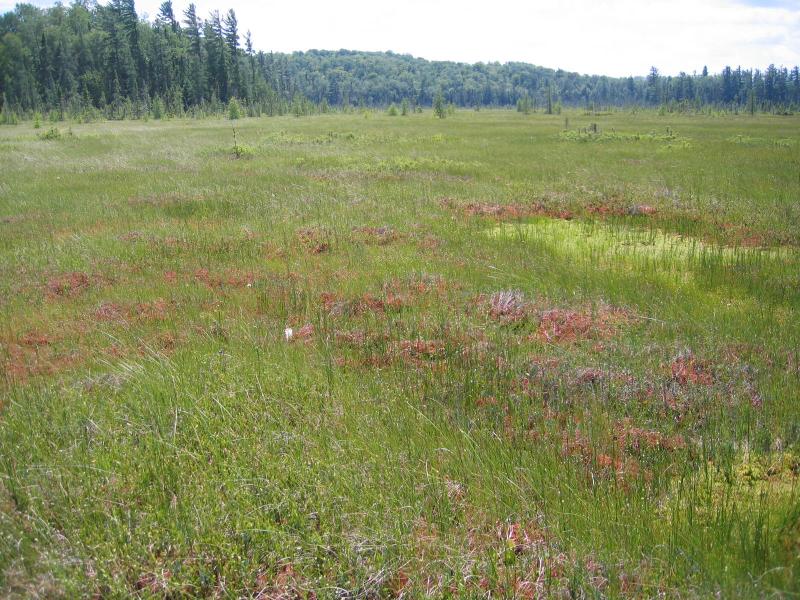 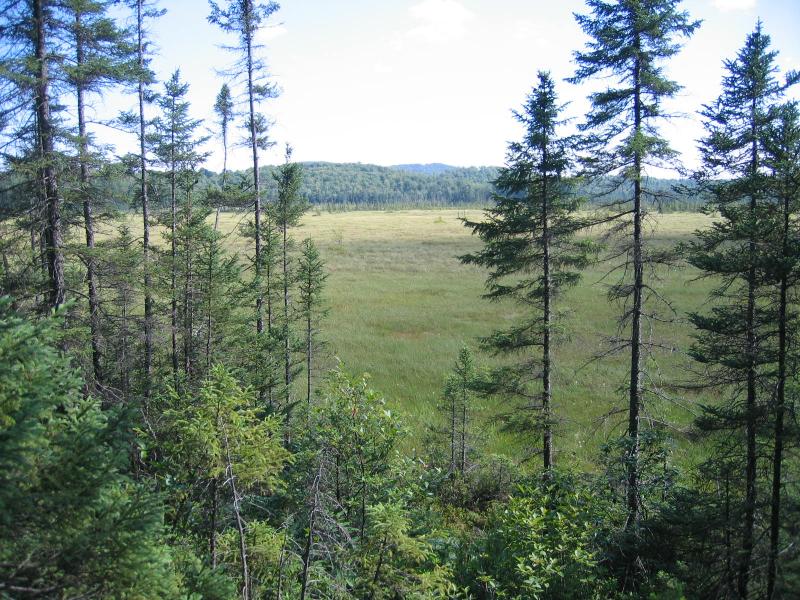 This figure helps visualize the structure and "look" or "feel" of a typical Patterned Peatland. Each bar represents the amount of "coverage" for all the species growing at that height. Because layers overlap (shrubs may grow under trees, for example), the shaded regions can add up to more than 100%.

This guide was authored by: Elizabeth Spencer