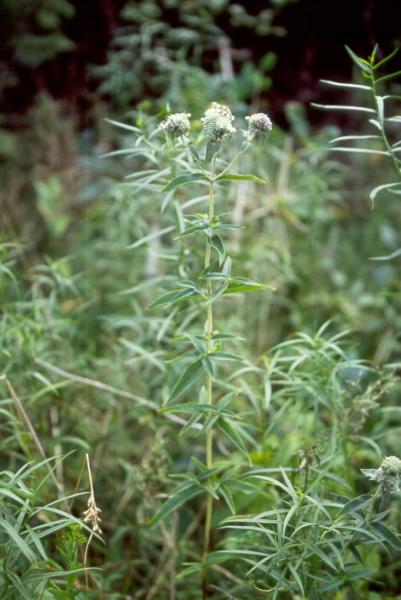 The leaves of all Pycnanthemum species have a strong mint fragrance that can even be smelled in museum specimens decades old. Many members of the genus have been used medicinally to treat digestive and other disorders.

More work is needed to determine the short-term population trends for this species, as most verified occurrences are small and have only been visited once.

There are equally small numbers of both historical and verified populations for this species in New York. It has likely always been rare in the state, though some populations have been overlooked.

Ditching and spread of the invasive grass species Phragmites australis are threats at one of the fen sites. Succession and ATV use are potential threats at both the fen and dune sites.

Mowing or clearing, if done after the growing season, may benefit this species at sites which are succeeding to woody vegetation.

Pycnanthemum verticillatum var. verticillatum is known from Richmond, Suffolk, Ulster, and Delaware Counties in southern New York, and there is a single known population in St. Lawrence County.

Pycnanthemum verticillatum var. verticillatum is found along the U.S. Atlantic Coast from Maine to Georgia, and inland as far west as Ontario, Michigan, Kentucky, Tennessee, Missouri, and Arkansas.

Pycnanthemum verticillatum var. verticillatum is a rhizomatous herb with branching, square stems up to 1.5 m tall the stems minutely pubescent throughout. Like other Mountain-mints it is strongly aromatic, such that a strong spearmint odor from the leaves may be the explorer's first clue to its presence. The leaves are narrowly lance-shaped, 3-5 cm long and only 8-12 mm wide, with an acute tip, and hairy only along the veins of the lower surface. The flowers are crowded into numerous heads 8 to 15 mm thick, and subtended by leaf-like bracts They are white, and two-lobed, the lower lobe purple-spotted. The teeth of the sepals (calyx) are narrowly triangular, acuminate, and .5 to 1 mm long. Variety verticillatum is the only native variety of Whorled Mountain-mint found in New York. Pycnanthemum verticllatum var. pilosum, a non-native variety, has been reported from Wayne County. Its leaves are pubescent throughout their lower surfaces.

Specimens with stems, leaves, and either flowers or mature fruit are needed to identify this species.

Pycnanthemum torrei has leaves and bracts which are glabrous on the upper surface, and softer and less veiny than those of P. verticillatum . P. torrei also has longer (1 to 1.5 mm) and sharper calyx teeth (Gleason and Cronquist 1991). Pycnanthemum virginianum stems are pubescent only on the angles (Rhoads and Block 2000).

Whorled Mountain-mint flowers from July through August, and the fruits may persist into mid-October.

The time of year you would expect to find Whorled Mountain Mint flowering and fruiting in New York. 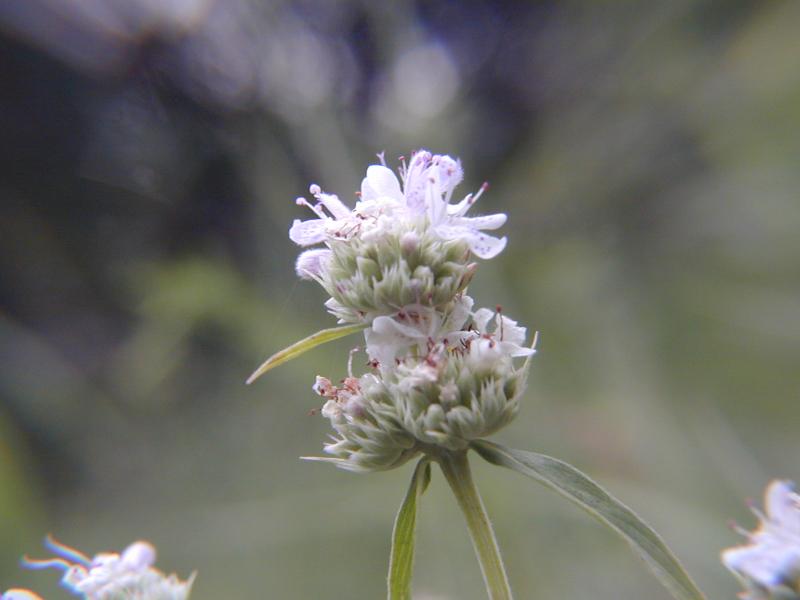 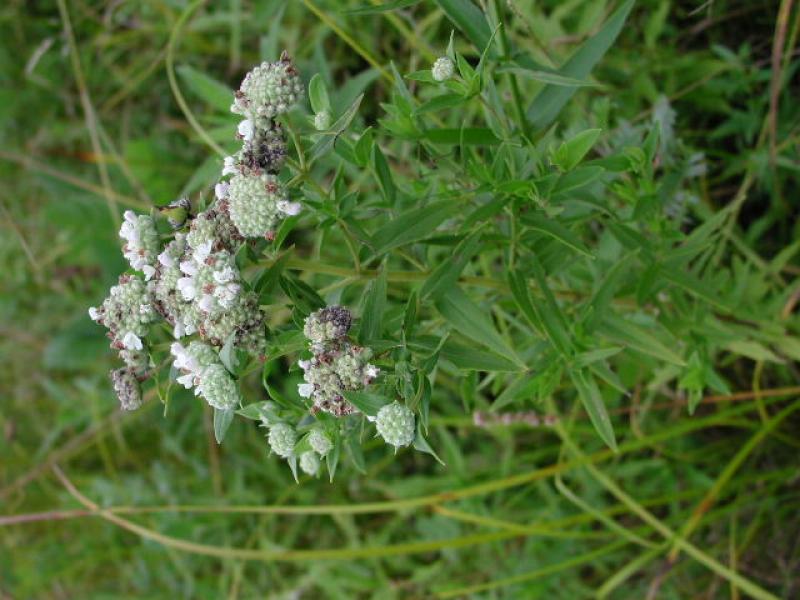 The other variety of Pycnanthemum verticillatum, var. pilosum, has been collected from just one location in the state, and is not considered native to New York.