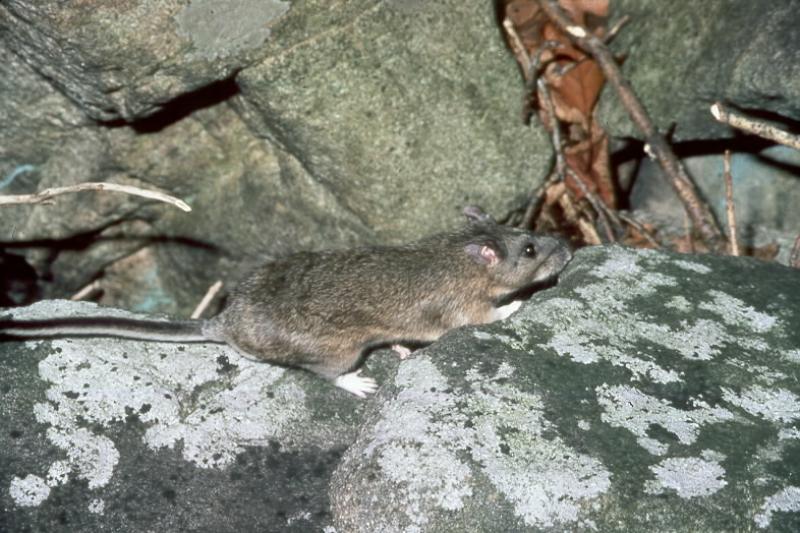 There is a single potentially extant occurrence in New York that represents a recent rediscovery. The population at this location is small and possibly unstable. The general belief is that the species was extirpated from all other locations in the state by 1987 (New York State Department of Environmental Conservation 2007). A reintroduction effort in the Shawangunks in Ulster County in 1990 was unsuccessful due to subsequent infection by the raccoon roundworm (Baylisascaris procyonis) in the released animals (McGowan 1993).

Although the species was rediscovered at a single location in the early 2000s, this probably does not represent a population increase as this is the northernmost limit of a larger population that extends north from New Jersey's only known (meta)population. Thus, it is made up of immigrants that occasionally occupy a small patch of habitat. Data from New Jersey's monitoring program shows the species barely hanging on in that state, with the total population size estimated at fewer than 50 individuals and the subsite closest to New York being uninhabited in 2017 (Menasion 2018, Grietzer 2018).

Formerly this woodrat occurred throughout much of the lower Hudson Valley at over 50 different locations. A decline in the numbers and range of this was first noticed in the 1940s and the decline was severe by the mid-1970s. The species is believed to have been extirpated from the state by 1987 (New York State Department of Environmental Conservation 2007). A reintroduction effort was attempted at two locations in Ulster County in 1990, but these attempts failed. The cause of the failure of these reintroduction attempts, and believed to have been responsible for the extirpation of this species from the state, is the nematode Baylisascaris procyonis, or raccoon roundworm (Hicks 1989, McGowan 1993, New York State Department of Environmental Conservation 2007). This nematode normally lives in the intestinal tract of raccoons and its eggs are shed in raccoon feces. While this parasite does not adversely affect raccoons, it will cause mortality in other species if the eggs are ingested. The combination of the foraging behavior of woodrats and the widespread contamination of woodrat habitat with infected raccoon feces, resulting from an increase in raccoon numbers in New York in the past, likely explains why woodrats recently became more susceptible to this deadly parasite.

LoGuidice (2006) describes the confluence of several stressors beginning after European settlement which led to the severe range retraction at the northern range boundary in the northeast. These include: large scale deforestation and conversion to agriculture, loss of the American Chestnut (Castanea dentata) in the early 1900s as a winter food source, extensive habitat fragmentation after WW II, spongy moth defoliation of oaks in the 1960s-70s, recovery of mast competitors (deer, turkeys) since the 1960s, and the last straw-- raccoon roundworn from increased raccoon populations since the 1970s. Manjerovic et al. (2009) presented data suggesting that climate warming has also palyed a detrimental role. The raccoon roundworm parasite (Baylisascaris procyonis), combined with a small population size, makes the single New York site subject to possible extirpation at any point in time (Smyser et al. 2012). Raccoon roundworm eggs persist in the environment and this factor continues to be a threat at extirpated locations in New York (see Long-term Trends for a description of this parasite).

At formerly suitable sites, the examination of raccoon latrine densities and raccoon roundworm (Baylisascaris procyonis) infection rates in raccoon latrines are necessary to determine the time period for these locations to become suitable again. An experimental release should again be conducted to determine if apparently suitable sites can sustain woodrat populations (New York State Department of Environmental Conservation 2006). The Palisades population should be thoroughly surveyed or monitored on a periodic basis, logically in conjunction with New Jersey surveys.

Throughout the range, the Allegheny woodrat is associated with extensive rocky areas. These rocky areas include rock outcrops and ledges with associated boulders and talus slopes. Woodrat habitat also includes caves and former mines in these rocky locations (e.g., old iron mines in the Hudson River Valley). Woodrats tend to avoid humans, but the species will sometimes use abandoned buildings (NatureServe 2007). The habitats that formerly supported woodrat populations is generally at higher elevations, although in New York it has been documented to occur along the Hudson River at or near sea level.

The Allegheny woodrat is at the northern extent of its range in New York State with only one possibly extant occurrence in Rockland County. This species historically occurred in at least three counties in the Hudson River Valley, on the west side of the Hudson River, from the Palisades at the New York-New Jersey border north through the Hudson Highlands and the Shawangunk Ridge (New York State Department of Environmental Conservation 2007). Researchers have discovered prehistoric evidence of woodrats (i.e., bones over 20,000 years old) as far north in the Hudson River Valley as Albany (Hicks 1989, New York State Department of Environmental Conservation 2007).

The Allegheny Woodrat's pelage is grayish-brown with white underparts. It has large eyes and ears and a long bi-colored tail that is completely furred (NatureServe 2007, New York State Department of Environmental Conservation 2007). The coloration has been described as follows: "In winter the coloration above is buffy gray to pale cinnamon, heavily overlaid with black. The head and the sides of the body are buffy gray, while the axillae, or armpits, are creamy buff. The throat, belly, and feet are white, the fur being white to the roots except along the sides of the belly, where the basal color is pale leaden gray. The tail is sharply bicolored, blackish brown above, white below. The summer pelage is slightly paler and shorter. Immatures are grayer than adults, particularly on the belly" (Godin 1977 in NatureServe 2007). The approximate total length is 14 to 17.5 inches (35.5 to 44.7 cm), the tail length is about 6 to 8 inches (16 to 21 cm), and the weight is approximately 0.8 to 1.1 pounds (394 to 500 grams) (Godin 1977), with males averaging slightly larger than females (NatureServe 2007). A ventral skin gland which produces a strong, musky, odor is present in both males and females and the musky odor is especially noticeable in breeding males (NatureServe 2007).

The overall large size and tail that is completely covered with hairs, approximately one-third of an inch long and prominently bicolored, is distinctive.

The generally nocturnal (New York State Department of Environmental Conservation 2007) Allegheny Woodrat is basically a solitary and territorial animal and each usually lives alone, except during the breeding season and when raising young (NatureServe 2007). Allegheny Woodrats are found in population clusters, largely due to the patchiness of the habitat the species occupies (rock outcrops, talus, and caves) (NatureServe 2007) and these clusters function as metapopulations (Hassinger et al. 1996). The home range is small and has been reported as 0.26 to 0.6 ha (approximately 0.6 to 1.5 acres) (Wright and Hall 1996). Foraging mainly takes place within the rocky habitat, but may extend beyond the rocks for up to 160 meters (525 feet) (Wright and Hall 1996). Woodrats can disperse significant distances between patches of suitable habitat, from 0.3 to 1 km (McGowan 1993) or greater, but as distances increase, the odds of successfully traveling between patches of rock may decrease (NatureServe 2007). Female woodrats become sexually mature in five to six months with some females breeding in the same season as their birth, although they usually become sexually mature during the spring following their birth (Hicks 1989, Wiley 1980). The breeding season is reported as late winter to late summer, with a gestation period of 30 to 38 days (New York State Department of Environmental Conservation 2007, Birney 1973), and the young are born from March to September ( Merritt 1987, NatureServe 2007). Females usually produce one or two litters of one to three young annually (Hicks 1989). Middens, or piles of sticks and other debris gathered by woodrats, can be found near the nests (NatureServe 2007), which are composed of finely shredded bark and similar materials (New York State Department of Environmental Conservation 2007). A portion of the materials found in woodrat middens and nests is cached food (NatureServe 2007). There may also be miscellaneous bits of trash, bones, and animal feces in these areas (NatureServe 2007, New York State Department of Environmental Conservation 2007). Woodrat scats are deposited in specific locations, known as latrines, and these latrines are used by one or more individuals (NatureServe 2007). Urinating spots are also used in a similar fashion (Schwartz and Schwartz 1959). The lifespan of the Allegheny Woodrat has been reported to be more than three years in the wild (Fitch and Rainey 1956), but, as mortality is normally high, it may be shorter. Woodrats are known to chatter their teeth or stomp their hind feet when agitated (Wiley 1980).

Woodrats are primarily vegetarian and eat a variety of food items including green leafy material, twigs, nuts, berries, and seeds (NatureServe 2007, Hicks 1989). Fungi may be a significant part of the diet (Newcombe 1930). The seed pods of Royal Paulownia (Paulonia tomentosa) have been reported as winter food in New Jersey (Beans 1992) and this plant is present in the single extant location in New York.

Primarily nocturnal; most active during first few hours of darkness; less active on moonlit nights (Wiley 1971); more active on cloudy, rainy nights than on clear ones (Rainey 1956, Tate 1970). Active throughout the year but tends to remain "indoors" during bad weather (Poole 1940).

The time of year you would expect to find Allegheny Woodrat active in New York. 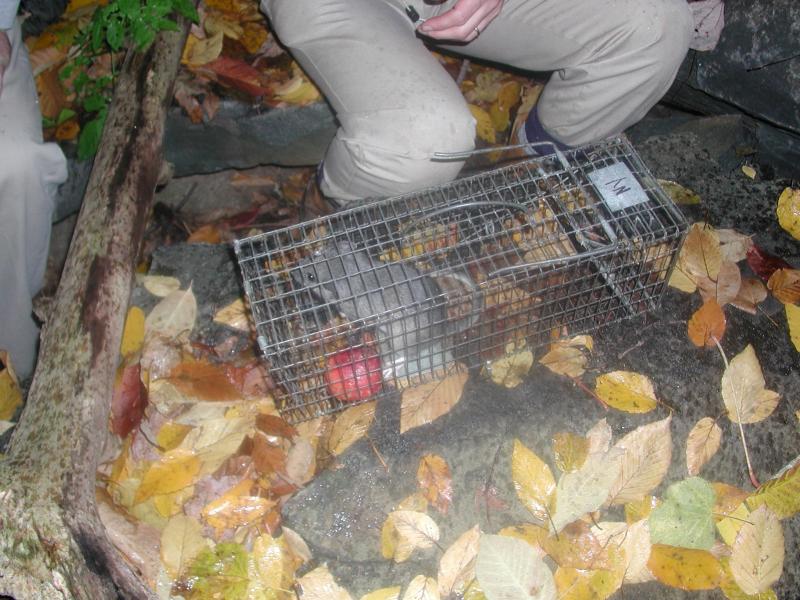 Beans, B. E. 1992. Without a trace: the puzzling demise of the Allegheny woodrat. Audubon Magazine January/February.

Manjerovic, M.B., Wood, P.B. and Edwards, J.W. 2009. Mast and weather influences on population trends of a species of concern: the Allegheny woodrat. The American Midland Naturalist 162:52-62.