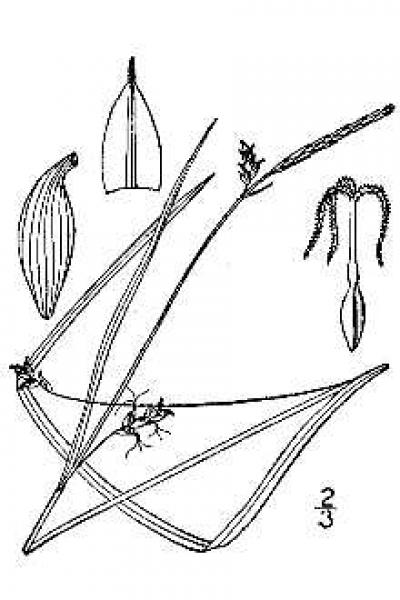 Styloflexa means with a curved style (Fernald 1970). Since the style is enclosed in the beak of the fruit it naturally follows the curve of the beak.

There are only two known populations and ten historical locations. As a plant near the northern edge of its range, it likely has always been rare within New York. Many of the historical collections are from areas that are now heavily developed.

Most populations are only known from specimens collected over 70 or more years ago. However, this does not necessarily indicate a downward trend. As a difficult species to identify, this sedge may be overlooked. More monitoring is needed on the known populations and better searching is needed statewide to determine if more plants are present. Until this information is garnered, no clear assessment can be made on the short-term trends.

Six historical populations are believed extirpated due to human development. Another seven populations have not been seen in over 70 years but the exact locations of these populations are unknown. The only two known extant populations were first discovered within the past 20 years. Since many Carex species and especially ones in section Laxiflorae are often overlooked or identified incorrectly, it can be assumed that these two new populations were probably overlooked in the past. Overall, long term trends indicate that this sedge is probably declining in New York, mostly due to habitat alteration. If additional populations are found and protected, this apparent downward trend may be stabilized.

One extant population of Carex styloflexa may be threatened by trampling as it is found along an area heavily used for recreational fishing activities. This site should be monitored more to determine the true threat.At least six sites are believed extirpated due to human development. All of these sites are from Long Island and/or the greater metropolitan NYC area. Additional historical populations are known from this area and, although specific locality information is not always available, may also be threatened by habitat destruction caused by residential and/or commercial human development.

Since Carex styloflexa is a member of a notoriously difficult section of Carex it would be good to verify all relevant specimens, especially those from disjunct populations in Rensselaer, Madison, and Tioga Counties.

This sedge mostly occurs in wet habitats often along the edges of streams. It has also been documented in New York from wet pine barrens, damp thickets, swampy woods on the border of a brook, edge of rich woods, and a sphagnum bog. There is also one specimen known from thin soil on limestone ledges in woods. This habitat information is suspect (New York Natural Heritage Program 2005). Wet, sandy, acidic soils, around springs, seeps, and small streams, under deciduous or mixed deciduous-evergreen forests (Bryson and Naczi 2002). Wet woods and bogs, often in sandy or silty soil (Gleason and Cronquist 1991). Low woods, wet moss, peaty spring-heads, etc. (Fernald 1970).

In New York, Carex styloflexa is almost entirely known from the greater New York City area including Nassau and western Suffolk County. There are also a few known populations from the Mohonk Preserve in Ulster County. There is one old record from Tioga and another from Madison County in central New York. In addition, there is a more recent record from Rensselaer County in eastern New York. These three populations are disjunct from the rest of the known occurrences and should be verified for accuracy.

Carex styloflexa is almost strictly a coastal plain species where it is common on the Atlantic and Gulf coastal plains from New York (and perhaps Vermont) south to Florida and the eastern third of Texas. It is uncommon inland in the Piedmonts and Appalachian Mountains and occurs as far north as Illinois, historically in Ohio, and possibly Indiana. (In Indiana, past records were misidentified and there is no proof of its existing in the state [Hellmich 1994].) It is possible that the species may range south of the United States border, but Bryson (1994) knows of no such collections and notes that he has never seen it south of the orange-growing region in Florida. The range for C. styloflexa is very similar to the botanically comparable C. striatula; however, C. striatula is more common further inland on the continent (Bryson 1994). On the northeastern end of its range, historic collections were made in Connecticut, one of which was from Seldens Neck in Lyme (Graves 1899, Fernald 1902). The New York sites include historic collections from Long Island and New York City, plus one recent record from Rensselaer Co. Some upstate records are thought to be misidentifications (New York Natural Heritage Program 1994).

A grass like plant, this sedge is a densely tufted perennial. It has leaves that arise from the base of the plant and along reproductive stems (culms). The leaves are narrow, green to yellow-green and flat. It has 3-4 clusters of flowers/fruits (spikes) the lowest on stalks arising from the lower 1/3 of the culm. The flowering stems bear one slender male spike above the two to five, wider, few-flowered female spikes (Bryson and Naczi 2002).

Carex styloflexa has basal sheaths light brown to brown. Leaf blades are 12-14 mm wide according to Bryson and Naczi (2002) while others claim they are narrower (Rhoads and Block (2000) claim they are 2.5-8.7 mm wide and Gleason and Cronquist (1991) claim they are seldom over 7 mm wide). This sedge has reproductive culms 24-82 cm long with one terminal staminate spike that is 1.1-3.5 cm long. It also has 2(-3) lateral pistillate spikes which are 6-9(-15) mm long, the proximal ones arising from the proximal 1/3 of the culm. The peduncles of the pistillate spikes range from 0-12 cm long and the longest is 4.6-14 times as long as the spikes they subtend. The perigynia are densely to loosely arranged on the spikes, 3.5-5.5 mm long, have out curved beaks, and are spreading (Bryson and Naczi 2002).

Carex styloflexa is a member of the section Laxiflorae which has a few other species in New York (C. albursina, C. blanda, C. gracilescens, C. laxiflora, C. leptonervia, C. ormostachya, and C. striatula). Some of these species are at least superficially similar although C. styloflexa is a fairly distinctive member of this group.

Carex styloflexa is in immature to mature fruit from late May through June. The best time to survey for this species is during this time period.

The time of year you would expect to find Bent Sedge fruiting in New York.