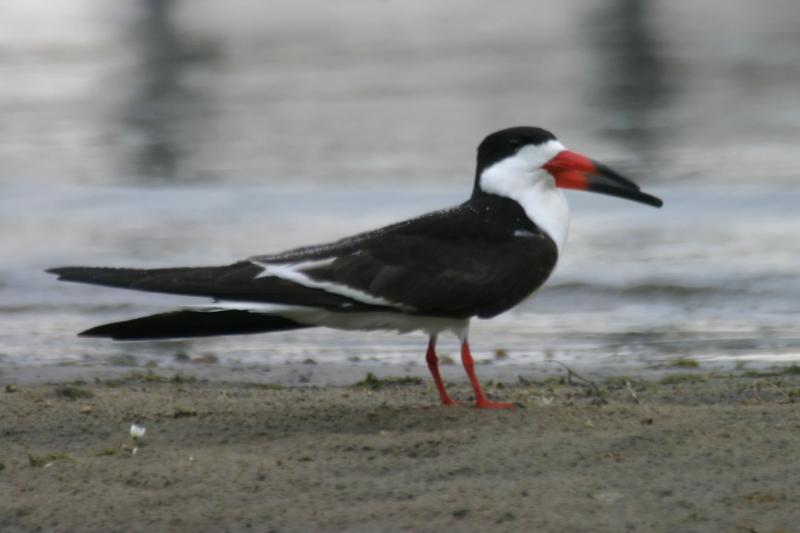 The Black Skimmer is so named by one of the ways it feeds-collecting food in its lower bill as it skims across the surface of the water (Arthur, 1921).

New York is near the northern limit of the Black Skimmer's breeding range, with breeding populations being restricted to beaches, dredge spoil islands, sandy non-barrier islands, and recently, salt marsh islands along the coast of southern Long Island (New York Natural Heritage Program 2009). Much of the former breeding habitat has been lost due to development and recreational activities along Long Island's beaches, resulting in the Black Skimmer and other beach-nesting species to nest on salt marsh islands (Gochfeld and Burger 1994; McGowen and Corwin 2008).

Black Skimmer populations in New York appear to be variable, with some degree of yearly fluctuation due to the timing of formal survey periods. The first Breeding Bird Atlas (1980-1985) had confirmed breeding Black Skimmers in 23 blocks mostly along the southern shore of Long Island. The second Atlas (2000-2005) saw reduced numbers of skimmers with confirmed breeding in 18 blocks, again, mostly along southern Long Island (McGowen and Corwin 2008). Black Skimmers are surveyed annually and over the last eight years, their numbers have ranged from a low of 265 in 2004 to a high of 622 in 2008 with an average of 445 pairs (Gibbons 2008). These numbers may be slightly low as Black Skimmers nest later in the season than the June survey period and numbers for the peak nesting season may be missed. About 16 out of 49 colonies are still active (New York Natural Heritage Program 2009).

Black Skimmers have been seen in New York since the mid 1800s (Gochfeld and Burger 1994). They were first discovered breeding on Long Island in 1934 at Gilgo State Park (Vogt 1934). They were common breeders on Long Island throughout the middle of the 20th century, with an average of over 400 pairs at 10-13 colonies reported during surveys conducted from 1974-1978 (Buckley and Buckley 1980).

Loss of suitable nesting and foraging habitat due to development, recreation, and erosion pose the greatest threat to the Black Skimmer. During the nesting season, the birds are often subject to disturbances such as beach grooming, recreation, vandalism, and predation by cats, crows, gulls, fox, and raccoons. These disturbances may cause nest abandonment and reduce productivity (Gochfeld and Burger 1994; Rosenblatt 2006; McGowen and Corwin 2008).

Continue to protect nesting and foraging areas by installing fencing, posting interpretive signs, performing yearly surveying and monitoring, conducting educational programs, and controlling predators. Work with landowners to participate in management activities. Habitat restoration practices such as removing vegetation from areas that are overgrown and depositing dredge spoil to replenish eroded beaches should be continued. Continue to develop and conduct management and habitat restoration plans along with state, local, and federal partners. Encourage beach maintenance activities to be conducted before or after nesting season. If possible, areas where birds are known to be nesting should be closed off until chicks have fledged. Encourage beach-goers with dogs to comply with the local Leash Laws (Gochfeld and Burger 1994; Rosenblatt 2006; McGowen and Corwin 2008).

Black skimmers are New World species, meaning they are only found in the western hemisphere. In North America, they breed along the Atlantic, Gulf and Pacific coasts; from Massachusetts to central Mexico in the east and in isolated areas from southern California to Ecuador in the west. They are year-round residents from the coast of North Carolina to Mexico. Black Skimmers that breed along the northern Atlantic overwinter along the coast from South Carolina to the Gulf coast and occasionally overwinter along the coast of Central and South America. Largest concentrations of wintering Black Skimmers occur in the Everglades of Florida (Gochfeld and Burger 1994; NatureServe 2009).

The Black Skimmer is a medium-sized bird 45-60 cm in length with a long wingspan averaging 112 cm (Peterson 1980; National Geographic Society 1999). They are easily identified by their unique bill, with the lower mandible being longer than the upper. Adults in breeding plumage are black from the top of the head down the neck, back, and wings to the base of the tail. The forehead, cheeks, foreneck, tail, underparts, and edges of the secondary feathers of the wings are white. The bill is hinged and laterally compressed. The lower mandible is longer than the upper one. The base of the bill is red-orange while the rest of the bill is black. The legs are skinny and red. The dark-colored eye is surrounded by black feathers, making it appear invisible. Adults in nonbreeding plumage have a white collar around their neck and their black coloration changes to dark brown. Males and females are similar in color but the female is significantly smaller than the male. Juveniles resemble adults during nonbreeding plumage but are mottled brown on top and their bills are shorter, with the base being orange-red and the rest black. Hatchlings are semi-precocial and covered with down. They are mostly gray on top and pure white on the bottom. The lower and upper mandibles of the bill are even in length (Gochfeld and Burger 1994). Eggs are round to oval in shape, average 45 by 34 mm in size, and are pale cream to light green in color with brown speckles in various shades. Eggs that are laid down first are darker in color than those that are laid down last (Bent 1921). Nests consist of a scrape in the sand about five cm deep and 25 cm in diameter. No vegetative material is added. The call of the Glossy Ibis sounds like a series of barking yips (Gochfeld and Burger 1994).

Black Skimmers can easily be identified by their scissor-shaped bill which also has the lower mandible being larger than the upper mandible.

Black Skimmers can be easily identified when the adults are in their breeding plumage.

Black Skimmers are colonial nesters and often nest among terns and gulls. The birds arrive at their breeding grounds in late spring with pair bonds already established. Both male and female create nest scrapes and eggs are laid seven to ten days later, with one egg being laid per day until a full clutch of 3-5 eggs is down. Black Skimmers will renest several times if the previous nest is destroyed. The incubation period lasts 21-25 days with male and female taking turns. Hatching is asynchronous and occasionally results in mortality of younger chicks (Erwin 1977; Gochfeld 1978; Gochfeld and Burger 1994). Black Skimmers are active day and night and often feed at night during low tide. They are typically solitary feeders, rarely feeding in flocks (Bent 1921; Erwin 1977). There have been a few inconsistencies as to how they capture their prey. Arthur (1921) studied their feeding behavior and noticed that Black Skimmers rarely caught prey while skimming across the surface of the water and extending their lower mandible into the water to catch fish. He observed the birds foraging while standing in shallow waters by plunging their bill straight down and grabbing their prey. Later studies indicated that skimming indeed is the preferred method of prey capture (Tompkins 1951).

Black Skimmers feed mainly on small fish but will sometimes forage for shrimp and other small invertebrates and crustaceans (Bent 1921; Leavitt 1957; Erwin 1977).

In New York, Black Skimmers arrive at their breeding grounds in mid-April and remain throughout the breeding season. They begin their fall migration to their wintering grounds in late fall but have been known to congregate in flocks until mid-December (Gochfeld and Burger 1994).

The time of year you would expect to find Black Skimmer active and reproducing in New York. 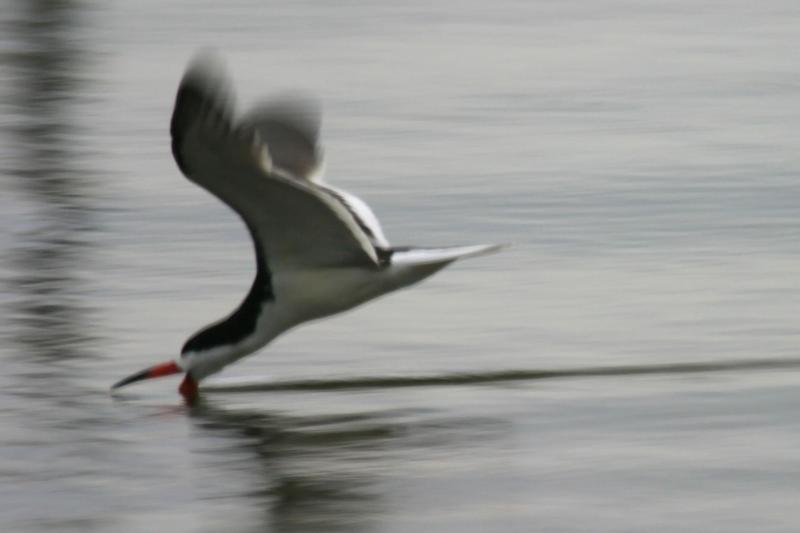 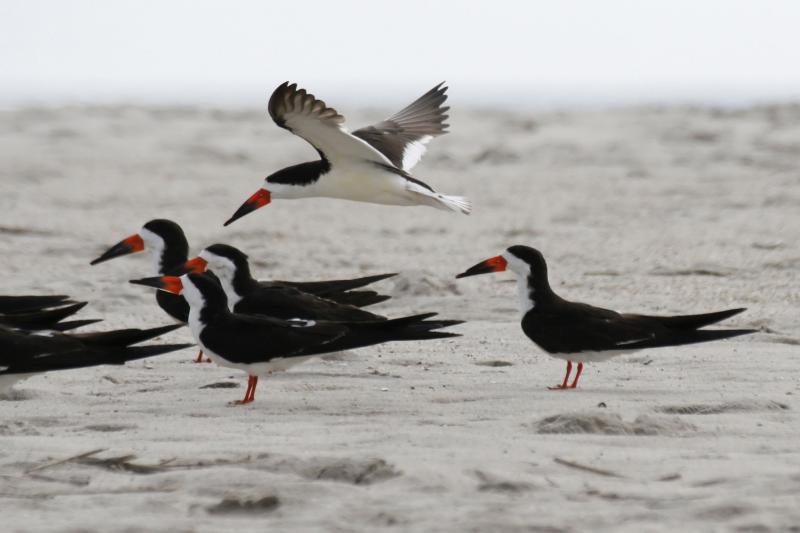 Information for this guide was last updated on: January 22, 2010