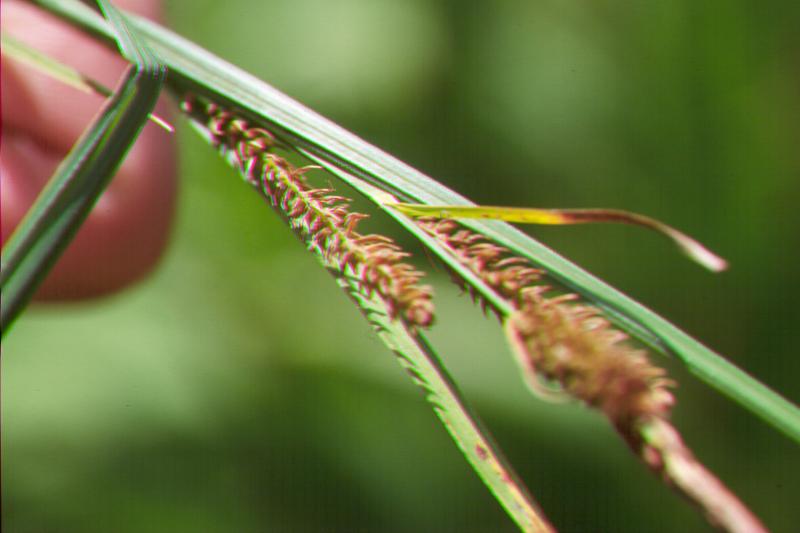 Although Carex haydenii is often mistaken for Carex stricta or vice versa, the two may not be very closely related (Standely et al. 2002). The specific epithet haydenii is named in honor of Ferdinand Vandeveer Hayden, 1829-1887, who discovered this species (Fernald 1970).

There are eight known populations and at least eight historical sites. In New York, it is a plant of open habitats of bogs/poor fens, moist meadows, and seasonally wet soils. It is easily confused with Carex stricta and possibly overlooked because of its similarity with this very common tussock sedge. Range-wide there have been observations that this plant is decreasing due to habitat conversion and land use changes. While there have not been enough surveys to support this downward trend within New York, there is no evidence to suggest the same decline is not happening.

There are at least 8 and perhaps as many as 20 populations that are only known from historical records. One of these populations was searched for without success but the locality information for this population is not precise and it may still be extant. The other historical populations may be extant as well. Carex haydenii may be more common in the Adirondacks than previous believed due to confusion with the similar C. stricta. All of the five populations that have been seen in recent years were also first discovered in recent years. These populations were probably overlooked in the past. Throughout the range of C. haydenii, it appears to be declining due to changes in land use (Standley et al. 2002). It is unknown if this is the case in New York. Overall, long term trends in New York are not clear.

There are currently no threats known although, invasive species are a potential threat at one population.

One population should be monitored for the spread of invasive species and if appropriate control efforts should be conducted.

Since C. haydenii is similar to C. stricta and because the two are often confused, all specimens that have not been annotated recently should be confirmed. Historical populations need to be surveyed to determine if they are still extant. There is abundant habitat for this species in the Adirondacks and new populations should be sought in the appropriate sites.

Cloud sedge is a large tufted grass-like perennial. The base of the plants are red-brown. Its leaves are strap-like and 3-6 mm wide. Stems 30-115 cm tall are rough edged and have 3-5 cylindrical flower/fruit clusters (spikes) towards their apices. The lower 2-3 spikes are composed of tiny female flowers which mature into fruits. The upper 1-2 spikes are composed of male flowers. Fruits (perigynia) are 1.5-2.8 mm long and have a minute beak at their tips (Standley et al. 2002).

Carex haydenii is cespitose and short rhizomatous. It forms large tussocks. Basal sheaths are red-brown and become ladder-fibrillose. The fronts (adaxial surfaces) of the sheaths are glabrous and smooth. Leaf blades are 3-5 mm wide. The culms are 30-115 cm long and often overtop the leaves. There are 2-3 curved lateral pistillate spikes that are 1-5 cm long and 4-6 mm wide. The terminal 1-2 spikes are staminate. Pistillate scales are red-brown, acute to acuminate, and longer than the perigynia. Perigynia are 1.5-2.8 mm long, inflated, and olive-brown with red-brown spots (Standely et al. 2002, New York Natural Heritage Program 2006).

This species is easiest to identify when it has almost mature to mature perigynia. The lower leaf sheaths and rhizomes are helpful in identification and therefore collections should include these parts.

Carex stricta is superficially similar and has often been misidentified as C. haydenii. At a glance in the field, C. haydenii can be recognized by its culms that clearly overtop the leaves and pistillate spikes which are relatively short and brown. In comparison, C. stricta has culms often about the same height as the leaves and pistillate spikes relatively longer and darker brown. Close inspection reveals that C. haydenii has pistillate scales longer than the perigynia; perigynia inflated and veinless; and leaf sheaths glabrous. In comparison C. stricta has pistillate scales shorter than the perigynia; perigynia not-inflated and with 0-5 veins; and leaf sheaths scabrous (Standley et al. 2002, New York Natural Heritage Program 2006).

Carex haydenii starts to produce immature perigynia in mid June. The perigynia mature and persist into August although during the later part of this season they start to shed. Therefore, the best time to survey for this species is late June through July.

The time of year you would expect to find Cloud Sedge fruiting in New York. 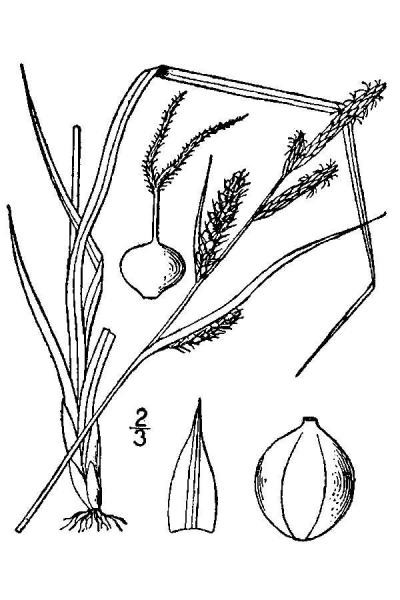 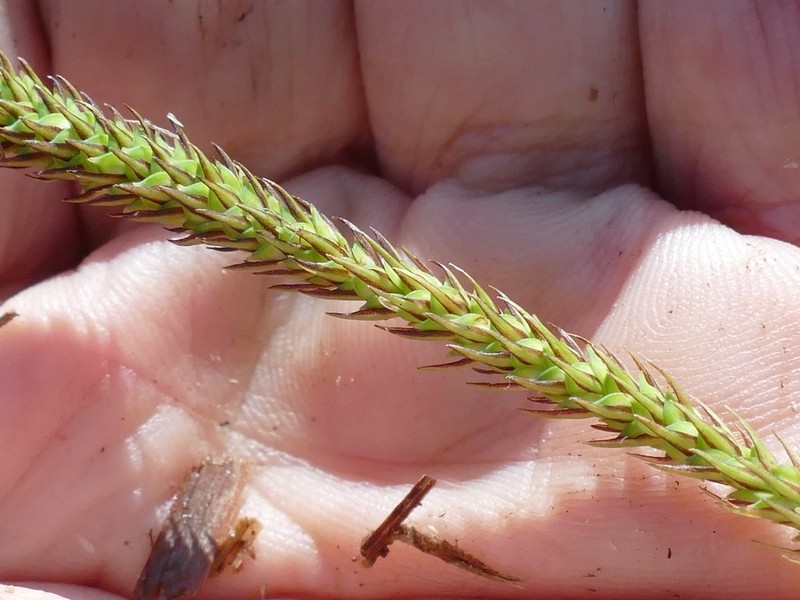 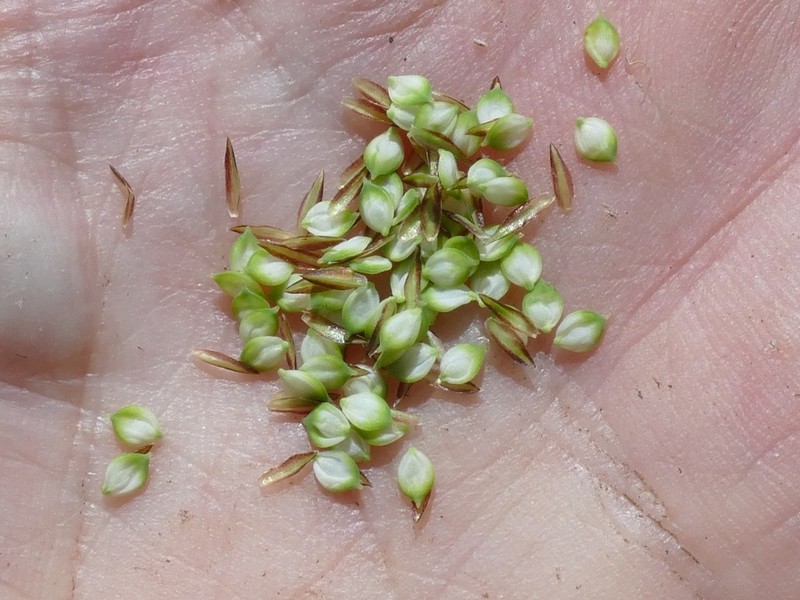 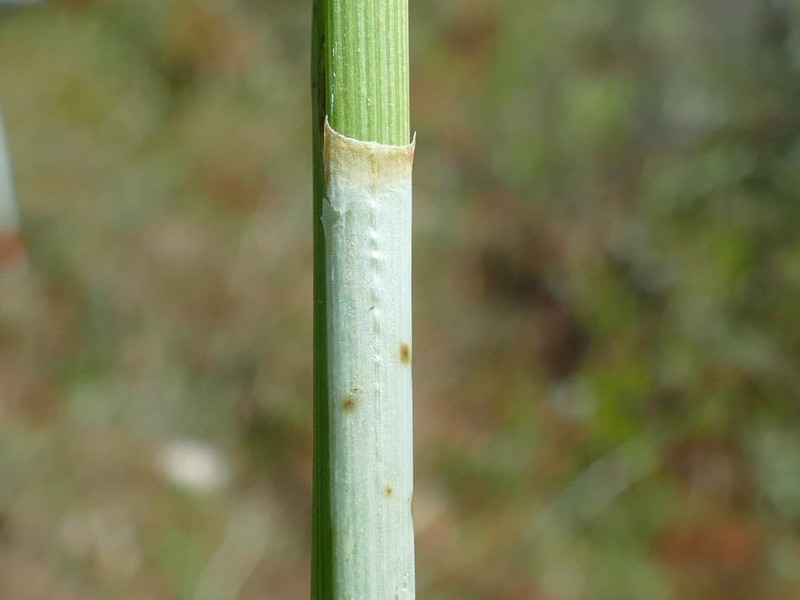 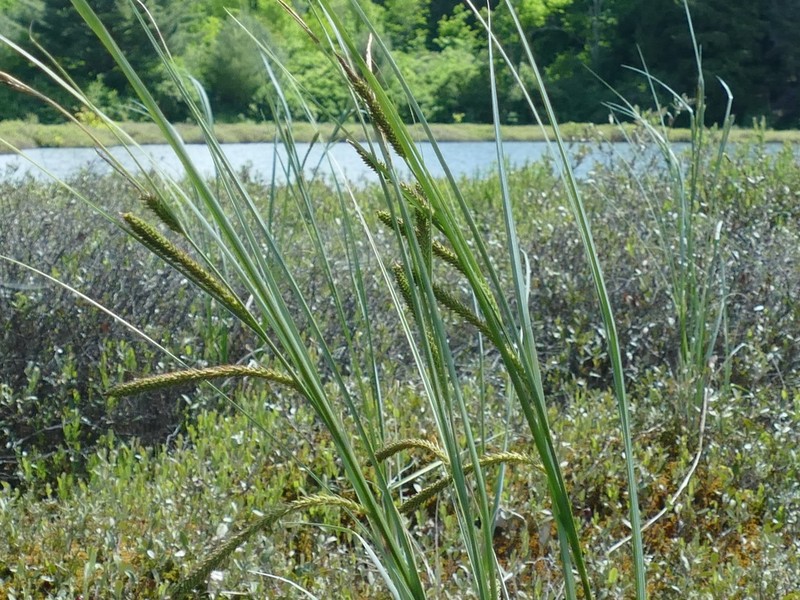 Carex haydenii is currently placed in section Phacocystis. It was formerly placed in section Acutae but that section is no longer considered distinct. Carex haydenii along with C. aperta, a western North American species, appear to be closely related and together may not be very closely related to other members of section Phacocystis (Standley et al. 2002).