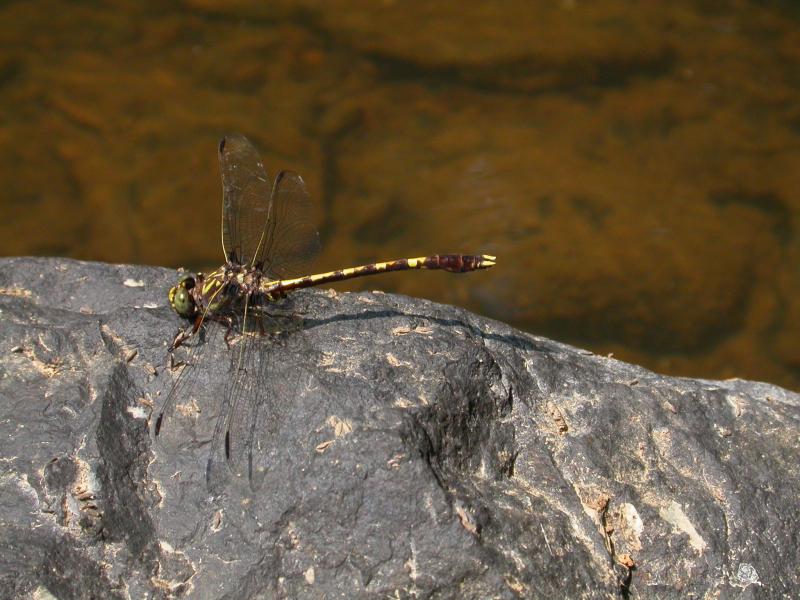 Possibly because of their short stocky legs, Sanddragons don't perch in riparian trees and shrubs to the extent that most clubtails do, but rather on the ground (Jones et al. 2008).

This is one of the rarest dragonflies in the state. Currently, there are only four known extant populations; two nearby ponds on the northshore of Long Island, and along the upper Hudson and Schroon Rivers in the southern Adirondacks. Despite an intensive statewide odonate survey between 2005-2009 (White et al. 2010), no new significant finds were made beyond the known historical distribution. Abundance levels at the Suffolk County ponds are fairly robust, while only small numbers of larvae have been found on the upper Hudson, and the Schroon River population was not re-confirmed during NYDDS.

It is unclear whether the the Schroon River population remains extant. It was not re-located during NYDDS (2005-2009) despite targeted searches for it. Likewise, only a few larvae have ever been seen at the upper Hudson River locale since the mid 1990s, despite much searching. On the other hand, abundance levels and reproductive activity at the two inhabited Suffolk County ponds appears to suggest more viable populations on the Coastal Plain.

Sanddragons have been known from Long Island since the 1920s and were first documented from the Hudson and Schroon Rivers only since the mid 1990s. Populations in both of these widely disjunct areas remain extant, although somewhat reduced, suggesting a fairly stable trend statewide.

Generally, Coastal Plain Ponds on Long Island are threatened by the introduction of grass carp, alterations to hydrology and water quality, as well as herbicides used to clear aquatic weeds from ponds. The most significant threat to their hydrology comes from commercial and residential development causing increases in the demand for fresh water. This causes drawdowns of the water table, altered hydroperiods and a general diminishment of the pond extent (NYNHP 2011). The expansion of Phragmites and decline of water quality due to increased recreation during the dragonfly flight season are possible threats at the two inhabited Coastal Plain Ponds. It is unclear what threats may be a concern at the Hudson/Schroon River locales. In general, lotic habitats for this sand-dependent species could be altered by dams which change the sedimentation dyamics of flowing waters.

The most important management concern for Coastal Plain Ponds is the maintenance of a natural hydrologic regime and good water quality. Water supplies for new development and ditching, draining or impoundment activities should be weighed carefully. Storm water run-off, herbicide and pesticide use should also be minimized or eliminated in the vicinity of ponds. Where practical, wide (> 100') vegetated buffers should be managed to reduce storm-water, pollution, sediment and nutrient run-off. Habitat alteration within the wetland and surrounding landscape should be minimized (NYNHP 2011).

Because the northernmost localities across this species' range (Wisonsin to Maine) lie along nearly the same latitude, an understanding of the factors limiting the northward extent of populations could illumninate reasons why Sanddragons are so rare in New York. Further habitat research at the occupied sites on Long Island may allow more insight into why the great majority of seemingly similar Coastal Plain ponds remain uninhabited, especially because the species is quite common on the Coastal Plain in southeastern Massachusetts (Carpenter 1991; Nikula et al. 2003). During the NYDDS (White et al. 2010) two unconfirmed records were reported that could use follow-up searches: 1) the Bog River in extreme southeast St. Lawrence County; and 2) the confluence of the Mohawk and Hudson Rivers.

Both lentic and lotic habitats are occupied in different parts of New York. On Long Island, the species is found exclusively at two Coastal Plain Ponds. One of them is a large, round, sandy kettle with a shallow shoreline. At this location there are extensive Phragmites beds along most of the shoreline, with sparse areas of native emergent vegetation and little or no floating vegetation. A sandy swimming beach is maintained on the west side, near where the dragonflies were observed. The other occupied pond is a small, shallow, sand-bottomed pond with shrubs, woods, sedges (Juncus) and Phragmites. On the upper Hudson and Schroon Rivers the species occupies an area of moderate flow, with sandbars and very few boulders. The larvae are burrowers in fine sand found primarily on shifting sandbars, and beaches (White et al., 2010).

New York lies along the northeastern range extent of this species and here it has a disjunct distribution. A few Coastal Plain Ponds are known to be inhabited in Suffolk County, while the only other known breeding population is in the upper Hudson watershed in the southern Adirondacks.

The distributional center of the Common Sanddragon lies along the Ohio River in southern Illinois. This species ranges widely across the eastern U.S., west to Colorado, northwest to northern Wisconisn, east to the Maine/New Hampshire border and south to Florida and Texas.

This is a medium-sized (2") greenish-yellow clubtail, with a handsomely striped or mottled brown thorax. The abdomen has yellow dorsal patches and whitish lateral spots with a moderate terminal club. The wings have yellow leading edges and brown basal spots, the legs are short and dark brown and the eyes are grayish-green (Nikula et al. 2003; Jones et al. 2008).

The habit of perching on the ground, as well as the combination of basal brown wing spots, a mottled thorax and short legs distinguishes this species from most other clubtails.

Nymphs tunnel along just beneath the sand, leaving obvious meandering trails like miniature mole tunnels and are a reliable indicator of this species' presence. Adult Sanddragons light on the ground on sunny exposed beaches, with the abdomen raised slightly. Females oviposit along the shores of ponds or in relatively quiet stream riffles, by dunking their abdomens in water and releasing individual eggs (Carpenter 1992). Unlike many other clubtails, this species does not readily perch in trees or shrubs (Jones et al. 2008).

Larvae emerge on the upper Hudson around mid-June, while on Long Island the adults are mostly observed during July. The flight season in New York seems to be significantly earlier than in other northern states where the species is often observed throughout August and the only adults ever observed in the southern Adirondacks (mid 1990s) were seen at the end of July (White et al. 2010).

The time of year you would expect to find Common Sanddragon reproducing and larvae present and active in New York. 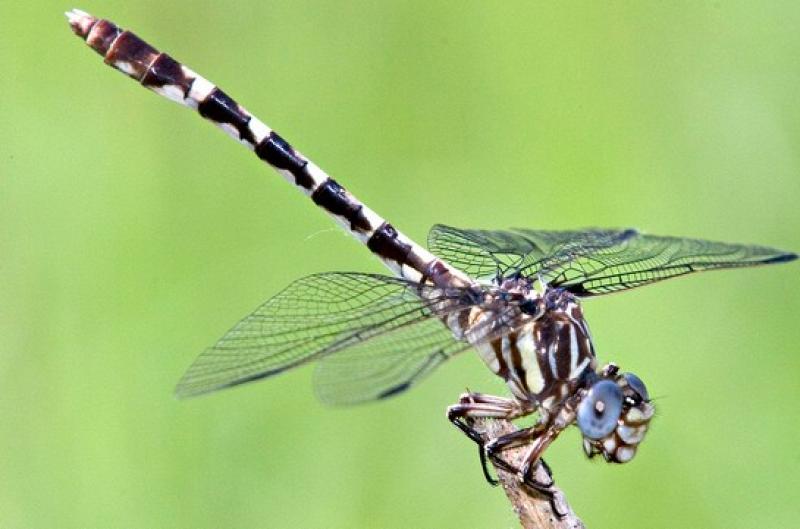 Jones, C.D., A. Kingsley, P. Burke, and M. Holder. 2008. Field guide to the dragonflies and damselflies of Algonquin Provincial Park and the surrounding area. The Friends of Algonquin Park.

Information for this guide was last updated on: May 16, 2011