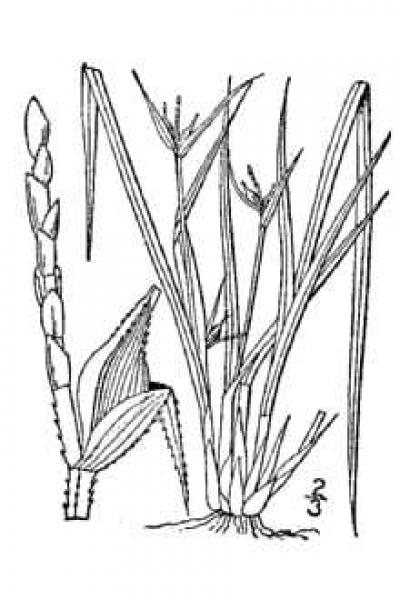 This species is named for Edwin James (1797-1861) who discovered this plant. Carex jamesii is part of a complex of three species, the other two, C. juniperorum and C. timida, were only recently described (1993 and 2001 respectively).

There are 13 known populations in New York, and at least an additional eight historical sites. This sedge is limited to calcareous areas of central/western New York. It does appear to be threatened by invasive species and does not respond well to logging as other sedges are able to do.

Most of the extant populations have only recently been discovered. Since most Carex species seem to get overlooked and often have a short season when they are easy to identify, it is very probable that these recently discovered populations have simply been overlooked in the past. Therefore, no short-term trend is evident.

Potential and current threats to this sedge include trampling and grazing by livestock, invasive species, and logging.

Control of exotics, in particular Alliaria petiolata (garlic mustard) and Lonicera morrowii (Morrow's honeysuckle), is needed. While many sedges respond positively to logging, Carex jamesii does not. This is particularly true when logging introduces or further aids exotic species.

This sedge is limited to the calcareous areas of central and western New York, particularly the Genesee River region and along the Onondaga Escarpment. It also appears to occur in Jefferson County.

Carex jamesii occurs from northwestern New York west to southern Ontario, southern Wisconsin, and southeastern Minnesota south to western South Carolina, northern Alabama, northern Mississippi, Arkansas, and eastern Oklahoma. It is very common in most of this range except east of Ohio, Kentucky, Tennessee, and Alabama where it is rare (Naczi and Ford 2001).

A densely tufted grass-like plant, this sedge has deep-green leaves that are 1.2-3.5 mm wide. The leaves are up to 59 cm long. The flowers and fruits are borne as clusters (spikes) 6.4-15.7 mm long at the tip of stalks that are slightly to much shorter than the leaves. Although the spikes are relatively small and inconspicuous they should be sought for positive identification.

This densely cespitose perennial Carex has leaves that are flat to barely plicate and 1.2-3.1(-3.5) mm wide. Reproductive shoots produce one terminal spike on culms 5.7-41 cm tall, which are dilated at their apex. At the base of the culms (0-)1-3 lateral spikes are produced on peduncles 2.7-14 cm long, which are also dilated at their apex. Spikes are androgynous with 3-13 staminate flowers and (1-)2-3(-4) pistillate flowers per spike. There are no bracts subtending the spikes. The proximal-most pistillate scale of the terminal spike is leaflike and 1.2-11.9 cm long and 1.4-3.0 mm wide at the base. Perigynia abruptly taper to a distinct beak.

This species is most easily identified when it has immature to mature fruits. Collected specimens should include the entire plant including roots, leaves, and fruit.

The species is in fruit in New York from late May to late July. By July most fruits have shed making identification harder. The best time to survey for this species is late May through June.

The time of year you would expect to find James' Sedge fruiting in New York. 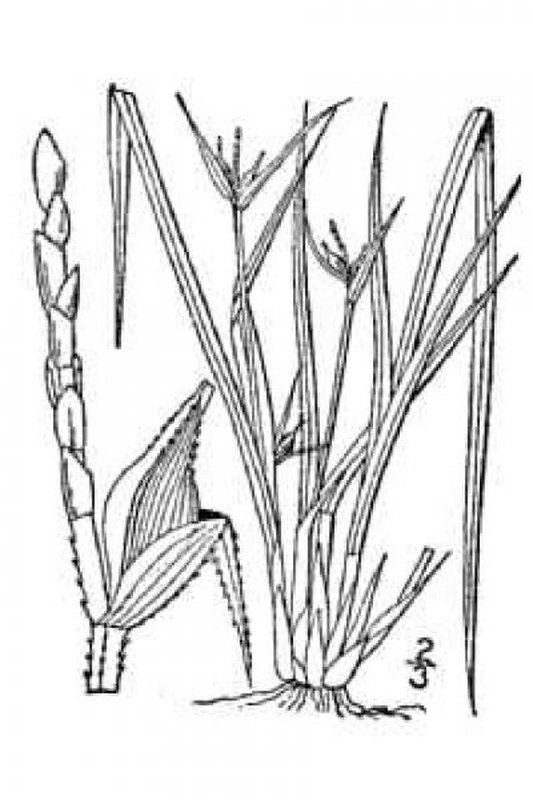 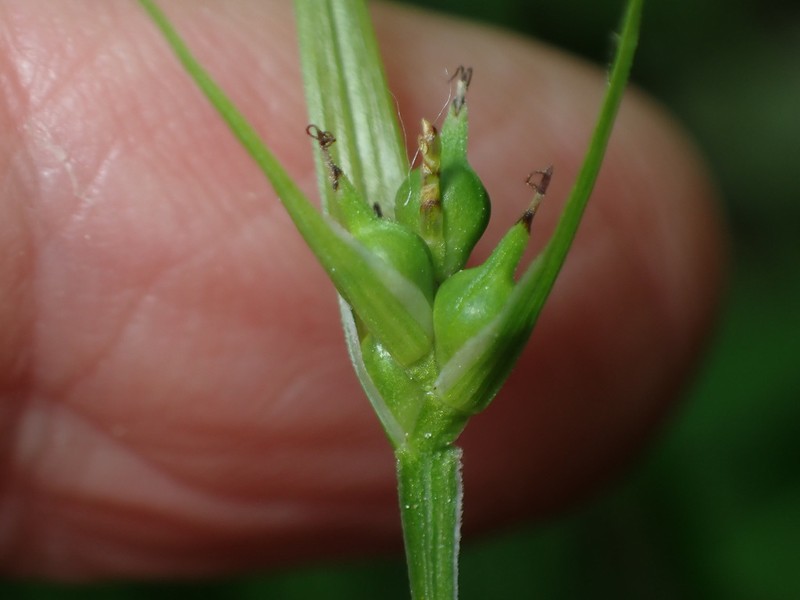 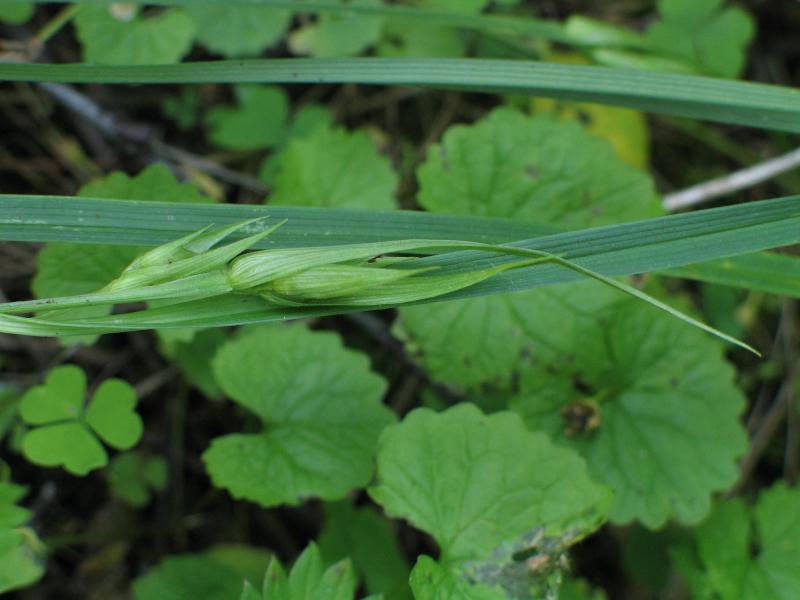 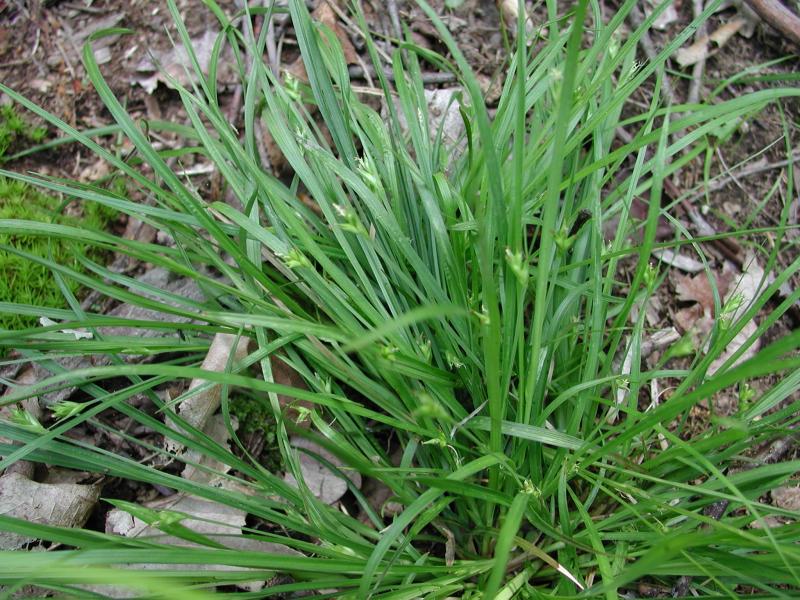 Recent work has determined that there are two additional previously undescribed species (C. juniperorum and C. timida) in the C. jamesii complex. Carex juniperorum which was described in 1993 is highly localized in distribution, known from only three disjunct areas (southeastern Ontario, southwestern Virginia, and southern Ohio to adjacent northeastern Kentucky). The Ontario sites are close to New York and there is some possibility that C. juniperorum will be discovered in New York. Carex timida which was described in 2001 occurs south and west of New York (Catling et al. 1993, Naczi and Ford 2001).