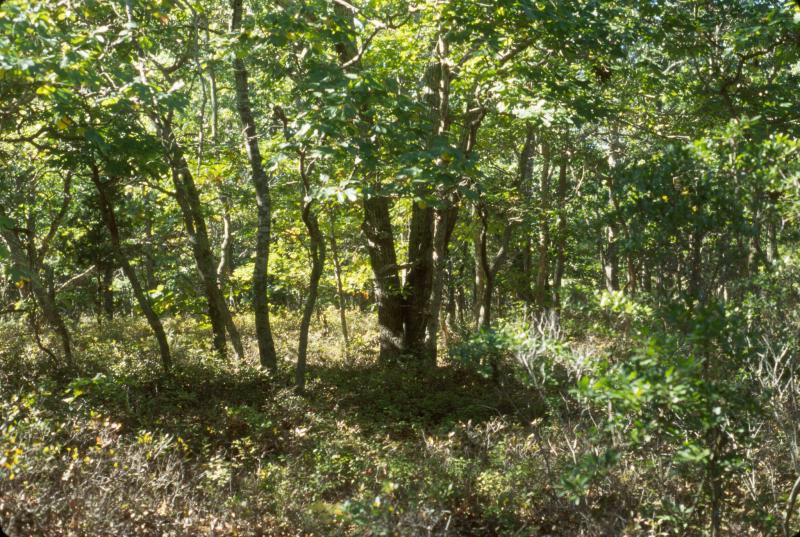 Post oak (Quercus stellata), a dominant canopy species of maritime oak communities occurs at the northern part of its range in New York. The common name of this tree comes from the fact that it is rot resistent in soil and thus has been used widely for the construction of fence posts. The specific epithet, "stellata," refers to the stellate, or star-like radiating hairs on the under side of the leaves. These hairs can be observed if the leaves are examined with a hand lens.

There are about 50 to 100 occurrences on Long Island. A few documented occurrences have good viability and several are protected on public land or private conservation land. This community has a very limited distribution in the state and includes a couple large, high quality examples. The current trend of this community is probably stable for occurrences on public land, or declining slightly elsewhere due to moderate threats related to coastal development pressure.

The number and acreage of maritime oak forests in New York have probably declined moderately in recent decades as a result of clearing for agriculture and other coastal development.

The number and acreage of maritime oak forests in New York have probably declined substantially from historical numbers likely correlated with clearing for agiculture and other coastal development.

Threats to maritime oak forests include changes in land use (e.g., clearing for development, excessive logging), forest fragmentation (e.g., roads, railroads), and invasive plant species. Other threats may include over-browsing by deer, recreational overuse (e.g., trails, ATVs, horses), and trash dumping. The loss of maritime influence (e.g., salt spray, sand deposition, etc.) may alter the structure and composition of this community and threaten its long-term viability.

Management should focus on activities that help maintain regeneration of the species associated with this community. Deer have been shown to have negative effects on forest understories (Miller et al. 1992, Augustine and French 1998, Knight 2003) and management efforts should strive to ensure that regenerating trees and shrubs are not so heavily browsed that they cannot replace overstory trees. Encourage selective logging in areas that are under active forestry.

Inventory any remaining large examples on Long Island. Continue searching for large sites in good condition (A- to AB-ranked).

Maritime oak forest communities occur very near to the ocean shore, often within 200 m, on the edges of salt marshes or on exposed bluffs. The canopy is dominated by oak species (Quercus alba, Q. coccinea, and Q. veluntina), and contains post oak (Q. stellata). The trees, particularly on the most exposed edges of the forest community, may be stunted, flat-topped, and multi-stemmed, due to the influences of high winds and salt spray from the nearby shoreline. The understory is often dense, with a thicket of briers (Smilax glauca, S. rotundifolia), bayberry (Myrica pensylvancia), black huckleberry (Gaylussacia baccata), and saplings of black cherry (Prunus serotina). The herbaceous layer is sparse, and often dominated by wavy hair grass (Deschampsia flexuosa).

An oak-dominated forest, that borders salt marshes or occurs on exposed bluffs and sand spits within 200 m of the ocean. Trees closest to the shore are often stunted, flat-topped, and multi-stemmed due to the stresses of high winds and salt spray. The understory is dense, sometimes forming a thicket of briers, bayberry, black huckleberry and black cherry saplings.

During the growing season, a common shrub of martime oak communities, bayberry, produces spicy-smelling fruit. These berries persist on the branches, and can be observed throughout much of the year. 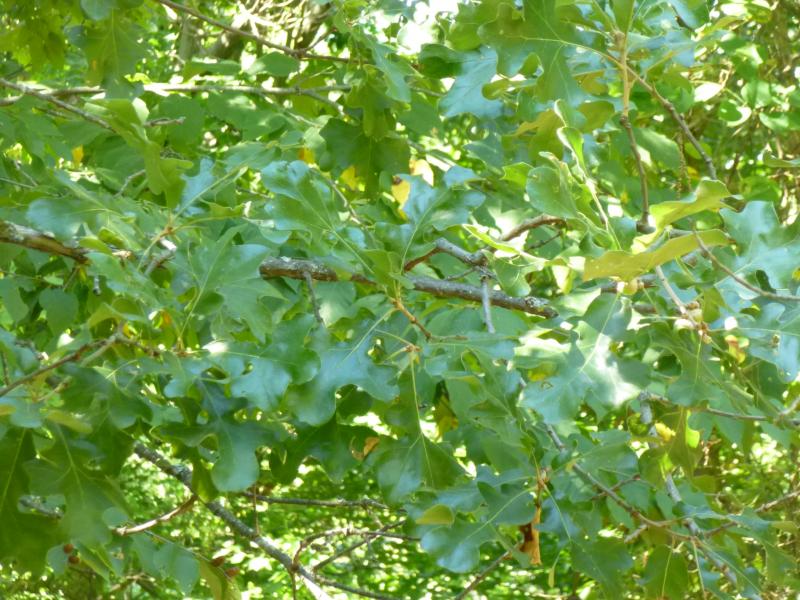 This figure helps visualize the structure and "look" or "feel" of a typical Maritime Oak Forest. Each bar represents the amount of "coverage" for all the species growing at that height. Because layers overlap (shrubs may grow under trees, for example), the shaded regions can add up to more than 100%.