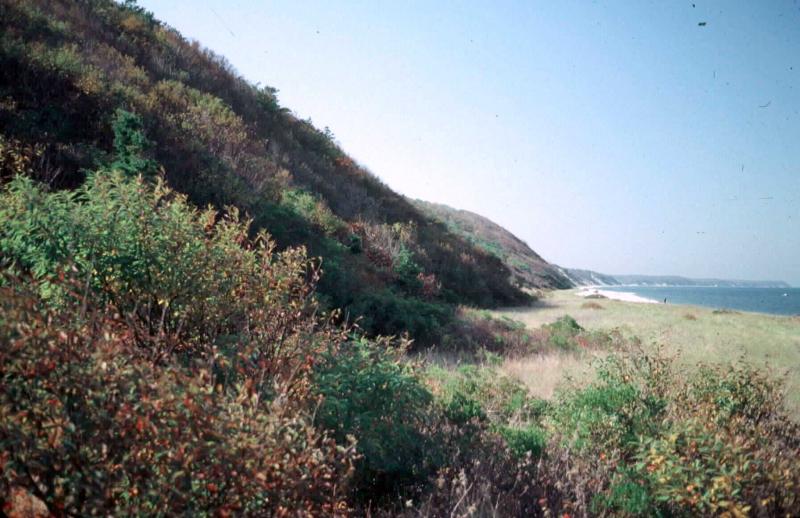 Beech by the beach! This natural community is a hardwood forest with American beech (Fagus grandifolia) dominant. It occurs on north-facing exposed bluffs adjacent to the beaches of the north shore of Long Island. The trees are sculpted by salt spray. They can occur contorted and stunted as the salt spray "prunes" them.

There are very few occurrences of maritime beech forests in New York State. These forests only occur as narrow bands (strand forests) on steep, north facing bluffs and dunes on the north shore of Long Island. Less than five sites are known in the State. Only one of these sites has adequate protection.

The numbers and acreage of maritime beech forests in New York have declined in recent decades due to cultural displacements. Residential and commercial development, as well as trails, and roads through the natural community have led to a steady decrease in the size of this community.

The numbers and acreage of maritime beech forests in New York have declined from historical numbers. Settlement of the area and the resulting residential, agricultural, and commercial developments have led to this decline.

The threats to the maritime beech forest are many and varied. Possibly the greatest threat is an increase in trails and sand roads through the community created by hikers and/or off road vehicles (ORVs) that are used for access to adjacent beaches. The increased use of these trails and roads results in an increase in erosion thereby reducing bluff size and ultimately forest size. Trails and sand roads also act as conduits for invasive species. Deer browse is also a threat affecting regeneration of dominant canopy tree species.

Management activities should include establishing a natural buffer of coastal-oak forest inland. Reducing or eliminating use of beach access trails and sand roads, especially those that are perpendicular to bluff slope, to allow for revegetation. Monitoring exotic plant species noted in the surrounding landscape including bittersweet (Celastrus orbiculatus), multiflora rose (Rosa multiflora), honeysuckle (Lonicera japonica), Japonese barberry (Berberis thunbergii), and others.

Soils are primarily sand in and around this community and the effect of clearing and construction on erosion must be considered during any development activities. Similarly, these soils are nutrient-poor and any soil enrichment activities (septic leach fields, fertilized lawns, etc.) have a high probability of altering community structure and function. The stunted American beech-dominated structure of this community is maintained by wind, salt spray, and natural dune movement. These factors need to be considered with any development plan.

Determine direction and rate of erosion of bluffs plus intensity and frequency of erosion events. Accurately map and refine the boundaries of this community and determine where it grades into other natural community types. Determine tree age and obtain more data on characteristic animals.

Research is needed to better define the composition of this community on Long Island. Collect sufficient plot data to support this classification.

Maritime beech forests are currently known only from the town of Riverhead, Suffolk County, Long Island. Historically, they may have occurred along the north-facing coastal bluffs and back-dunes of Long Island in Suffolk and Nassau County.

This community is restricted to maritime bluffs and backdunes dominated by American beech (Fagus grandifolia). It is naturally restricted by available habitat on Long Island, New York. This natural community is related to maritime oak-beech forests of Massachusetts, New York, and New Jersey, but differs in the striking dominance of American beech and the absence of many of the other characteristic species. There are fewer than five known examples of this natural community (NatureServe 2009).

Maritime beech forests are hardwood forests with American beech (Fagus grandifolia) dominant that usually occurs on north-facing exposed bluffs and the back portions of rolling dunes in well-drained fine sands. Black oak (Quercus velutina) and red maple (Acer rubrum) may be present at low density. Occurrences are often associated with coastal oak-beech forest. Wind and salt spray cause the trees to be stunted (average height 4 m to 15 m) and multiple-stemmed with contorted branches, especially on the exposed bluffs. Trees are notably taller on the more protected dunes. Shrub, vine, and herb layers are not well developed. A characteristic vine is common greenbrier (Smilax rotundifolia).

A hardwood forest with American beech (Fagus grandifolia) dominant that usually occurs on north-facing exposed bluffs and the back portions of rolling dunes in well-drained fine sands. Wind and salt spray cause the beech trees to be stunted (average height 4 m to 15 m) and multiple-stemmed with contorted branches, especially on the exposed bluffs.

Known examples of this community have been found at elevations between 1 feet and 200 feet.

A good time to see this forest is in the fall, when American beech trees are starting to turn color and the associated parasitic plant known as beech drops is flowering. The flowers of this overlooked plant are described as yellowish white, reddish, or brown, scattered on the sides of a series of thin stalks. Migrating landbirds can also be seen at this time of year in this natural community. 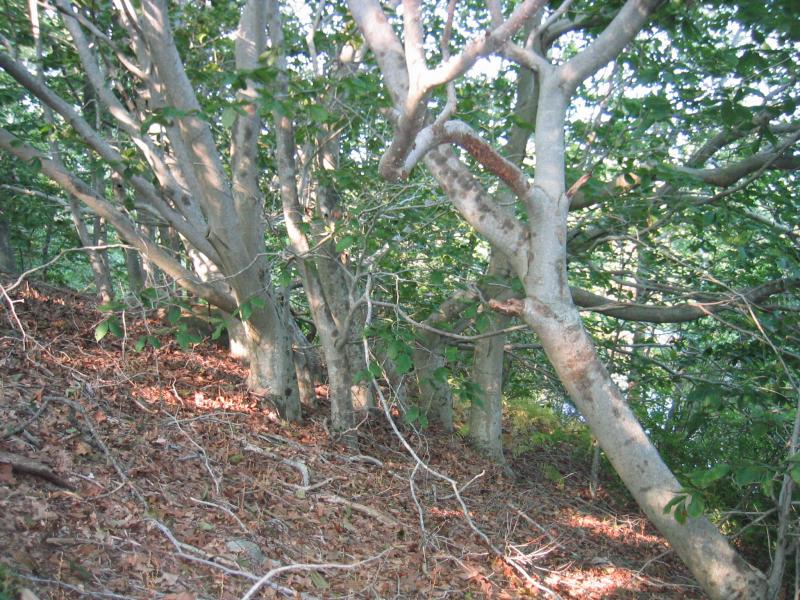 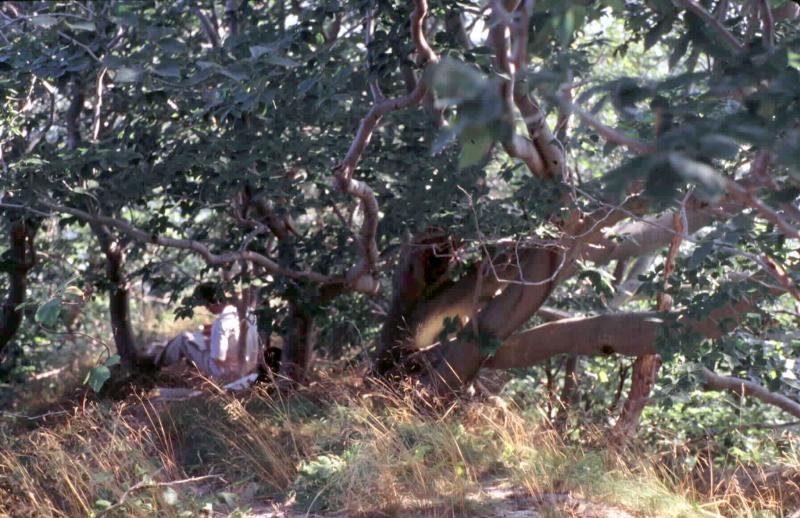 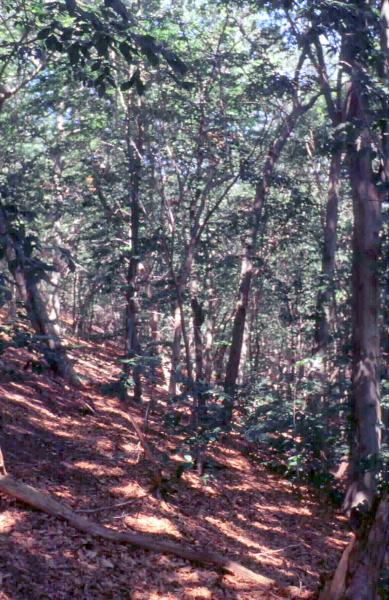 This figure helps visualize the structure and "look" or "feel" of a typical Maritime Beech Forest. Each bar represents the amount of "coverage" for all the species growing at that height. Because layers overlap (shrubs may grow under trees, for example), the shaded regions can add up to more than 100%.

Information for this guide was last updated on: July 19, 2022