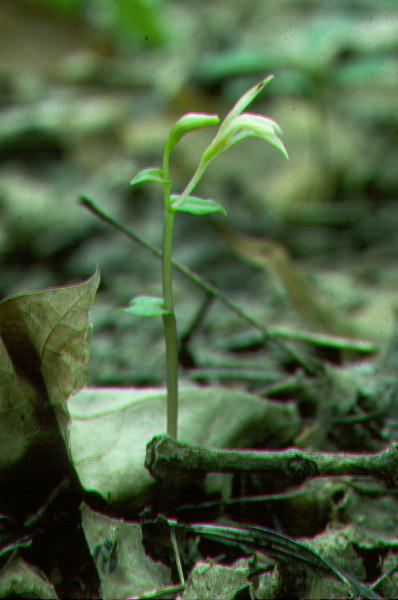 A population of this orchid was recently found in Cayuga County at the exact spot where it was previously collected in 1919. It may be underreported in the state because the time when it is blooming and visible is so short (typically the whole population flowers synchronously, and flowers last only one day) and it may not bloom every year. The flowers do not have nectar and may bloom all at once to ensure pollination before the pollinators learn to avoid flowers with no reward. According to one botanist, this synchronicity apparently extends over great areas, because during 1990 Triphora was observed flowering on the exact same day in New Hampshire, Maine, and Massachusetts.

There are nine existing populations but two of them are small. This plant is very difficult to survey because of the limited time it blooms so it is expected that more populations will be found. There are 37 historical populations.

Numbers of plants are probably stable but only a couple of occurrences have been monitored over the short term. The flowering biology of this plant makes it difficult to assess trends.

There are many more historical records than current known locations so it appears that this orchid has been declining. However, populations are difficult to survey because the window of opportunity to see the plants is so small.

No current threats are known for this species since little is known about their natural history here. Populations occur in areas where there is little development.

Sites should be monitored to determine threats and health trends.

Research is needed to determine the factors affecting bloom time and frequency. The effect of deer browse, if any, should be studied. Physical and chemical parameters of their preferred sites should be studied to help locate additional populations.

This orchid is currently known only from Zoar Valley (western New York), Tonawanda Creek drainage, and the Catskill Mountains. Historical records have been documented from scattered locations around the state. More populations than are known are likely present within the state.

This is a small, attractive orchid with a very short bloom time. The purple to green stems are 10-30 cm tall and nodding at first but straighten out as they grow. A few small, clasping, oval, green leaves can be seen along the stem which is topped by 1-3 white tubular flowers with magenta edges. The flowers turn a pinkish color as they age. The triangular lip curves down and is surrounded by four forward-facing petals.

An ephemeral orchid with purple to green stems 10-30 cm tall from a cluster of fleshy roots. These stems are nodding at first but straighten as it grows. The ovate leaves (1-2 cm long) are sessile on or clasping to the stem. The flowers are whitish to pale pink with magenta margins. The sepal and lateral petal are lanceolate and 1.5-2 cm long. The lip is 1.5-2 cm long with three prominent green ridges that are crisped at the tip with upturned lateral lobes.

This orchid may be identified from the stem, flowers, or fruit. Due to its rarity, only a picture is needed to verify the identify. Do not collect any specimens.

A very unique orchid that is easy to identify but difficult to find due to its very short blooming period.

This orchid blooms for a very short period sometime around the second or third week of August, with all flowers of a population blooming at the same time. These flowers usually last only for a single day. Occasionally, the blooming window is a few weeks early or late. Since this orchid is only present for a few weeks each year, or remains completely dormant during the growing season, searches can be challenging. Inventories should begin in early August with repeated visits to the search site until early September.

The time of year you would expect to find Nodding Pogonia flowering and fruiting in New York.