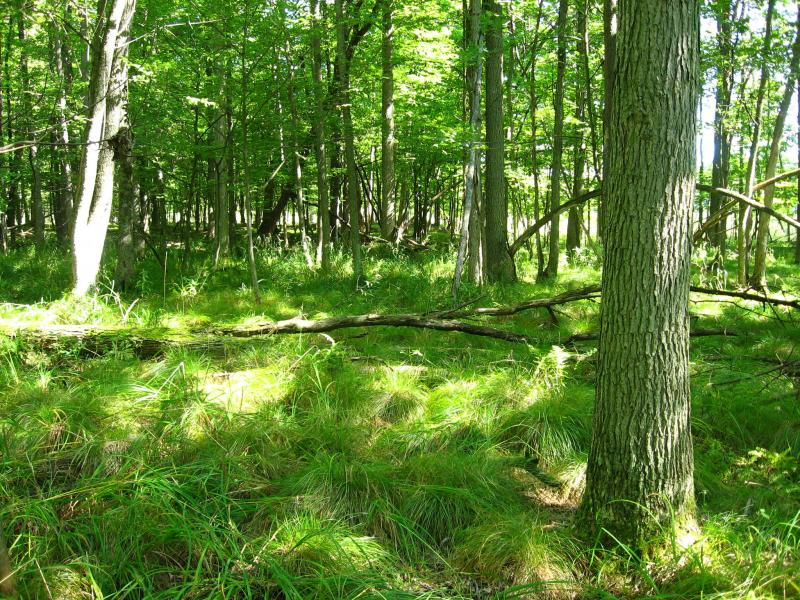 There are very few occurrences of perched swamp white oak swamps statewide. Some perched swamp white oak swamps are too small to be protected by the New York State freshwater wetland regulations. A few documented occurrences have good viability and are protected on public land or private conservation land. This community has limited statewide distribution. The current trend of this community is probably stable for occurrences on public land, or declining slightly elsewhere due to moderate threats related to development pressure and alteration to the natural hydrology, and reduced protection regulations for isolated wetlands. This community has declined moderately from historical numbers likely correlated logging and development of the surrounding landscape.

The numbers and acreage of perched swamp white oak swamps in New York have probably declined moderately from historical numbers likely correlated with logging and development of the surrounding landscape.

Perched swamp white oak swamps are threatened by development and its associated run-off (e.g., residential), recreational overuse (e.g., hiking trails, ATVs), and habitat alteration in the adjacent landscape (e.g., excessive logging, pollution, nutrient loading). Alteration to the natural hydrology is also a threat to this community (e.g., flooding or draining). Although invasive species are currently not a threat to perched swamp white oak swamps, reedgrass (Phragmites australis ssp. australis) and purple loosestrife (Lythrum salicaria) may become a problem in the future. In 2001, the federal Supreme Court ruled that the US Congress did not give authority to the US Army Corps of Engineers (US ACE) under section 404 of the Clean Water Act to regulate the filling of isolated wetlands. This decision led US EPA and US ACE officials to issue guidance in January 2003 that made it more difficult for regulators to protect isolated wetlands, such as perched swamp white oak swamps (Comer et al. 2005).

Where practical, establish and maintain a natural wetland buffer to reduce storm-water, pollution, and nutrient run-off, while simultaneously capturing sediments before they reach the wetland. Buffer width should take into account the erodibility of the surrounding soils, slope steepness, and current land use. Wetlands protected under Article 24 are known as New York State "regulated" wetlands. The regulated area includes the wetlands themselves, as well as a protective buffer or "adjacent area" extending 100 feet landward of the wetland boundary (NYS DEC 1995). If possible, minimize the number and size of impervious surfaces in the surrounding landscape. Avoid habitat alteration within the wetland and surrounding landscape. For example, roads and trails should be routed around wetlands, and ideally should not pass through the buffer area. If the wetland must be crossed, then bridges and boardwalks are preferred over filling. Restore swamps that have been affected by unnatural disturbance (e.g., remove obsolete impoundments and ditches in order to restore the natural hydrology). Prevent the spread of invasive exotic species into the wetland through appropriate direct management, and by minimizing potential dispersal corridors, such as roads.

Large high quality examples of perched swamp white oak swamp are located in the Finger Lakes region in Tompkins and Schuyler counties, but small examples are also known from Jefferson, Ontario, and Greene counties. It may occur elsewhere in the Appalachian Plateau and Taconic Highlands.

a hardwood to mixed swamp that occurs in shallow depressions located either on flat hillside steps or flat hilltops where the water table is locally perched above the surrounding groundwater level. The water level fluctuates seasonally; the swamp may be flooded in spring and nearly dry by late summer. The substrate ranges from poorly drained mineral soil to muck over bedrock.

Known examples of this community have been found at elevations between 290 feet and 777 feet.

During July, highbush blueberry (Vaccinium corymbosum) in the understory of this community bears fruit. In autumn, the foliage of the hardwood canopy species and the understory shrubs turn bright colors. 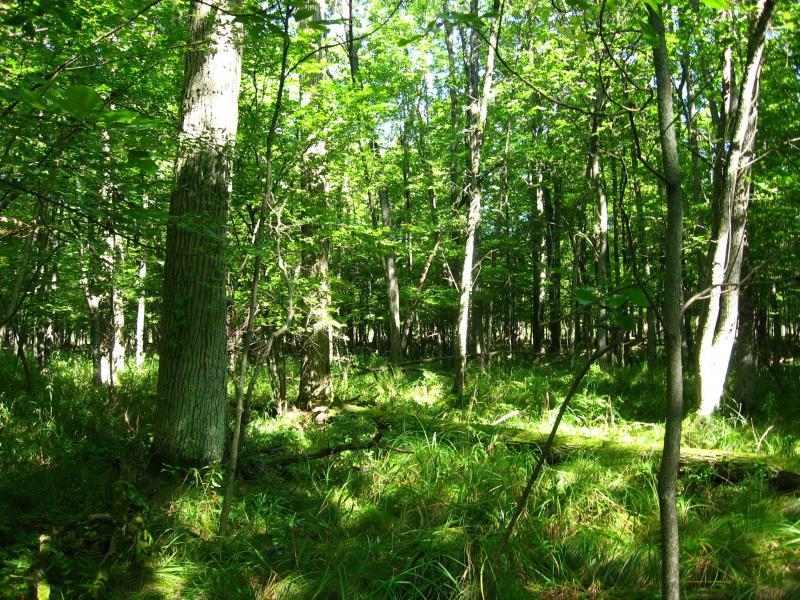 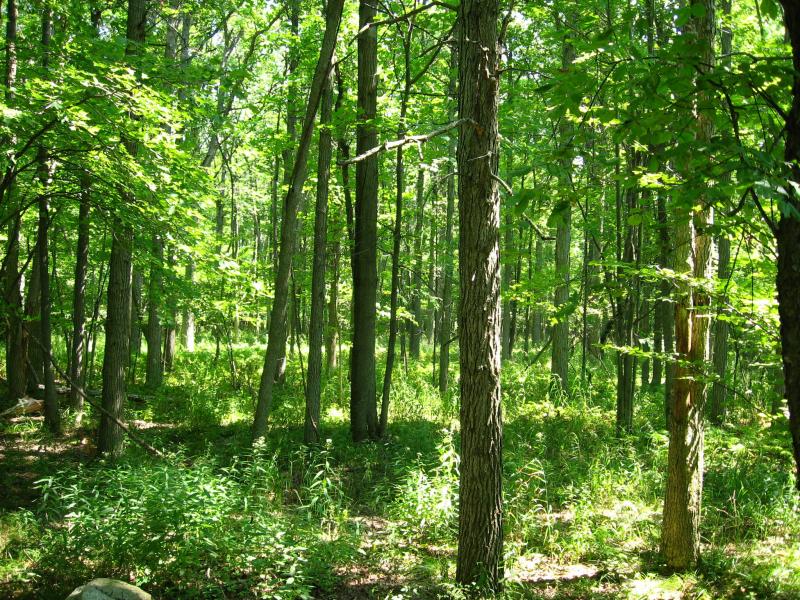 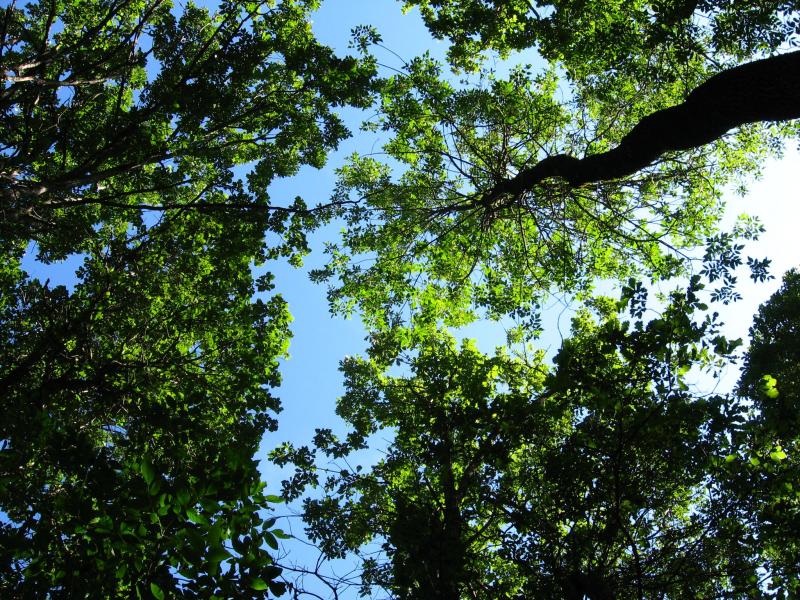 Ash and swamp white oak form the tree canopy at a swamp at Wellesley Island State Park.
Julie A. Lundgren

This figure helps visualize the structure and "look" or "feel" of a typical Perched Swamp White Oak Swamp. Each bar represents the amount of "coverage" for all the species growing at that height. Because layers overlap (shrubs may grow under trees, for example), the shaded regions can add up to more than 100%.