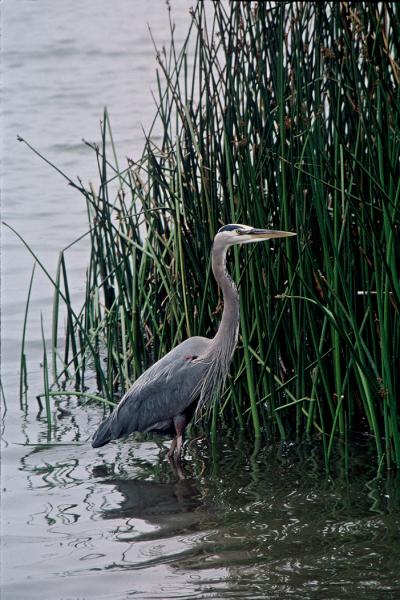 Great Blue Herons have been known to choke to death when trying to swallow a fish that is too large.

Great Blue Herons are considered a local and common breeder in upstate New York. The second Breeding Bird Atlas reported 478 confirmed breeding blocks (McGowan and Corwin 2008) representing breeding in 55 of 62 counties. The number of confirmed breeding blocks has doubled since the first Breeding Bird Atlas (Andrle and Carroll 1988 and McGowan and Corwin 2008). While populations appear to be stable, habitat loss still poses a threat to this species. At this time, New York Natural Heritage tracks rookeries with greater than 50 active nests. Most rookeries in New York have fewer than 50 active nests.

It appears that there has been an increase in Great Blue Heron rookeries between the first Breeding Bird Atlas (1980-1985) and the second Breeding Bird Atlas 2000 (2000-2005) with the number of confirmed breeding blocks increasing from 212 to 478 blocks (Andrle and Carroll 1988, McGowan and Corwin 2008). Great Blue Herons continue to nest in nearly all of New York State excluding the Coastal Lowlands (McGowan and Corwin 2008). Breeding Bird Survey analysis indicates a slight delcine of 0.7% per year between 1980 and 2006 (Sauer et al. 2007).

Great Blue Heron populations decreased during the late 1800s and early 1900s, mostly due to shooting and habitat loss. Breeding populations along the Coastal Lowlands were eliminated in New York. Populations most likely started to rebound with the recovery of beaver populations in the state. Beaver activities resulted in flooding of lowlands that provided additional nesting and foraging habitat for Great Blue Herons. A five-year study conducted with the Federation of New York Bird Clubs (currently known as the New York State Ornithological Association) to assess Great Blue Heron populations found that 41 rookeries were active for at least one year during the study period. Aerial surveys of 110 rookeries that were reported by various scientific organizations and scientists were conducted between 1972 and 1981. These surveys concluded that Great Blue Heron nesting abundance likely increased since the mid-1960s (Andrle and Carroll 1986). Breeding Bird Survey analysis indicated a population increase of 1.4% per year from 1966 to 2006 (Sauer et al. 2007).

One of the more significant threats faced by Great Blue Herons is the loss of habitat. New York State has lost over half of its wetlands since colonization (Tiner 1984 cited in NatureServe 2003). More recently, losses of wetlands in the Lake Plains portion of the state have been offset as agricultural lands revert back to wetlands, although net losses of wetlands in the Hudson Valley continue. Equally important, the quality of remaining habitat is often degraded by fragmentation, exotic plants, and nutrient enrichment (Riexinger, personal communication, October 31, 2003). During the late 1800s many species of herons were persecuted for their feathers, although Great Blue Heron populations were not as damaged by this as other heron species (Cornell Lab of Ornithology 2003). While this practice no longer continues, shooting in some areas may still pose a threat to this species.

Efforts should be made to maintain the quantity and quality of habitats where Great Blue Herons are breeding as well as nearby areas that are used for foraging. Great Blue Herons usually need several areas to forage, in order to support a rookery.

Typically, Great Blue Heron habitat includes freshwater and brackish marshes that are near lakes, rivers, bays, lagoons, ocean beaches, fields, or meadows. Nests tend to be high in the trees of swamps and wooded areas.

Currently, breeding Great Blue Herons occur throughout the state excluding the Coastal Lowlands where it is a nonbreeding summer visitor. The last known breeding record from the Coastal Lowlands was on Gardiners Island during the late 19th century (Levine 1998). Most Great Blue Herons leave New York for the winter, but some stay where open water persists. Usually, they can be found along the coast and more rarely along the shores of the Great Lakes when open water is present.

Great Blue Herons breed from southeastern Alaska across southern Canada to Nova Scotia and south to southern Mexico, the Greater Antilles, the Virgin Islands (St. Thomas and Anegada), islands off coastal Venezuela, and on the Galapagos. Non-breeding birds are found from southeastern Alaska, the central United States, and southern New England south to northern South America (mainly to northern Colombia and northern Venezuela). During the winter in the Unites States, the highest densities occur along the lower Colorado River, around the Great Salt Lake, and near Aransas National Wildlife Refuge on the Texas coast (Root 1988). They are known to wander widely outside their usual range; they have been reported a few times as far as Hawaii. Some subadults may spend the summer in their non-breeding range.

Great Blue Herons are large, gray-blue birds with long brownish or green legs and long "s"-shaped necks. They measure 97-113 centimeters (38-54 inches) in height. Their wingspan is between 167 centimeters (66 inches) and 201 centimeters (79 inches) and they can weigh 2100-2500 grams (74.12-88.25 ounces). Great Blue Herons have a white forehead with a black stripe that extends above the eye and a white foreneck streaked with black. The bill is thick and yellowish. Eyes are yellow. During the breeding season, adults have ornate plumes on their head, neck, and back. Non-breeding adults do not have ornate plumes and their bill is more yellow. Sexes are similar. Juveniles have a black crown without ornate plumes. Great Blue Herons typically nest in colonies, also known as heronries or rookeries, but can also be solitary nesters. Nests vary in size from 0.5 meters (19 inches) across to 0.9-1.2 meters (3-4 feet) across. They build their nest out of sticks and line the shallow depression with fine twigs, moss, pine needles, or grass. The birds continue to add materials to the nest during incubation through rearing their young. Nests are usually 7.6-30.5 meters (25-100 feet) off the ground. Eggs are a dull, pale blue. The clutch size is typically 2-6 eggs. The Great Blue Heron call is a deep, hoarse croak ("frahnk, frahnk, frahnk").

Great Blue Herons are usually present in New York year-round, but are more abundant during their breeding season from mid-April through the end of July. Generally, they tend to be crepuscular, but they can also be active during the day and night. They can be found near areas with open water usually standing still in the more shallow areas. Winter distribution is more restricted than during other seasons and varies from year to year depending on the severity of the winter weather and availability of open water.

The time of year you would expect to find Great Blue Heron active and reproducing in New York. 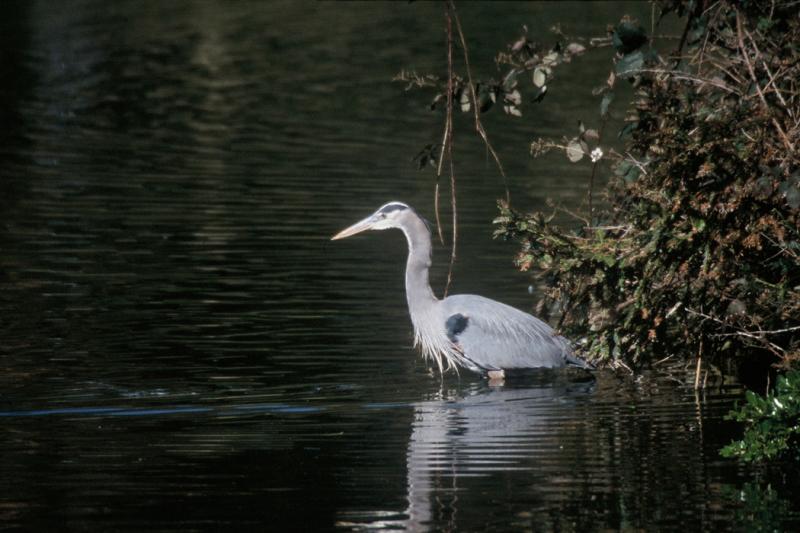