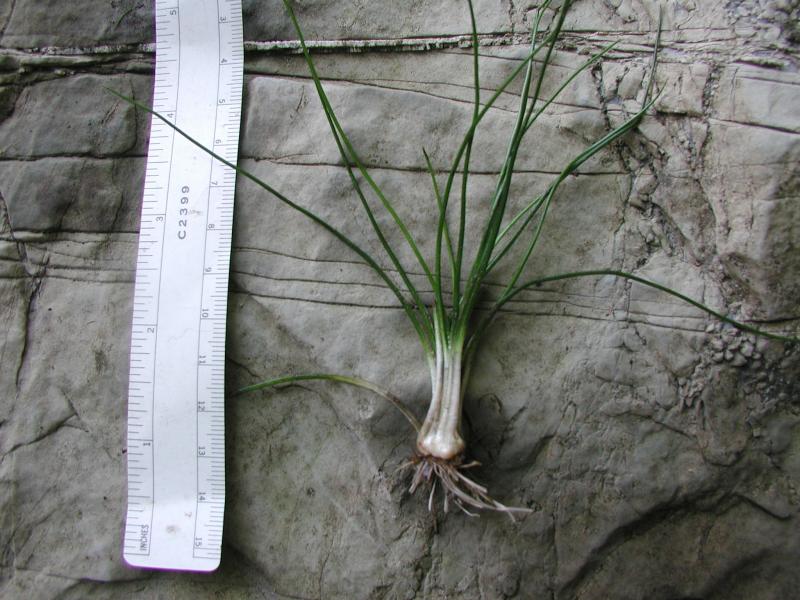 Nearly all quillwort species are notorious for their promiscuity. This causes identification and problems, and results in difficulties in understanding the relationships between species. Most Isoetes species are able to cross with at least one other Isoetes species, forming both fertile and sterile hybrids. These crossings have even resulted in new species. This is a complex group that challenges how one defines a species.

As of 2005, there are two known and verified populations. A population from Mohonk Lake was last reported in the late 1970s and there is no reason to suspect that it has disappeared. There are also reports of large populations on the Vermont side from the northern portion of Lake Champlain. In the early to mid 1900s, many populations were reported along the Hudson River but these appear to have completely disappeared. There are also historical records from the St. Lawrence Seaway that have not been observed in many years. This species may have been negatively impacted by water quality degradation, or this is a much overlooked species.

This plant was likely much more common throughout the state when the waterways were more pristine. As these waterways have been impacted, there is a high likelihood that populations of this plant were lost. Few early botanists concentrated on aquatic species, so there is not a lot evidence to support this claim. At this time, this negative long-term trend is very speculative.

Certain populations of this plant have been negatively impacted by pollutants, run-off, boat traffic, and other changes to their associated waterways. Some populations are most insulated from these activities and have very few threats. The areas under the greatest threats (e.g. Hudson River) have seen the greatest decline in populations.

At this time, the management needs for this species are not well known. These needs would presumably include maintaining and protecting the high quality waterways where this plant is found.

More work is needed to determine this species habitat requirements. There is also a report of Isoetes acadiensis from the Adirondacks; however, since this keys out so close to Isoetes riparia, the specimen should be verified by another expert. Studies to determine the impacts of water quality changes should also be investigated. This would allow for a better understanding of the management needs for this species.

There is one known population from the Taconics and another along the Delaware River. A population was reported from Mohonk Lake (Shawangunk Mountains), but this has not been verified since the late 1970s. Based on its presence on the Vermont side, there are reasons to believe that this plant could be found in the northern portions of Lake Champlain. Historically this was relatively abundant along the Hudson River and at scattered locations along the St. Lawrence Seaway.

This aquatic plant ranges from southern Quebec and Ontario, south through eastern New York and western New England, down to the coastal plain of North Carolina.

This amphibious plant has dark, green and stiff leaves. The "fruits" or megaspores are found near the base of the leaves within bulbous pouches. A study of the spores under magnification reveal interesting spheres with ridges and craters. The best way to identify any of the quillworts is by studying the differences in these ridges and craters.

This plant in considered amphibious, found mostly in submerged aquatic settings but also known from shoreline areas where the roots may be in wet soil and the leaves are fully exposed to the open air. The leaves are bright green, 10-35 cm long (rarely to 50 cm long). These leaves are mostly without peripheral strands and with stomata present. The sporangia are oblong, 4-7 mm long. The spores bear conspicuous jagged crests with sharp distinct or slightly confluent peaks.

Most Isoetes are difficult to identify and this species is no exception. To ensure proper identification, mature megaspores are required. Due to the small size of these spores, a voucher specimen should be collected.

Vegetative stems are present from late June to early October. As the season progresses, floating plants may be encountered. Mature spores should be present in August and September, and even to October. This is when surveys should be conducted. Mature spores are necessary to properly identify this species and could persist into October.

The time of year you would expect to find Riverbank Quillwort fruiting in New York. 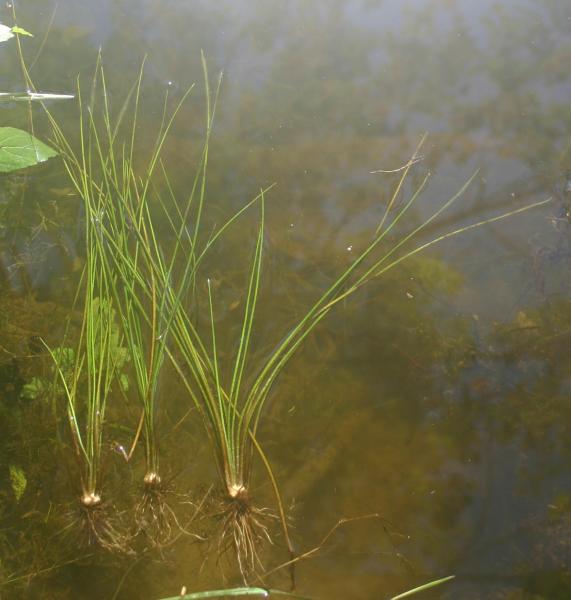 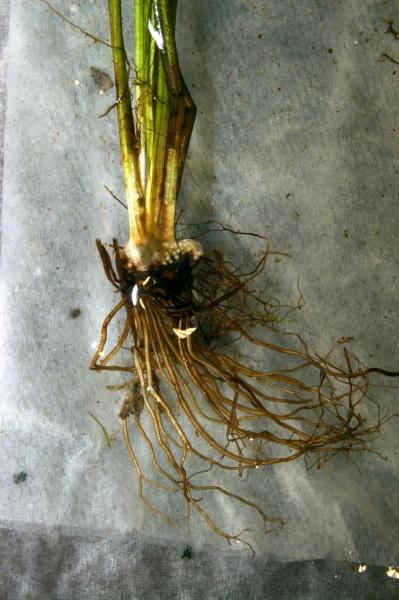 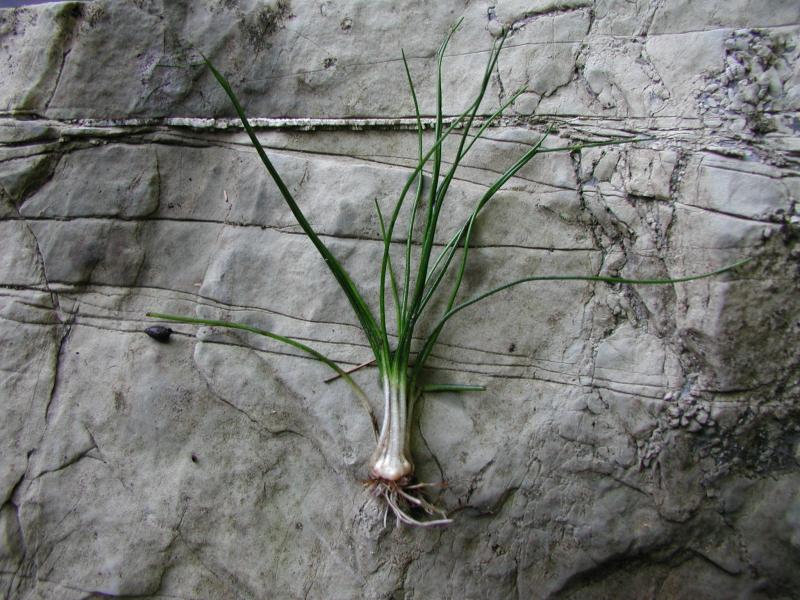 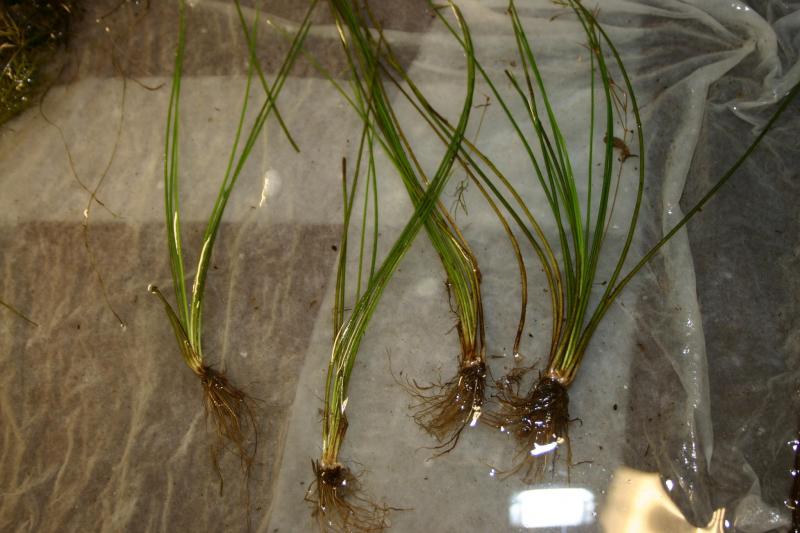 Isoetes riparia appears to be an allotetraploid (2n=44), meaning that it is a species of hybrid origin where the chromosomes doubled after the initial hybridization to produce a new fertile species. The original parents were likely Isoetes echinospora and Isoetes engelmannii. The hybrid between this two species is typically called Isoetes x eatonii. Isoetes x eatonii is the sterile hybrid between these parents, while Isoetes riparia probably resulted from the doubling of chromosomes within Isoetes x eatonii. Isoetes riparia may hybridize with Isoetes echinospora, Isoetes engelmanii, Isoetes lacustris, or Isoetes tuckermanii (Flora of North America 1993).