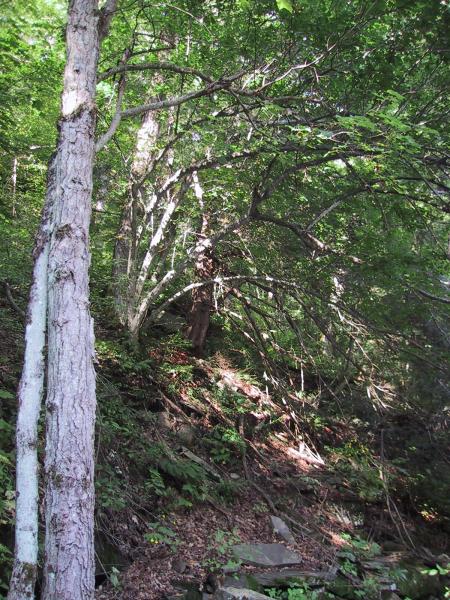 What is talus? Talus, or scree, is a steep slope usually found at the base of a mountain. The block size of the talus is strongly influenced by the type of rock forming the cliff face and the rate of erosion; for example, shale or rapidly eroding sandstone forms unstable, small, loose talus. The unstable nature of shale results in uneven slopes and many rock crevices. Other rocky types, such as hard dolostone caprock, produces stable, very large talus that provides habitat for much larger organisms.

There are probably less than a couple hundred occurrences statewide. A few documented occurrences have good viability and few are protected on public land or private conservation land. This community is limited to regions of the state with shale bedrock/talus outcrops, and there are very few high quality examples. The current trend of this community is probably stable for occurrences on public land, or declining slightly elsewhere due to moderate threats that include development, trampling by visitors, and invasive species.

The number and acreage of shale talus slope woodlands in New York have probably declined slightly in recent decades as a result of development, trampling by visitors, and invasive species.

The number and acreage of shale talus slope woodlands in New York have probably declined moderately from historical numbers likely correlated with past development, trampling by visitors, and invasive species.

Where practical, establish and maintain a natural forested buffer to reduce storm-water, pollution, and nutrient run-off, while simultaneously capturing sediments before they reach the shale talus slope woodlands. Avoid habitat alteration along the cliff and surrounding landscape. Restore past impacts. Prevent the spread of invasive exotic species into the woodland through appropriate direct management, and by minimizing potential dispersal corridors, such as roads and trails.

A natural (usually forested) buffer around the edges of this community will help it maintain the micro-climatic characteristics that make it unique.

Survey and document more occurrences. Survey for occurrences statewide to advance documentation and classification of shale cliff and talus communities. Continue searching for large sites in good condition (A- to AB-ranked). Better document the threats to this community.

This community is currently described only from New York, it is also reported from New Jersey, Pennsylvania, and Vermont.

An open to closed canopy woodland that occurs on talus slopes composed of shale. These slopes are rather unstable, and they are usually very well-drained, so the soils are shallow and dry. The canopy cover is usually less than 50%, due to the instability of the substrate. Characteristic trees include chestnut oak, pignut hickory, red oak, and white oak. Characteristic shrubs and herbs include smooth sumac, scrub oak, penstemon, and Pennsylvania sedge.

A woodland that occurs on shallow soils of talus slopes composed of shale. Oaks and hickories are characteristic trees.

Known examples of this community have been found at elevations between 250 feet and 1,500 feet.

Because the characteristic plants of shale talus slope woodlands are deciduous trees, it is easiest to identify the community during the growing season, from late May through summer. Striking seasonal leaf color can be enjoyed in the fall. 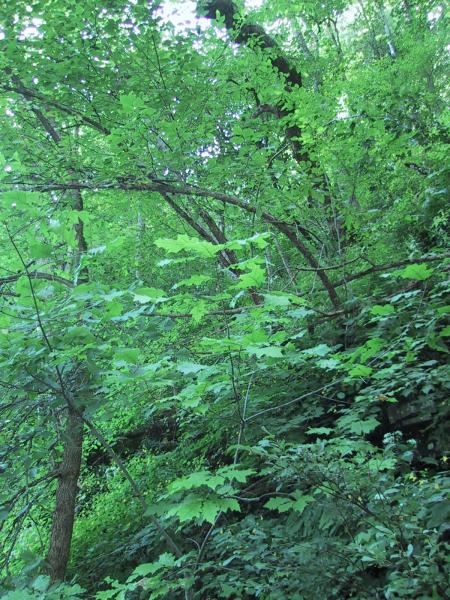 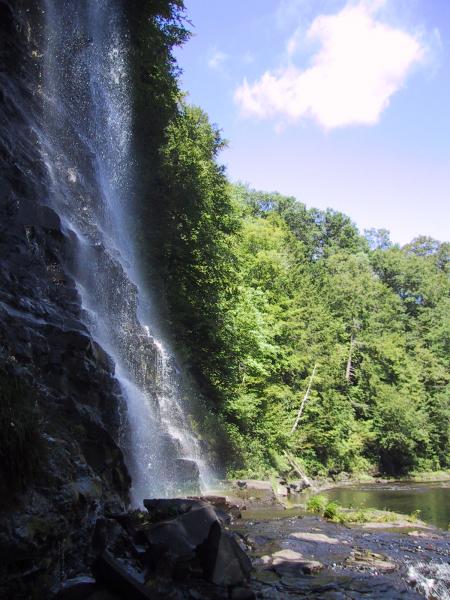 This figure helps visualize the structure and "look" or "feel" of a typical Shale Talus Slope Woodland. Each bar represents the amount of "coverage" for all the species growing at that height. Because layers overlap (shrubs may grow under trees, for example), the shaded regions can add up to more than 100%.

Information for this guide was last updated on: May 2, 2019