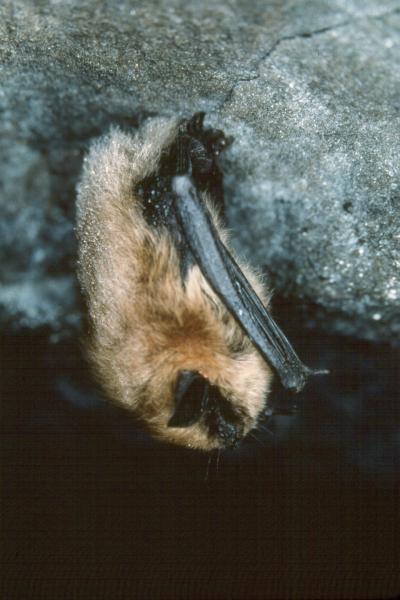 The Eastern Small-footed Myotis is the smallest Myotis in the eastern United States. It differs from other bats in that it typically roosts in rock crevices and talus, rather than trees.

Because this species often hides in crevices and may use smaller, unsurveyed hibernacula, there is significant uncertainty surrounding whether the apparent measured declines of 31% (2007-2015) are due to sampling error. It seems likely that populations are stable or declining slightly.

Prior to WNS populations were thought to be relatively stable. Trends from historic populations are unknown but this species was always likely relatively uncommon. There is a large margin of error surrounding the hibernacula surveys reporting trends of between 13% (2012) to 30% (2015) decline.

Some mines may suffer from collapse or closure and a few cave occurrences are probably threatened or reduced in quality due to the commercialization or frequent winter visitation by spelunkers. The main threat is disturbance during the winter hibernation period and, although this currently does not appear to be a major threat at the best sites (mines), it could be a problem at some of the cave sites. White-nose syndrome (WNS) may not be as big an issue for this species as for other Myotids. Although the species has been shown to get WNS, there is evidence that microbes or a physicological response may be protecting them from the disease. They are also the most cold-tolerant of the Myotis species in New York State which allows them to enter hibernacula later in the fall and emerge earlier in the spring, which may limit their exposure.
Bats may be particularly sensitive to environmental toxins including those found in herbicides and pesticides. Although no studies have targeted small-footed bats directly, elevated levels of persistent organic pollutants including especially PCBs, DDT, Chlordanes, and PBDEs have been found in a similar species, the little brown bat, in the Hudson River Valley in New York (Kannan et al. 2010). The levels found in the bats were only 1 to 3 times less than lethal concentrations reported from previous studies (Kannan et al. 2010). Lesser toxin levels may be expected in small-footed bats since little brown bats typically consume a greater percentage of prey with an aquatic life stage. Bats are highly susceptible to DDT residue and this chemical was widely used as a pesticide to control bat infestations in houses in the 1940s (USGS 2013). It was widely used as an agricultural pesticide in the 1950s and 60s until its agricultural use was banned in 1972. Since DDT is highly persistent (soil half-life is 2-15 years, aquatic half-life is about 150 years) (NPIC 1999), it can pose a threat to bats when there is exposure to trace residues in the environment (USGS 2013). Extensive applications of insecticides and some bio control methods, such as Btk, could also pose an indirect risk to northern myotis by reducing availability of prey.
If proper precautions are not used, cavers and researchers entering hibernacula may cause disturbance that rouses bat colonies or transport the fungus that causes WNS on their clothing (NatureServe 2013). Other potential threats may include climate change, commercial cave development, flooding and hibernacula collapse; habitat loss and fragmentation from development, hydraulic fracturing, and construction of new wind facilities; and direct mortality from wind facilities (U.S. Fish and Wildlife Service 2013).

Cave or mine gating should be given serious consideration at sites that may otherwise receive heavy winter usage. Fencing around openings may be sufficient at some of the more remote locations. Gates or fences will need monitoring to ensure that they remain effective. Gates over entrances must be designed in accordance with specifications that allow easy entrance by bats and do not restrict or alter air movement patterns within subterranean systems.

Determination of the percentage of the wintering population that is visible during hibernacula counts is necessary to develop population estimates and trends. Determining the summer distribution and habitat preferences of reproductive females is also a research need (New York State Department of Environmental Conservation 2006).

Small-footed bats winter in caves and mines, and openings deep within rock crevices in outcrops. The largest overwintering populations are currently known from mines in the northern part of the state. Several individuals, including a few lactating females, have been mist-netted in deciduous forests during the summer months in southeastern and central New York, but the species is likely to be more widespread in the state during the summer months. Several studies in the northeast and southeast have indicated that Small-footed Myotis roost and form maternity colonies in fractures in rock ledges and talus areas. This type of roosting behavior may contribute to the low numbers observed during winter hibernacula counts in New York because many individuals may not be readily detectable on the cave or mine walls. Instead they may hide within crevices or in piles of rubble on the cave or mine floor.

Overall, Small-footed Myotis have been recorded from approximately 26% of all sites surveyed. The species is most often recorded at hibernacula in northern New York with most of the large sites being located in the Adirondacks. Hibernacula are also located in eastern and central New York caves (Albany County, Schoharie County, Montgomery County, and Onondaga County), and southern and western New York mines (Orange County, Ulster County, Putnam County, and Livingston County). Small-footed Myotis have been captured at summer foraging locations in central New York (Onondaga County) and southern New York (Ulster County, Orange County, and Putnam County). The summer range is undoubtedly larger than what is currently recorded.

The range extends from New England, southeastern Ontario, and southwestern Quebec south and west to southeastern Oklahoma, Arkansas, northern Alabama, northern Georgia, and northwestern South Carolina (Best and Jennings 1997, Menzel et al. 2003). Within this range, the distribution is very spotty, and the bulk of the occurrences and largest populations are in New York, Pennsylvania, West Virginia, and western Virginia. This species is apparently extirpated in Connecticut and Ohio (where it is known from only one specimen). The elevational range extends to at least 700-800 meters in several states and to at least 1,125 meters in Kentucky (see Best and Jennings 1997).

This is a very small bat with tiny feet. Measurements are as follows: total length of 72-84 mm, tail length of 30-39 mm, hind foot length 6- 8 mm, forearm length of 30-36 mm, and wingspread of 212-248 mm; the weight of an adult is 3-8 g (Banfield 1974, Godin 1977, Schwartz and Schwartz 1981, Merritt 1987). The dorsal pelage is pale yellowish brown to golden brown, the ears are black, and the face has a black mask. The tragus, a fleshy projection at the entrance to the ear, is long and pointed. There are no prominent chin or nose flaps. The belly hair varies from pale buff to whitish. The bases of the hairs on the back are blackish and the wing and tail membranes are very dark brown. The tail reaches the edge of the interfemoral membrane (the membrane that stretches between the legs of bats that is used for flight and for catching insects). The base of this membrane and the undersurfaces of the wing membranes are sparsely furred. The calcar (a cartilaginous extension of the ankle) has a definitive keel. The sexes are similar in appearance.

The combination of the small size, golden-yellow pelage, and lack of a mask make this bat readily distinguishable from other species of bats in New York. The small hind foot and long-keeled calcar are also diagnostic.

Mating behavior is similar to that of the Little Brown Bat (Myotis lucifugus) (Wimsatt 1945) and so, probably, are other facets of reproduction (Banfield 1974). Breeding may occur in the fall, with the sperm stored in the uterus over the winter. Active gestation lasts probably two months, with a single offspring born annually, probably in early July (Merritt 1987). Survival rates are significantly lower for females (42%) than for males (76%) (van Zyll de Jong 1985). One individual is reported to have lived 12 years (Hitchcock 1965). Colonies are usually small (fewer than 15 individuals), although a few number in the hundreds up to approximately 2,000.

Feeding flights are relatively slow and fluttery and often occur over ponds and streams and along roads.They are known to consume moths (Lepidoptera), true flies (Diptera), and beetles (Coleoptera) (Johnson and Gates 2007, Moosman et al. 2007). Presence of spiders (Araneae) and crickets (Gryllidae) in the diet suggest they may capture some of their prey via gleaning (Moosman et al. 2007).

Emerges from its daytime retreat shortly after sunset, while there is still some light. In the northeastern U.S., seldom enters hibernation caves before mid-November; departs by March, or possibly earlier in Vermont (Godin 1977).

The time of year you would expect to find Eastern Small-footed Myotis present, active, and reproducing in New York. 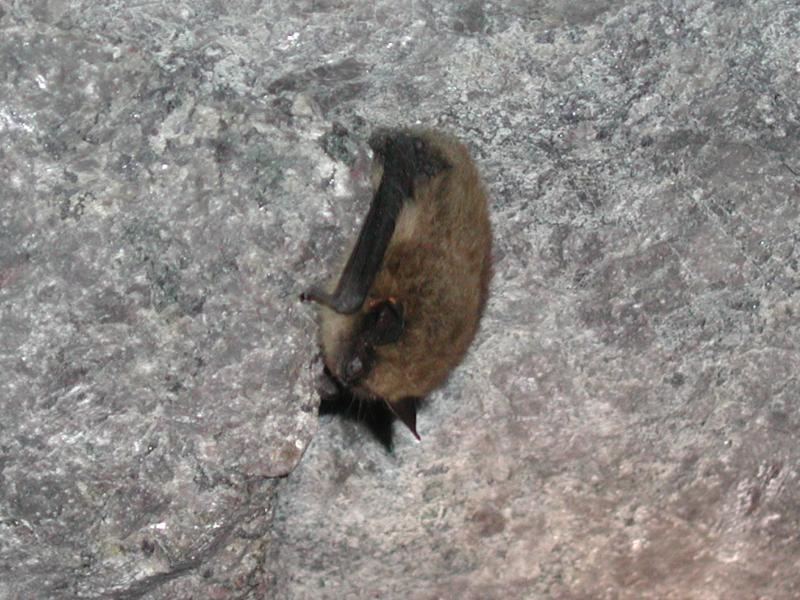 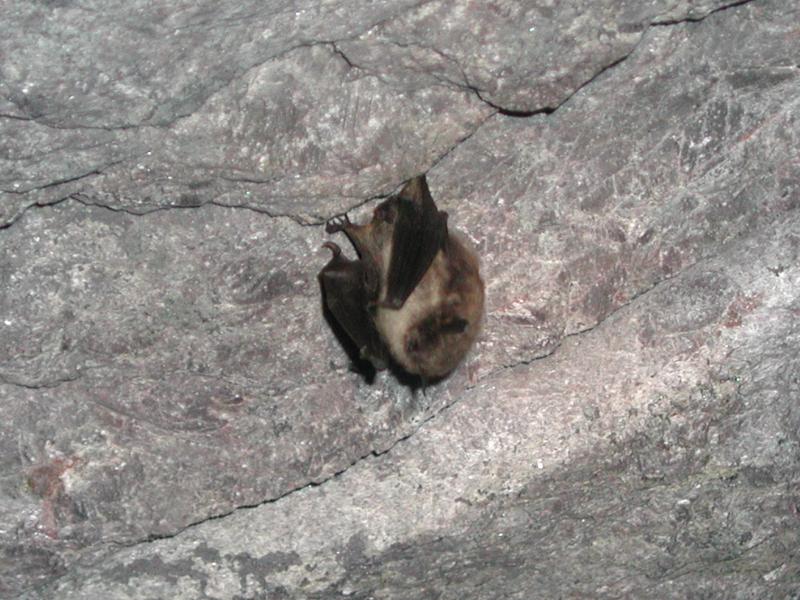 U.S. Fish and Wildlife Service. 2011. 90-Day finding on a petition to list the eastern small-footed bat and the northern long-eared bat as threatened or endangered. Vol. 76 No. 125, Department of the Interior.

Wimsatt, W. A. 1945. Notes on breeding behavior, pregnancy, and parturition in some vespertilionid bats of the eastern United States. Jounal of Mammalogy 26(1):23-33.

Information for this guide was last updated on: December 13, 2007