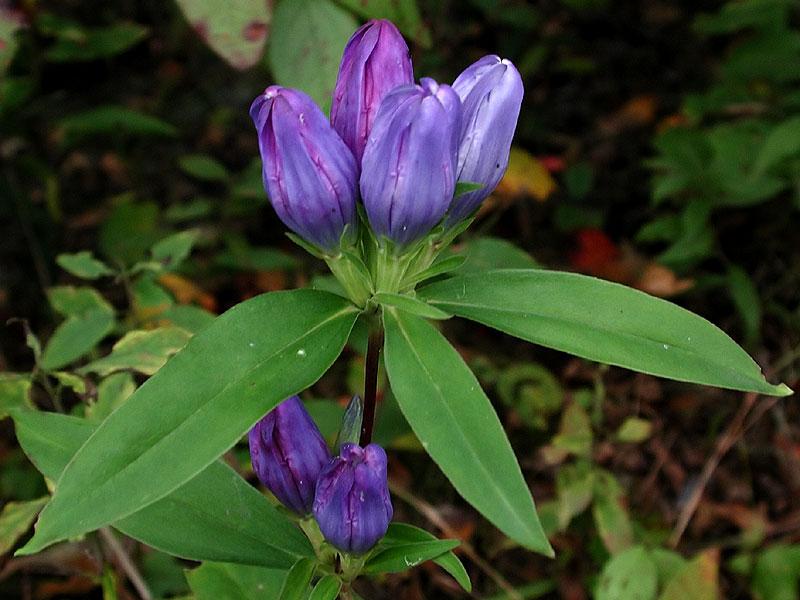 The leaves are too bitter for most herbivores to eat but that doesn't keep deer from biting off the flowers (Hilty, John 2009).

There are two existing populations on Staten Island, both with under 100 plants each. Most of the 37 historical sites have been developed.

There have not been enough recent surveys to determine the short-term trend.

There has been a sever decline of populations over the last 100 years as the western end of Long Island and New York City has been developed and wetlands have been lost.

Loss of wetland habitat is the primary threat.

The wetland habitats need to remain with an open canopy. Access to the existing populations should be restricted to prevent picking or trampling.

Research is needed into the best approach to augment existing populations.

In New York these wildflowers have been found in wet areas of successional deciduous woodlands, a freshwater swale at the border of a salt marsh, a wet switchgrass meadow, mixed mesophytic forests, a hillside fen, a shrub swamp, and damp areas of the Hempstead Plains (New York Natural Heritage Program 1998). Glades, sandy swamps, shores and bogs (Fernald 1970). Moist woods and thickets (Gleason & Cronquist 1991).

This herb historically ranged from Suffolk County on Long Island west, and north to Dutchess County. It is currently only known from Staten Island as it is now considered extirpated in the rest of New York City.

This is primarily a species of the southeastern US where it extends southwest to Arkansas and Oklahoma, where it is rare, and eastern Texas and Louisiana. It also grows south of Lake Michigan in Indiana and Illinois with a disjunct population in central Wisconsin. It is considered extirpated in Michigan and rare in Ohio. It reaches its northeastern limit in Pennsylvania, New Jersey and New York, where it is also rare.

This wildflower is 2-7 dm tall and has glabrous stems. The leaves are oblong to narrowly elliptic and ciliolate at 10X. The anthers are not divided. The calyx lobes are firm, oblong to oblanceolate, ascending, and ciliolate at 10X magnification. The blue corolla is cylindric-oblanceolate, 1-1.5 cm in diameter and slightly open at the summit at anthesis. The purplish to blue lobes are erect and only slightly longer than the plaits.

The best time to identify this species is when it has stems with mature flowers.

This is the only bottle gentian in New York that has long, narrow, ciliate calyx lobes, fringe or "plaits" shorter than the petal lobes so the flowers are not white at the top when closed. Its corolla is slightly open at anthesis. The other two similar species, G. andrewsii and G. clausa have not been seen on the coastal plain in decades.

The plants flower from mid-September to mid-November, one of the latest blooms of the year.

The time of year you would expect to find Soapwort Gentian flowering and fruiting in New York. 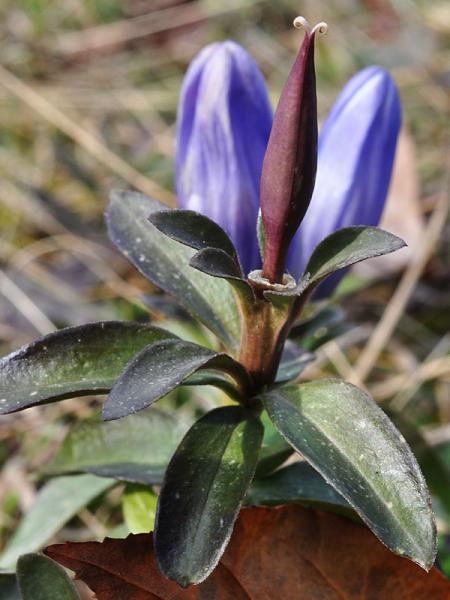