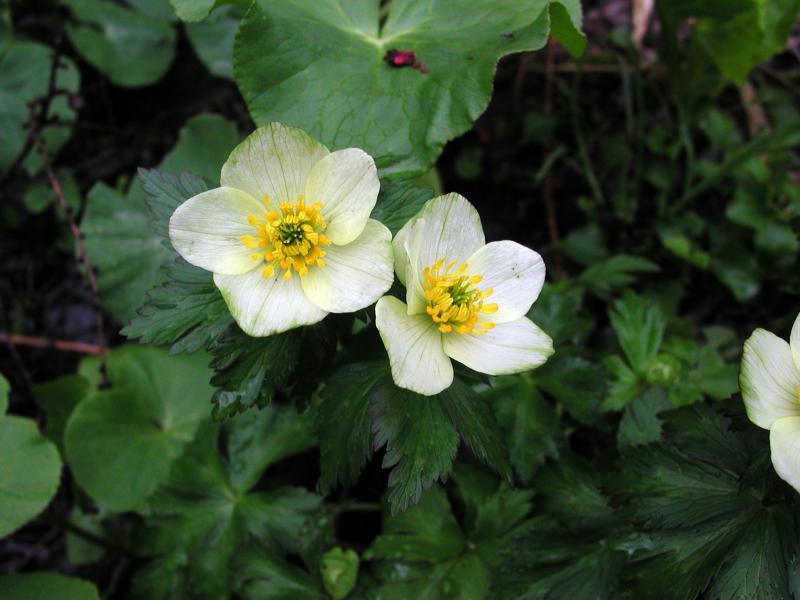 The majority of the world's populations of spreading globeflower are found in central New York. Without these populations, this plant may be listed as a federally endangered/threatened species and at much greater risk to extirpation. Central New York is critical to the long-term protection of this species.

There are approximately 30 known populations of this plant, eight of which are rather small. There are another 31 historical populations, many of which are feared lost. This plant is threatened by habitat succession, changes to water quality, and hydrological changes. The majority of the world's populations are found in New York, so New York is critical to the long-term protection of this species.

While New York is the central range for this species, there has been a marked decline over the past 100 years. This decline has been due to habitat conversion. Approximately 60 populations have been reported over the last 100 years, but today only half that number is known. In the Hudson Valley, the decline has been more dramatic where only one population out of six reported now remains. Even this single remaining population has declined from about 1500 plants in 1990 to an estimated 150-200 plants in 1999. This decline was mainly due to natural succession where shrubs are shading these plants.

It is speculated that prior to European settlement this plant was more common within the same range where it is known today. As wetlands were drained or converted, a number of populations were likely lost. This is certainly what happened to the populations in the southern Hudson Valley and some sites in central/western New York.

The most immediate threat is habitat conversion, particularly due to succession. This wetland plant prefers open areas within wetlands and does not survive well when the area is dominated by shrubs or a heavy tree canopy. In the past, habitat conversion due to wetland draining very likely reduced the number of known populations and potential habitat. The loss of wetlands also created a fragmented habitat where genetic exchange between populations may have been impacted.

As a species that prefers open habitats, some populations may need to have shrubs removed periodically in order to maintain this open habitat. In areas where small populations are present and there is a limited ability of these plants to move around, beaver populations may need to be controlled to prevent the loss of spreading globeflower (Trollius laxus) populations to flooding. However, this would depend on how sensitive the plants are to flooding and the maximum time that the seeds are able to survive in the seed bank. Research is needed to answer these questions.

Research is needed to determine how much hydrological change this plant can tolerate. Also, studies on the ability of this species to seed bank and the maximum time frame the seeds can survive would be useful as some sites are subject to beaver flooding.

This plant ranges from western Connecticut and northern New Jersey, through central New York, western Pennsylvania, and northeastern Ohio. Flora of North America includes Delaware as part of the range, but this report needs further review. Voss (1985) indicates that the Michigan reports are doubtful as vouchers have been annotated to similar looking species.

Spreading globeflower (Trollius laxus) is a low plant, below knee height, with crowded leaves arising on long petioles from the base of the plant. There are five, three-lobed leaflets spreading horizontally from the same point at the top of the petiole. The terminal lobe is longer than the lateral lobes and all have smaller lobes and/or wide but sharp teeth along the margin. The flowering stalks are longer than the leaves and terminate in one flower with five light yellow showy sepals with conspicuous veins, especially the mid vein. There is usually a set of four or five leaflets just below the flower. In the center of the flower are numerous bright yellow stamens that hide the inconspicuous petals and surround the five or more separate fruits.

This early-flowering herbaceous plant has leaves that are 5-7 parted, 5-6 pale greenish-yellow to light lemon-yellow sepals, 15-25 small and inconspicuous petals that are much shorter than the stamens and located around the outer rim of stamens. This plant begins to flower in late April before the trees begin to leaf out and is typically found in calcareous wetlands.

This plant is easiest to identify when in flower, but it may also be identified from fruit or even vegetatively by those very familiar with this species. Any reports should include a photo and a complete description of the habitat.

Marsh marigold (Caltha palustris) has no staminoids (the yellow "petals" on Caltha are actually sepals) and unlobed, rounded leaves. Spreading globeflower (Trollius laxus) has 5-20 well developed narrowly oblong and flat staminoids (true petals), sepals similar in morphology and color to marsh marigold (Caltha), and palmately lobed or dissected leaves. The flowers of Caltha are a much deeper, more shiny, and richer yellow while Trollius flowers are a pale yellow, but field comparison of the flower colors is needed to truly recognize the differences. Difficult to distinguish vegetatively from other swamp species, particularly other buttercups, without significant field experience identifying this species.

This early-flowering plant begins to flower by late April before trees begin to leaf out and is in peak flower during the first few weeks of May. Occasionally flowers may persist into early June, but usually the plants are in full fruit by this time. Fruting and vegetative plants are present until fall, but these are extremely difficult to locate within the other vegetation present. Surveys are best conducted in the first few weeks of May when the flowers are likely to help identify this plant.

The time of year you would expect to find Spreading Globeflower vegetative, flowering, and fruiting in New York. 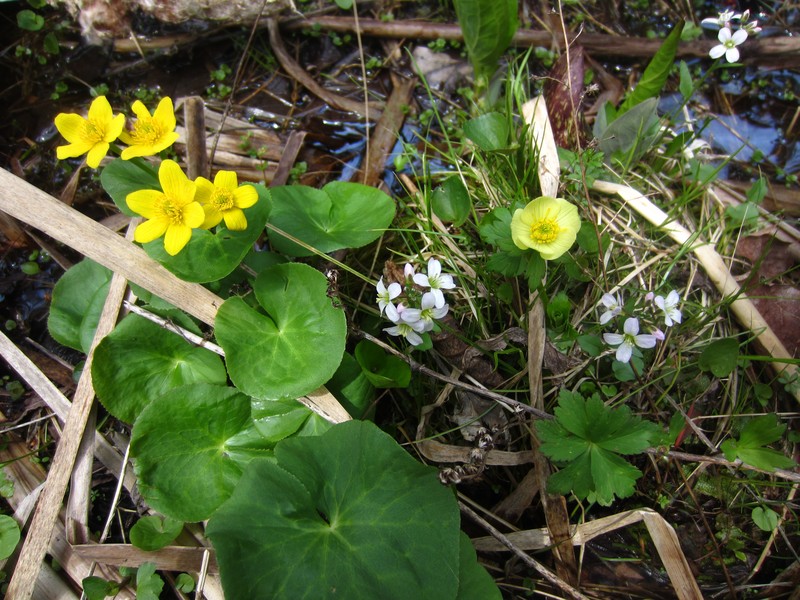 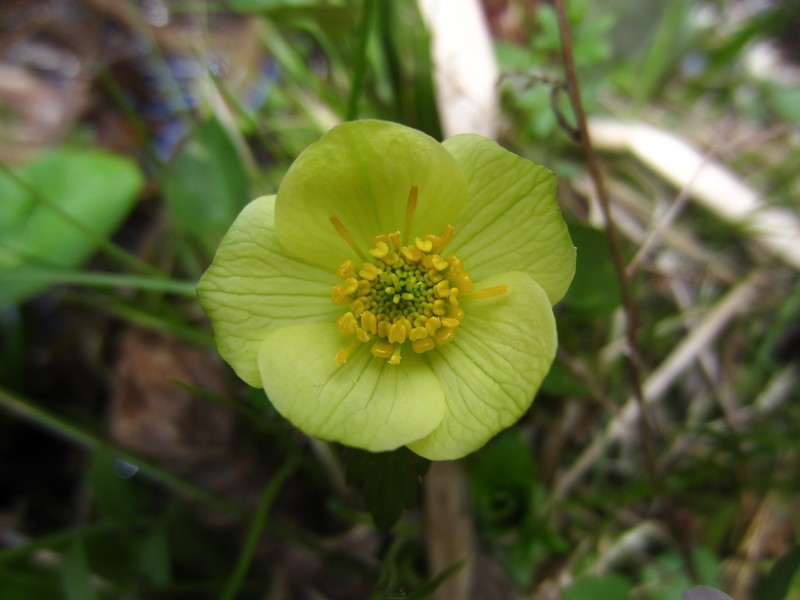 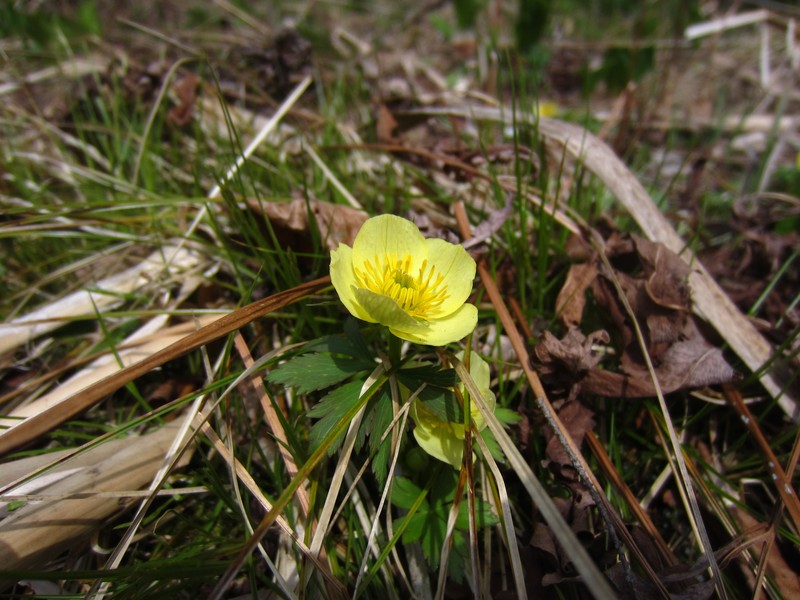 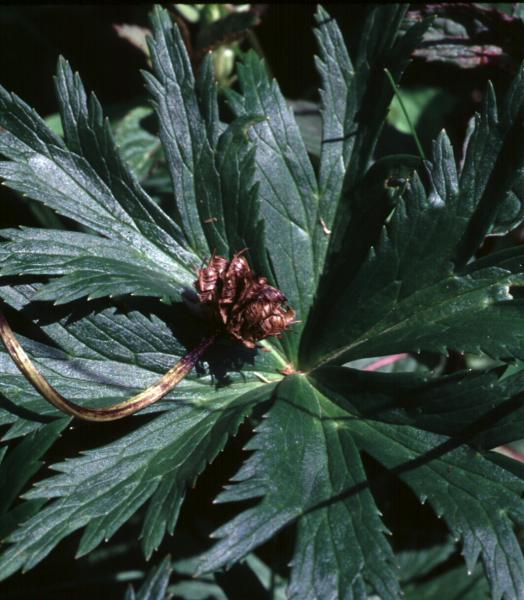 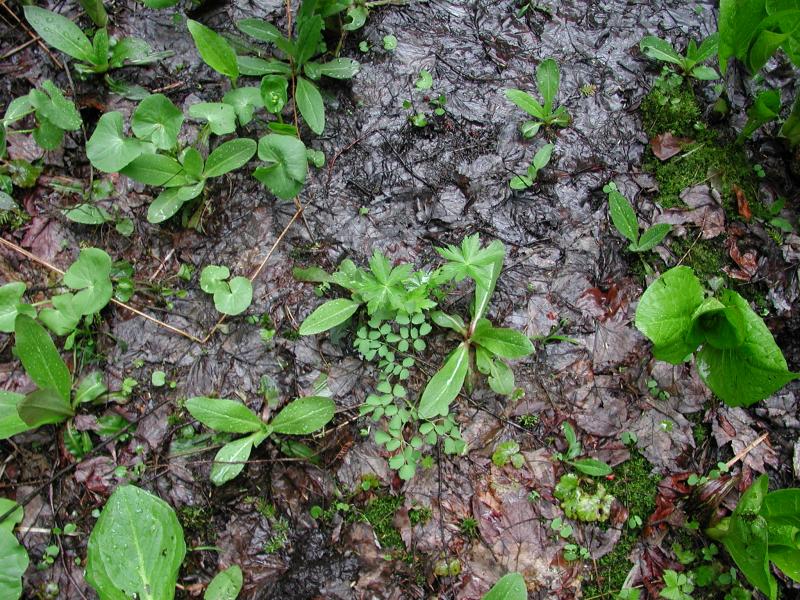 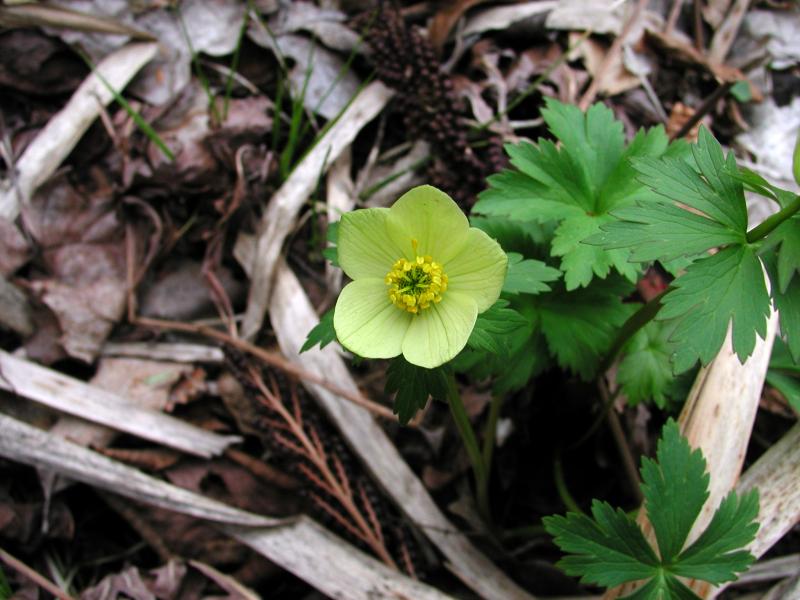 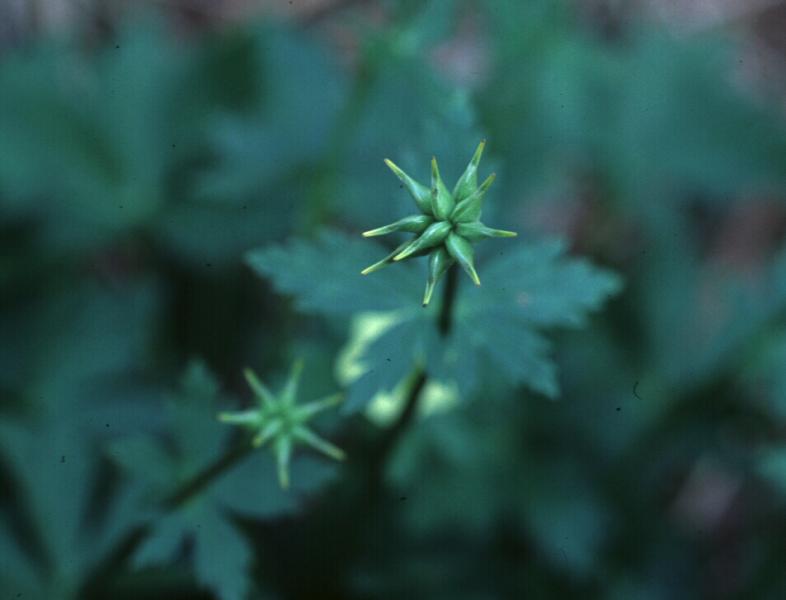 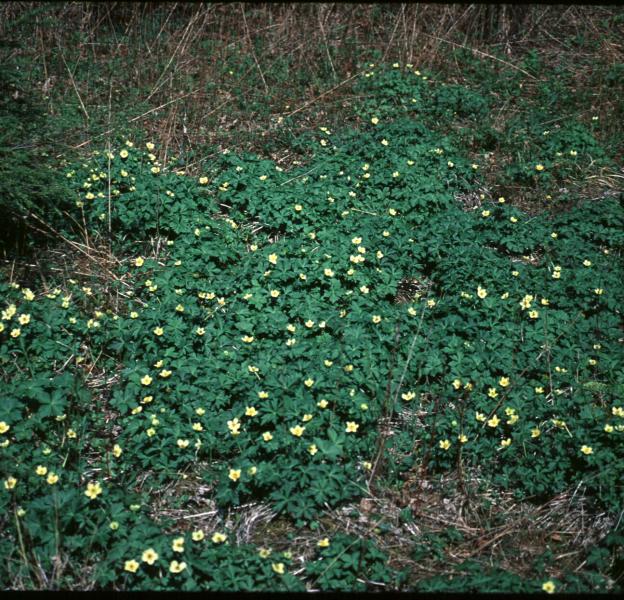 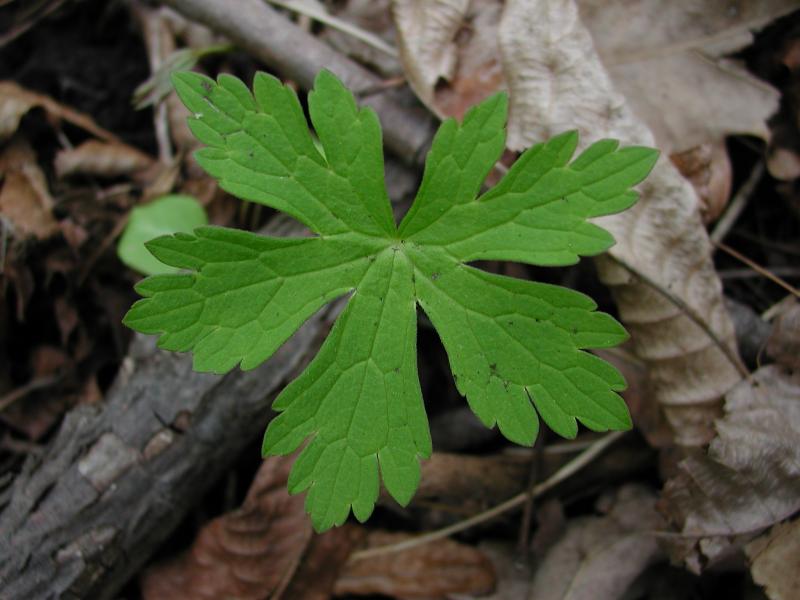 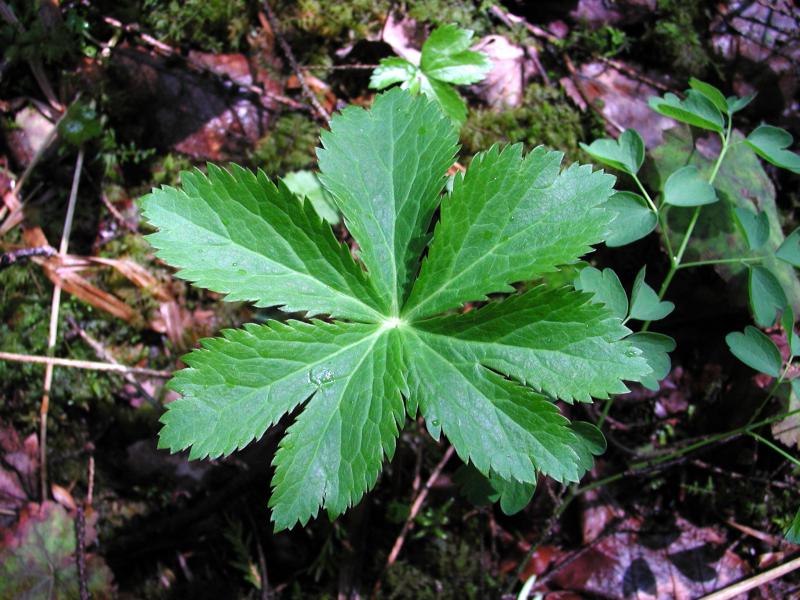 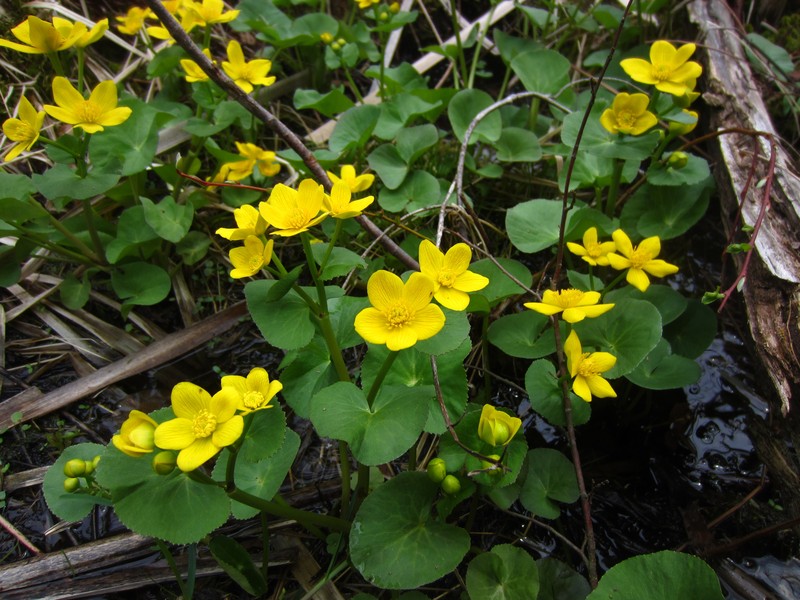 Some sources treat Trollius albiflorus as a subspecies of Trollius laxus. This subspecies is widespread in the the western US and Canada. There are only a few characters separating these two species, so there treatment as subspecies is well justified.