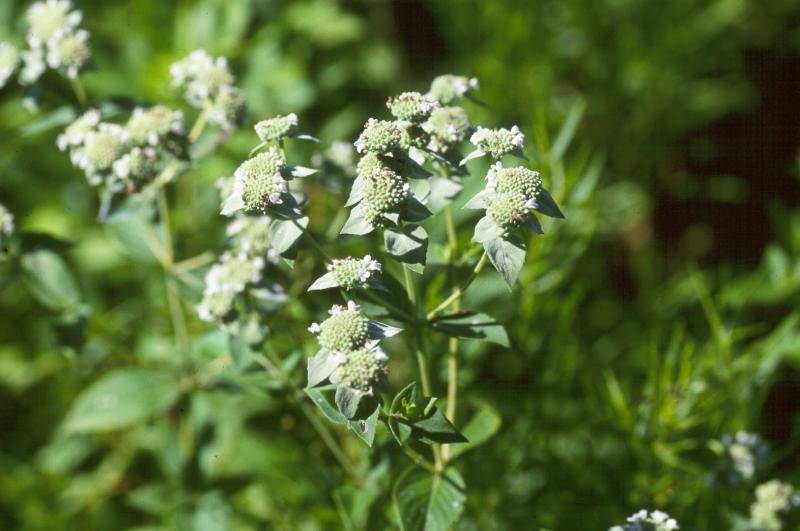 Butterflies favor this plant because it is a good source of nectar. (Pycnanthemum muticum in American Beauties Native Plants fact sheet, accessed 16 November 2007). The leaves have a strong mint fragrance that can even be smelled in museum specimens decades old.

There are 11 existing populations but most of them have fewer than 50 plants. There are about 10 historical records but many of these are from developed areas from New York City to Long Island and around Rochester. More populations could be found as its habitat preferences are better understood.

More survey work is needed to understand the short-term trends since most populations have only been surveyed once.

Most of the original historical records are from areas that have been developed but new populations have been discovered to keep the total number of populations about the same over time.

Avoid mowing plants along roadsides during the growing season. Establish sufficient buffers around populations to preserve the undisturbed aspect and hydrology of their habitat.

Research is needed to determine what is limiting the spread of this species since there seems to be plenty of habitat into which it could grow.

Most of the extant New York populations are located on the South Fork of eastern Long Island. There is also one current record Staten Island and one from Orange County. There are historical records scattered elsewhere in Western New York and up the Hudson Valley to Washington County.

Pycnanthemum muticum is found in all the states east of the Mississippi, excepting Maine (from which it is believed to be extirpated), Indiana, and Wisconsin. It is also found in Texas, Louisiana, Arkansas, and Missouri.

Pycnanthemum muticum is a rhizomatous herb with a branching, pubescent, square stem up to 1 m tall. Like other Mountain-mints it is strongly aromatic, such that a strong spearmint odor from the leaves may be the explorer's first clue to its presence. A main field characteristic of Pycnanthemum muticum is its firm, thick, dark green leaves. These are broadly oval, with a pointed tip, and round or heart-shaped leaf bases. They range from 1 to 4 cm wide and are usually no more than twice as long as wide. The middle stem leaves are typically glabrous to waxy above, while the upper inflorescence leaves are velvety. The flowers are crowded in rounded heads at the top of the stems. They are 2-lipped, the petals are white or pale violet with many purple spots. The teeth of the calyx are all triangular to acuminate (long-pointed).

Blunt Mountain-mint is best identified when flowering or fruiting.

This species flowers in mid-July to early September, with the fruits persisting through the first frost.

The time of year you would expect to find Blunt Mountain Mint flowering and fruiting in New York. 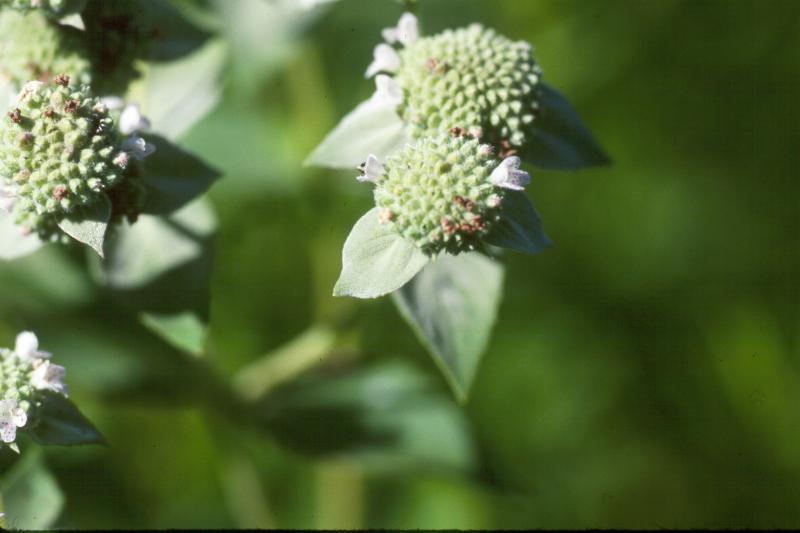 Grant, Elizabeth and Carl Epling. 1943. A study of Pycnanthemum (Labiatae). University Of California Publications in Botany 20: 195-240.