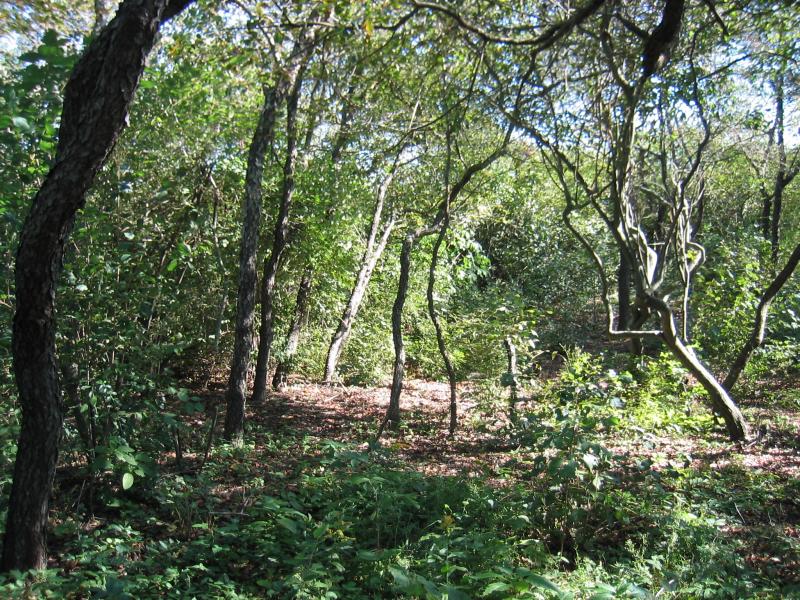 How does salt spray affect plant growth? Salt water is hypertonic for most plant cells. The salt in the salt spray will cause water to be drawn out of the plant cells causing the cells to shrink and die. The higher the concentration of salt, the faster the plant dies. This could cause the tree to be stunted as their canopy dies back from the salt spray or they could grow asymmetrically with the oceanside of the trees dying back and the side furthest from the ocean continuing to grow. Some plants growing near the ocean are actually adapted to the salt spray and can tolerate these conditions better than other plants. Bayberry is an example of this type of plant.

There are less than 3 documented occurrences of this natural community type in New York State. It is predicted that there is the potential for possibly less than 100 total occurrences many of which would be very small in size (acreage) with the total acreage predicted to be less than 400. This maritime forest community is restricted in range to the coastal area of New York on Long Island. The potential habitat of this community is also restricted to areas directly affected by maritime processes, e.g., salt spray and winds. These areas in New York continue to be under significant threat from housing development.

The acreage, extent, and condition of successional maritime forests in New York is probably stable due to the dynamic nature of successional forests in general. As farmland is abandoned or after a mature forest is burned, there will be an increase in the acreage of these successional forest types. Succession would lead to other types of maritime forests however the natural process of salt spray would maintain the community as it is. Large catastrophic events such as storms or human disturbance such as burning or clearing would revert the area back to an earlier successional type. This is a large, intact, slowly succeeding forest, recovering well from historical clearings and with good diversity of successional stages and only minor disturbances. The community is in a landscape relatively large and intact for the coastal region.

The numbers and acreage of successional maritime forests in New York has probably declined over the long-term. These declines were due to the settlement of the area and the subsequent loss of forests due to agricultural, residential and commercial development.

The threats to successional maritime forests include development pressure, invasive species, and deer browse. An increase in residential and commercial development causes fragmentation of the natural forest and a decrease in the size of the forest block into smaller and smaller units. Development and new roads also increase the potential for the invasion of exotic species that will out compete the native ones. These forests can also experience excessive deer browse on seedlings and saplings that can prevent the regeneration and establishment of mature forest trees.

To promote a dynamic forest mosaic, allow natural processes, including gap formation from blowdowns and tree mortality as well as in-place decomposition of fallen coarse woody debris and standing snags, to operate (Spies and Turner 1999). Generally, management should focus on activities that help maintain regeneration of the species associated with this community. The natural maritime influence should be maintained including salt spray. Management efforts should focus on the control or local eradication of invasive exotic plants and the reduction of white-tailed deer densities. Consider deer exclosures or population management, particularly if studies confirm that canopy species recruitment is being affected by heavy browse. Deer have been shown to have negative effects on forest understories (Miller et al. 1992, Augustine and French 1998, Knight 2003) and management efforts should strive to ensure that tree and shrub seedlings are not so heavily browsed that they cannot replace overstory trees.

Additional inventory is needed to confirm the extent of this community type and to map the least disturbed cores. It would also be useful to map and identify salt spray areas. Inventory and plots are also needed to improve the species lists (both plant and animal) and to better document the natural community.The spread of invasive species also needs to be monitored.

Research is needed to document the successional trend to a mature forest type and the impact of deer browse.

This natural community is restricted to maritime portion of the coastal lowlands region. The forest occurs on sheltered backdunes, bluffs, or more interior coastal areas not directly influenced by overwash but affected by salt spray and wind-pruning. Known examples range from Caswell Cliff on Montauk Point, west to Friars Head on the North Shore of Long Island and Sunken Forest on the South Shore of Long Island. Other examples are expected as far west as the Tottenville area of Staten Island and bordering the bays at the western headwaters of Long Island Sound.

These forests occur along the North Atlantic Coast from Delaware to New Hampshire with the possibility of occuring further north into Maine.

This is a successional hardwood forest that occurs in low areas near the seacoast. This forest is a variable type that develops after vegetation has burned or land cleared (such as pastureland or farm fields). The trees may be somewhat stunted and flat-topped because the canopies are pruned by salt spray. The forest may be dominated by a single species, or there may be two or three codominants.This forest represents an earlier seral stage of other maritime forests, such as maritime post oak forest, maritime holly forest, maritime red cedar forest, and probably others. Soil and moisture regime will usually determine which forest type succeeds from this community. A few disturbance-climax examples occur, maintained by severe and constant salt spray.

Known examples of this community have been found at elevations between 5 feet and 105 feet.

The fall season brings migrating landbirds to this natural community, sometimes in great numbers and species following the passage of a northwest cold front, and the birds take advantage of the cover and food opportunities that remain due to the extended growing season of coastal habitats. 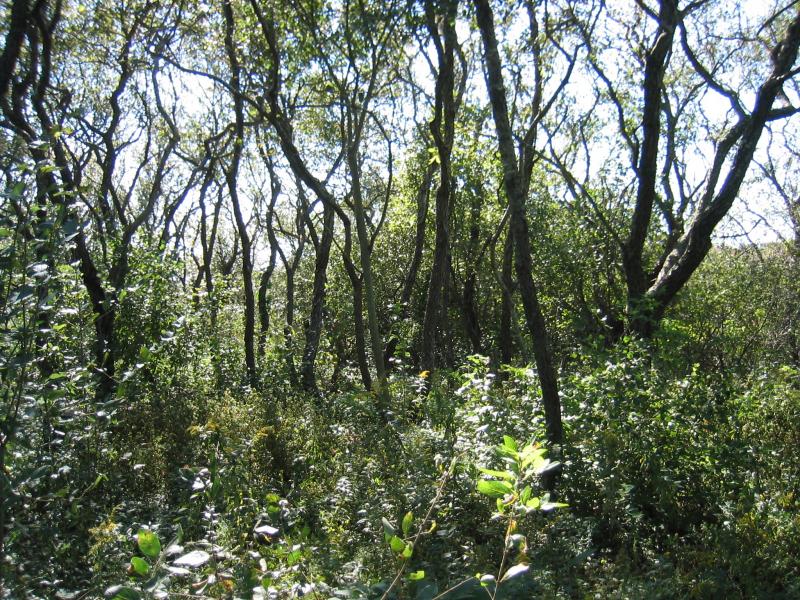 This figure helps visualize the structure and "look" or "feel" of a typical Successional Maritime Forest. Each bar represents the amount of "coverage" for all the species growing at that height. Because layers overlap (shrubs may grow under trees, for example), the shaded regions can add up to more than 100%.